The Nikon D810a is a high-resolution, semi-pro DSLR that’s dedicated to astrophotography. It’s based on the Nikon D810. Key features include:

Modified For Astrophotography. This modified version of the D810 features an optical IR-cut filter that passes H-alpha (656.28nm) wavelengths, enabling nebulae and other astronomical phenomena to be captured without unwanted infrared contamination. There’s also the M* (Long Exposure Manual Mode) that provides greater control when making exposures in excess of 30 seconds, giving you presets for 4-900 seconds. Additionally, a Virtual Live View Exposure Preview displays a virtual preview on the rear LCD when exposing for 30 seconds or longer, and the base ISO has been raised to 200.

Different But The Same. Other than the above differences, the D810 and D810a are the same. With that said, everything below is pulled directly from our D810 page.

36.3MP FX-Format CMOS Sensor. The D810a features an updated 36.3MP sensor with no optical low-pass filter, maximizing image sharpness. This updated sensor offers improved ISO performance with a normal range of 64-12,800, while the EXPEED 4 processor first seen in the D4s provides 30% faster performance that the D800/800E.

Enhanced Autofocus. It’s technically the same Multi-Cam 3500-FX AF sensor seen in the D800/800E, but it’s been tweaked to give better accuracy and speed. There’s 51 AF points to choose from, with 15 being of cross-type AF sensors, and the Group Area AF mode has trickled down from the D4s.

Other Notable Improvements. The D810a has an improved 3.2-inch LCD with 1,229k-dot resolution. You can use it to display the new “split-screen zoom” mode for checking focus on two different points in live view. The large optical viewfinder has an OLED info display, and you can use face detection while shooting through the OVF. Shooting speed has been improved: the D810a offers a max 5 fps in FX mode and 7 fps in DX mode (MB-D12 battery grip required for DX increase). This camera adds the highly desired S-RAW that enables 9MP image capture, as well as an electronic first-curtain shutter and redesigned mirror mechanism for minimizing shutter shock. The D810a still uses the same Nikon EN-EL15 battery that’s rated for 1,200 shots per charge, and the dual CF/SD memory card slot remains. 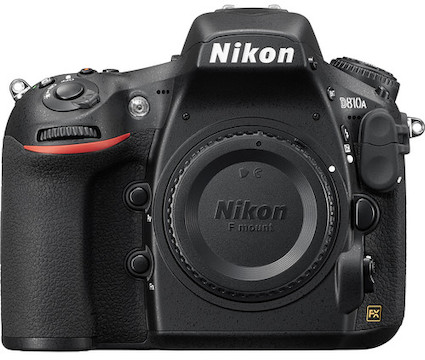 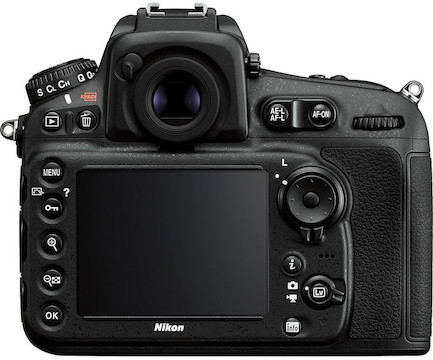 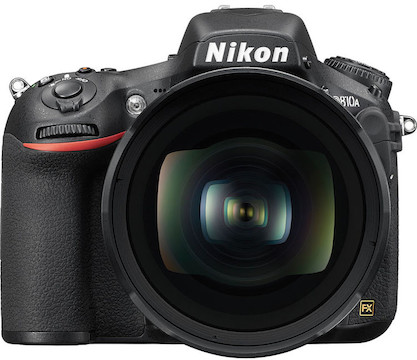