The Nikon SB-910 Speedlight is a legacy flagship hotshoe flash. Its direct replacement is the Nikon SB-5000 Speedlight, which also happens to be less expensive to rent. Key features include:

Simplified, Intuitive GUI. The Nikon SB-910 Speedlight has a simplified graphic user interface (GUI) that allows for easy control and navigation, all while providing the same power output as its predecessor. This time around, Nikon included a dedicated Menu button, which means no more complicated button-mashing to program your advanced settings.

Improved Thermal Protection. It has an improved thermal protection system that slows recycle time during rapid firing instead of just shutting down the flash.

17-220mm Zoom Range. You have a zoom range of 17-200mm (35mm equivalent) than can either be manually set or automatically adjust with your lens.

Three Illumination Patterns. There are three different light-distribution patterns that allow you to make adjustments based on what you’re shooting.

Wireless Operation. The SB-910 can work as a stand-alone flash or as part of a wireless group, either in commander mode or as a replica (remote). This flash’s i-TTL system supports Advanced Wireless Lighting and versatile functions for up to four groups of Speedlights, meaning that the master SB-910 can control three remote i-TTL Speedlight groups. The i-TTL Balanced Fill-Flash flash control employs Nikon’s Advanced Data Communication System, which provides an improved method for monitoring pre-flash and wireless operation.

Two Hard Filters Included. There are now hard filters for fluorescent and tungsten lighting, and the flash will automatically change the camera’s white balance to match the filter in use.


The SB-910 is Nikon’s former flagship speedlight. It’s still very capable, but the SB-5000 does everything it did and more. If you have your own SB-910, you are probably still covered for everyth...

The SB-910 is Nikon’s former flagship speedlight. It’s still very capable, but the SB-5000 does everything it did and more. If you have your own SB-910, you are probably still covered for everything you would need a flagship speedlight for. If you are starting fresh or need to supplement your current flash setup, I would go for the SB-5000 with its faster recycle time and better thermal management system hands down. 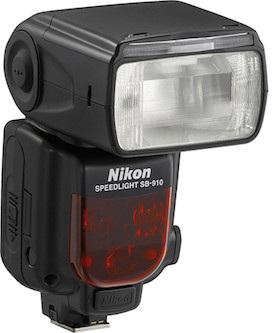