The Olympus OM-D E-M10 Mark IV is a budget-friendly, easy-to-use Micro 4/3 camera that incorporates some of Olympus’s flagship features into the compact E-M10 series body design. Key features include:

Five-Axis Image Stabilization. Like much of the Olympus lineup, the OM-D E-M10 IV features in-body five-axis sensor-shift image stabilization that applies up to 4.5 stops of correction applied to any lens mounted, which makes camera shake much less of a concern.

Build and Ergonomics. While this camera’s body is largely plastic and it’s not weather-sealed, it’s extremely lightweight and has a revised grip design that’ll fit in your hands more securely. The buttons and dials are high quality and the control layout is improved. The Mark IV has a 3.0-inch, 1.04m-dot touchscreen rear LCD with an 80° upward and 180° downward tilting design that’s designed for perfectly framed selfies. The large 2.36m-dot OLED electronic viewfinder is great for eye-level monitoring, and its 0.67x maximum magnification makes sure your view is distortion-free.

Other Notable Features. The E-M10 Mark IV balances beginner-level, user-friendly auto and art modes quite well with the button customization and manual controls desired by advanced amateur and prosumer users. Live Bulb/Live Time settings are also available to those who want to try their hand. There’s built-in Wi-Fi and Bluetooth, letting you use the OI.Share app for wireless image transfer and camera control via smartphone or tablet. Interval shooting is supported for up to 999 frames with 1-second to 24-hour exposure intervals. This camera records images and video to UHS-II SDHC/XC memory cards via its single card slot, and the included BLS-50 battery is rated for roughly 360 shots per charge. 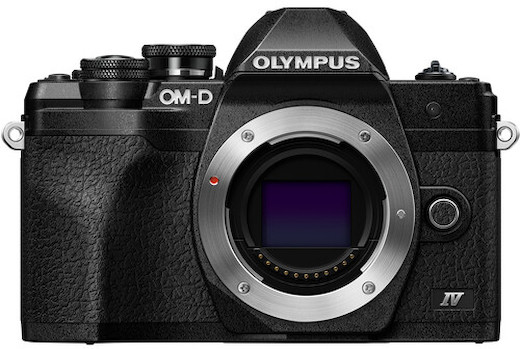