The Nikon D6 is a fast, versatile, pro-grade DSLR, and a serious update to the Nikon D5 CF and XQD. Key features include:

High Sensitivity and Shooting Rates. The D6 carries over its predecessor’s 20.8MP full-frame sensor, but pairs it with an updated EXPEED 6 processor to give you a native ISO range of 100-102,400. That not fast enough for you? Don’t worry; it’s expandable to 50-3,280,000! Now you can shoot those glamour portraits lit by the glow of your smartphone in your pocket. This sensor and processor combination also gives you a top continuous shooting rate of 14 fps for up to 200 consecutive frames, a silent 10.5 fps rate for when discretion is key, and up to 60 fps shooting at 2MP or 30 fps shooting at 8MP.

Revised 105-Point All Cross-Type Autofocus System. The D6’s new Multi-CAM 37K autofocus system increases the AF coverage area to 1.6x that of previous models’ for even faster performance. It uses an array of 105 cross-type AF points that quickly and accurately obtains focus across the frame in a wide range of lighting conditions, while 17 custom Group Area AF settings let you set and maintain focus on your subjects even when they’re moving quickly or in busy surroundings. On top of that, there are seven selectable AF-area modes, each of which is designed to handle different types of subject matter. You can use the AF lock-on function to even further improve subject tracking, while the auto AF fine-tune feature lets you first manually adjust focus in live view for additional precision, after which the AF system will calibrate itself to the new position.

UHD 4K Video. The D6 is capable of in-camera 4K UHD recording at 24/25/30p (DX crop only), Full HD up to 1080/60p, and uncompressed output to an external recorder via HDMI mini input. As with still shooting, you get a broad range of sensitivities that let you capture video in bright and low light, and you can manually adjust the extended 50-3,280,000 ISO values through a dedicated movie-shooting menu. You can capture stereo audio in-camera or externally via 1/8-inch mic input, while a separate 1/8-inch headphone input and 20-step manual adjustment enables precision audio monitoring. Still no focus peaking or zebra warnings, so we recommend using an external electronic viewfinder/video monitor with those features.

Additional Features. The pro-grade D6 carries over much of the physical design from the D5, and that’s definitely a good thing. Its magnesium-alloy body features a built-in vertical grip; elaborate weather-sealing; multiple customizable buttons; a bright 0.72x optical pentaprism with 100% viewfinder coverage; and a 3.2-inch, touch-sensitive, 2.36m-dot rear LCD with familiar smartphone-like navigation. The D6 is powered by an EN-EL18c battery, which is rated at approximately 3580 shots per charge, and, unlike its predecessor, it has two CFexpress Type B / XQD memory-card slots. Built-in Wi-Fi and Bluetooth pair with Snapbridge, allowing you to remotely control the camera and transfer files with ease. 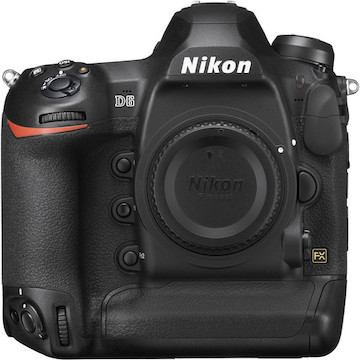 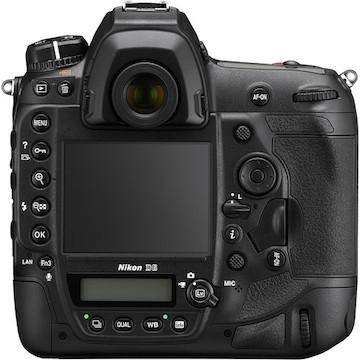