This is a 5-pack of the SanDisk SDHC 32GB Extreme 90MB/s UHS-1 V30 memory cards. If you’re going to need multiple cards, this kit saves a few clicks (and $$$). Key features include:

Reasonably Fast Read and Write Speeds. Thanks to the 90MB/s read speed, large amounts of data can be downloaded to a computer with minimal bottleneck. The 40MB/s write speed is fast enough for general still photography (not continuous shooting) and basic video use.

Video Compatibility. While these cards technically offer accelerated minimum sustained write speeds that make them video-ready for consumer-grade use, we strongly advise against using them for professional shoots. A 40MB/s write speed is generally fine for HD video (although there’s still the likelihood of buffer bottleneck), but fancy marketing isn’t going to help you when you’re in the middle of a shoot and the memory cards can’t keep up. 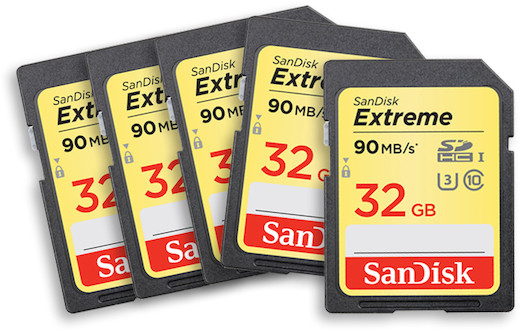