The SanDisk SDXC 512GB Extreme Pro 170MB/s UHS-1 U3 is an SD memory card that’s designed for capturing both still and video files. Key features include:

Please Note. Just because this card is 512GB in size doesn’t mean you should fill it up without a backup. It’s best to not put all of your eggs in one basket! 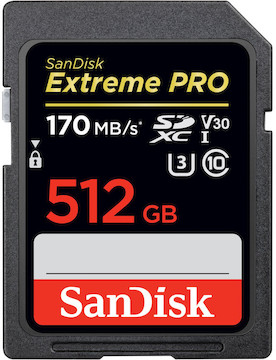