The SanDisk 64GB Extreme Pro 95MB/s UHS-1 U3 SDXC is a SD memory card that’s designed for capturing both still and video files. This is an older generation memory card that does not have a speed class rating of V30. Key features include:

PLEASE NOTE This is an older generation memory card that does not have a speed class rating of V30. There may be compatibility issues with newer cameras. With the exception of the cameras listed below, we suggest the SanDisk SDXC 128GB Extreme Pro 170MB/s UHS-1 U3 instead. 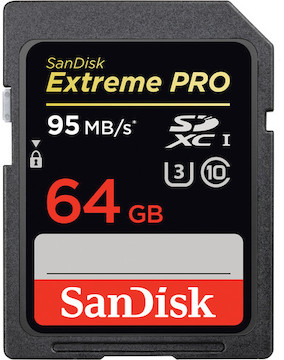