Teradek Bolt Wireless System. The Teradek Bolt 4K lineup consists of various Bolt 4K modules with different wireless ranges and battery plates, designed for use with SmallHD’s Smart 7 series monitors. As a result, we have quite a few configurations in this ecosystem, with this listing being for the 702 Touch monitor paired with a Bolt 4K 1500 TX. All Bolt 4K modules are cross compatible, meaning no matter which versions you choose for your workflow, they’ll work together.

Wireless On-Set Monitoring. This Teradek Bolt 4K transmitter can transmit 4K, 30fps footage up to 1500-feet away to 6 Bolt 4K receivers simultaneously with less than 0.001 seconds of latency. That’s faster than the human eye can blink!

Compatible With All Bolt 4K Modules. In case you glossed over it before, all Teradek Bolt 4K modules are cross compatible, meaning this kit will work with any Bolt 4K receiver, so even if you have different Bolt 4K modules, they’ll work together seamlessly.

SmallHD 702 Touch. This full HD, 1920 × 1200, IPS touchscreen, LCD monitor provides an extremely sharp image with a 323 ppi pixel density. Despite being an LCD, the 702 is able to produce 100% of the DCI-P3 RBG color space (26% greater than the REC. 709 color standard), rivaling OLED technology’s color capabilities.

Brightness for Days. The Small HD 702 Touch’s display is rated at 1500 nits brightness with a super wide 179° viewing angle, making it useable from the darkest corners of your set to broad daylight.

Power. This monitor can only be powered via the included d-tap cable and a d-tap power source (not included). No battery plate is included with this rental. 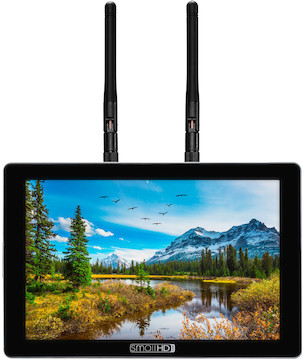 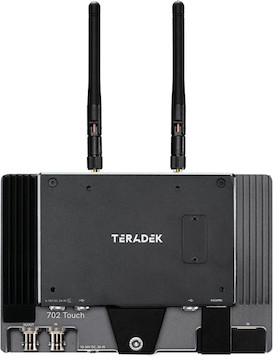