Teradek Bolt Wireless System. The Teradek Bolt 4K lineup consists of various Bolt 4K modules with different wireless ranges and battery plates, designed for use with SmallHD’s Smart 7 series monitors. As a result, we have quite a few configurations in this ecosystem, with this listing being for the INDIE 7 monitor paired with a Bolt 4K 1500 TX. All Bolt 4K modules are cross compatible, meaning no matter which versions you choose for your workflow, they’ll work together.

Wireless On-Set Monitoring. This Teradek Bolt 4K transmitter can transmit 4K, 30fps footage up to 1500-feet away to 6 Bolt 4K receivers simultaneously with less than 0.001 seconds of latency. That’s faster than the human eye can blink! The Bolt 4K RX contains an HDMI adapter that plugs directly into the HDMI input on the SmallHD monitor, so no need for any extra cables.

Compatible With All Bolt 4K Modules. In case you glossed over it before, all Teradek Bolt 4K modules are cross compatible, meaning this kit will work with any Bolt 4K receiver, so even if you have different Bolt 4K modules, they’ll work together seamlessly.

Feature-Rich PageOS 4 Toolset. Expanded options include the output of 3D LUT previews to downstream devices, image capture, overlays, custom scaling, anamorphic desqueeze, peaking, false color, Waveform, Zebras, RGB parade, histogram, and on-screen audio meters. An SD card slot lets you add custom LUTs, and save and share settings to other monitors. Please note that this rental doesn’t include an SD card.
Power. This monitor can only be powered via the included d-tap cable and a d-tap power source (not included). No battery plate is included with this rental. 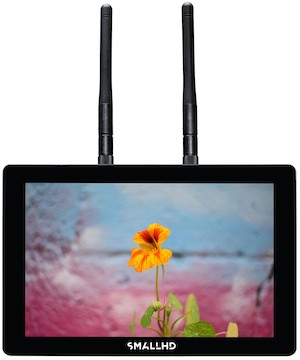 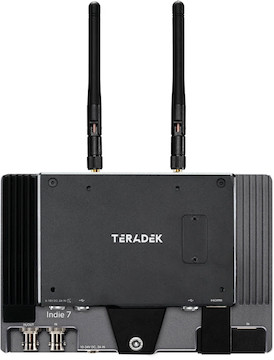