The Sony Cyber-shot RX1R is a compact point-and-shoot camera that features a 35mm full-frame sensor. It’s essentially the same camera as the Sony RX1, minus the anti-aliasing filter. Key features include:

The Sony Cyber-shot RX1R is a compact point-and-shoot camera that features a 35mm full-frame sensor. It’s essentially the same camera as the Sony RX1, minus the anti-aliasing filter.

This 24.3MP sensor, also found in the Sony A99 and Sony NEX-VG900, provides high image quality with great low light performance. With the removal of the AA filter, you’ll see sharper images out of the camera, but you may lose some moiré. This difference aside, the RX1 and RX1R are the same camera.

While the fixed Carl Zeiss 35mm f/2 Sonnar lens is non-removable, it’s a very popular focal length that can be used in just about any shooting situation. The fast f/2 aperture allows great background separation and the flexibility to shoot in low light. It offers quick and extremely accurate autofocus performance and includes Sony’s great focus peaking for truly simple manual focusing.

While it’s more commonly thought of as a still camera, the RX1R also offers great video performance. It records full HD video at up to 60p, with a selectable 24p mode as well. Video files are recorded in AVCHD 2.0 format, and there’s a built-in stereo mic for quick and easy use. It also features a 3.5mm external-mic input for improved audio performance.

At first glance, the RX1R looks quite similar to its baby brother, the Sony RX100. It has the same user-friendly menu system and simple control layout as the other models in Sony’s RX series. The lens has dedicated control focus, aperture, and macro-mode rings for quick adjustment while shooting, and the Quick Navi menu enables more intense setting adjustment.

The RX1R has Sony’s multi-interface hot shoe that allows you to use external flashes like the Sony HVL-F60M. While the large 3.0-inch rear LCD works well for image composition and review, many people many prefer the optional FDA-EV1MK Electronic Viewfinder for improved shooting. The RX1R accepts SDHC/XC memory cards for recording its high-quality JPEG/RAW image files, and the included NP-BX1 rechargeable lithium battery is rated for roughly 330 shots per charge. 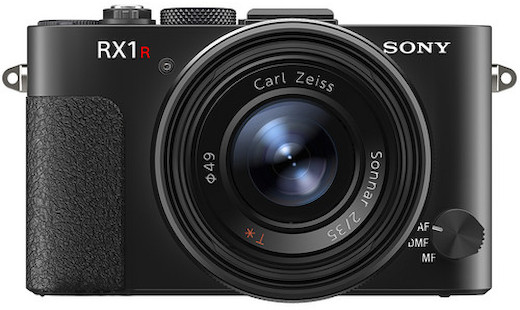