Tyler has an amazing ability to purchase hard to find items and get them to Lensrentals. Today he amazed even me —  a brand new Panasonic 12-35 f/2.8 OIS lens arrived when, in theory at least, there are none available anywhere in the U. S. None of us know how he does it. I’m pretty sure none of us want to know how he does it. I have it on good authority, though, that this particular lens traveled by donkey, dugout canoe, camel, and pirate ship to get here. 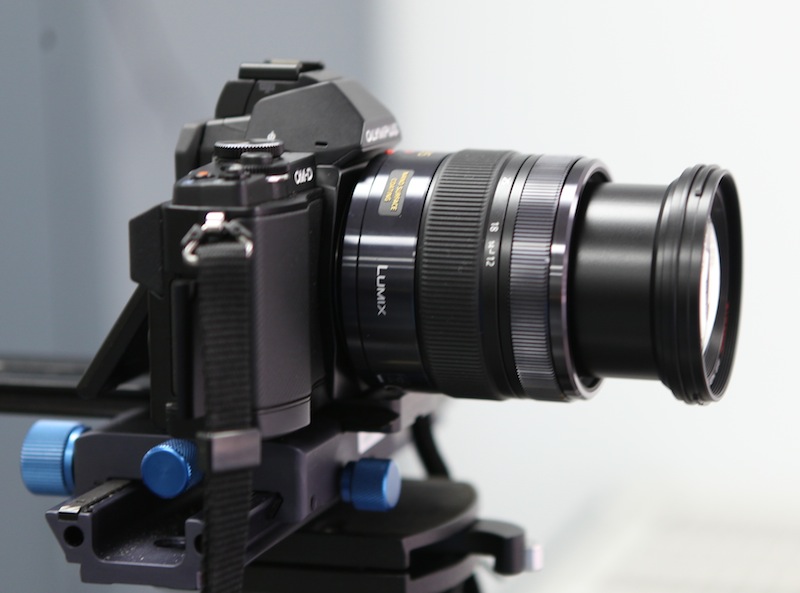 You may have noticed that it’s not listed for rent yet. That’s because since it has travelled such a great, and largely undocumented, distance that I would not want our renters subjected to the possible risk that it carries some strange emerging disease or other. Falling back on my barely-remembered medical training I have decided it must be quarantined for 14 days to assure that it is safe before it will be available to rent. No need to thank me. Your safety is my only concern.

To make doubly certain the lens doesn’t contain some jungle fungus that might damage your camera, I have decided it will stay mounted to my ‘camera of the month’, the Olympus OM-D I spoke of a couple of posts ago.  That way, by the time it actually goes out to rent, you can be assured that the lens is indeed safe not only for humans, but also for their cameras. As long as it has mounted to my camera for safety reasons, it seems reasonable to do a bit of testing with it. Perhaps even some photography.

I try to acknowledge on the front end what my expectations for a lens are, because they will inevitably affect my opinion of it. In this case, I was hoping to find the equivalent of the 24-70 f/2.8 that is among my most used lenses when I shoot with SLRs. I did not expect “prime-like” sharpness, but I certainly hoped the lens, at f/2.8, would be as good as the existing m4/3 zooms were at their f/4 to f/5.6 or so apertures. Since I would be shooting on my Olympus OM-D, I was also hoping distortion and aberrations wouldn’t be too severe, since I would not have in-camera correction. (Or perhaps would have less in-camera correction as someone correctly pointed out. I’m still not exactly sure what kind of things Olympus and Panasonic cameras do with the other brand’s lenses.)

I only have one copy of the 12-35 so I’m not able to report on a number of different copies as I’d like to. But the Imatest numbers are excellent and I’ve checked the lens thoroughly. I’m quite comfortable this is a good copy. For comparison purposes, I’m listing the results of the 12-35 done at both 12mm and 35mm and have put some of our previous results with other lenses in the table for easy comparison. As always, these are MTF50 numbers, the first number being peak center resolution, the second average resolution over the entire sensor.

I put the 12-35 results at f/2.8 first and at f/4 last, with an assortment of other zooms and primes and the aperture and focal length they were tested at in between. (There is a nice new feature in the table, though, that lets you sort it differently if you’d like.) This is supposed to be a ‘professional’ quality zoom, and I think the results support that claim. The resolution numbers for the 12-35 at f/2.8 are exactly what I would expect: better than the consumer-grade zooms shot at their widest apertures, not as good as the best primes shot at f/2.8. Its results are very comparable to the Panasonic 7-14 f/4 zoom, which until now has clearly been the best of the m4/3 zooms.

The Imatest results met my expectations, but didn’t exceed them. The resolution of the lens is quite good, particularly on the edges and corners. Given the price I would expect just that.

I find the size very reasonable for an f/2.8 zoom. The AF is fast and accurate (and this is on an Olympus camera — it might be even better on a Panasonic, but I no particular reason to think that is so). The manual focus and zoom rings are reasonably thick and have a nice, smooth feels to them. I could manually focus quite accurately and easily. The hood is included, which it should be at this price. It’s a petal-type hood and not very deep, though, and if there’s sun in your field-of-view the flare can be rather dramatic. 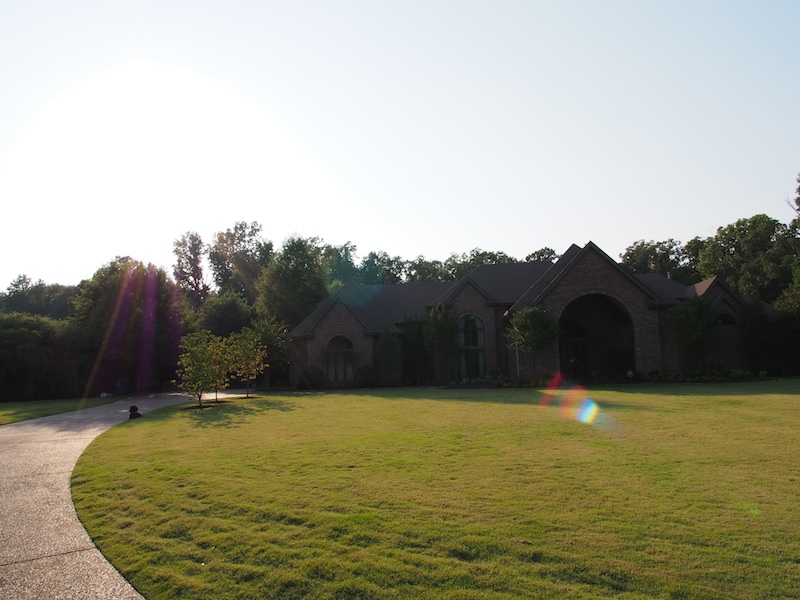 I’m not a professional reviewer. I don’t have the patience or the skill set for that. But in this case I had a real question I wanted answered. I’m using my m4/3 camera more and more for everyday shooting. I wanted to know if the OM-D with Panasonic 12-35 f/2.8 would be a reasonable replacement for a Canon 5D Mk III with 24-70 f/2.8 for everyday shooting. I considered that a reasonable choice: the Canon lens is about the same price as this Panasonic. It’s not the greatest zoom available, being a bit dated and soon to be replaced, but it’s certainly good and I use it a lot. I didn’t think a comparison with a D800E with Nikon 24-70 was really reasonable; I’m pretty sure I know the answer on that one without testing. There’s also the point about having a Canon setup handy, and not having the Nikon readily available.

Not having the time or inclination to wander around creating artistic photographs for comparison purposes I just spent some time shooting what was available, taking the same shot with both cameras. Again, these aren’t tripod-mounted, mirror-lock-up critically measured photographs. They’re simply some handheld-from-the-same-position shots, in plenty of sunlight, trying to answer my own question “how much will I lose carrying the OM-D with 12-35 f/2.8 and leaving the big camera at home”. (As an aside, though, I will mention that doing this does reinforce just how damn fast an SLR focuses and shoots compared to even the best of mirrorless cameras. That’s certainly not critical for my kind of shooting, but it was noticeable, and may be more critical for some of you.)

Of course, like most of my great ideas, this one wasn’t well thought through and from the first image it became apparent this couldn’t be a simple comparison. Not only the megapixel difference, but also the sensor shape were going to result in slightly different images when taken from the same spot at equivalent focal lengths. The two shots below, taken from the same spot at 12mm for the Panasonic (top) and 24mm for the Canon (bottom) illustrate it rather nicely. 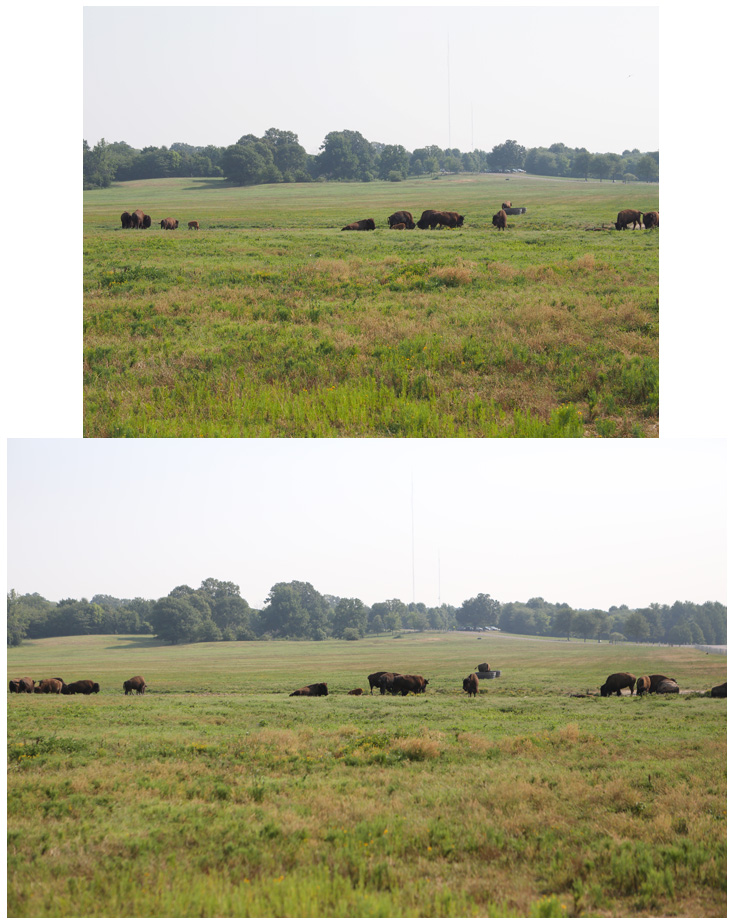 But still, I could make some 100% crops and see if there was noticeable difference in the image quality. Can’t say I see much difference in the center except the buffalo moved a bit while I changed cameras, as buffalo often do. 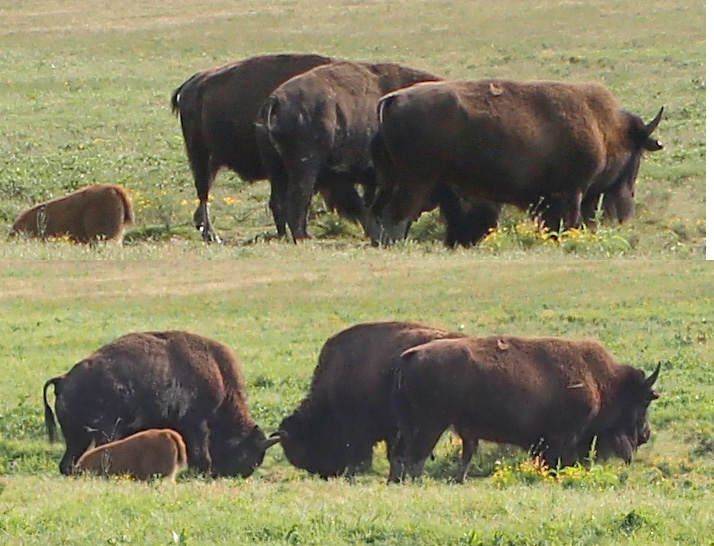 It was hot and the buffalo didn’t seem very interested in anything but grass and water, so I got a bit closer and took some 70mm shots. 100% crops from the center are pretty similar, but remember, the Canon shot (bottom) is cropped more heavily than the Panasonic shot (top). My reason for this was along the lines of “if I’m shooting the same subject of interest at maximum focal length, what will I get” rather than comparing resolution directly. To me, the detail is about the same. This crop does emphasize another difference though: look at the grass in the background to see the difference in depth of field. 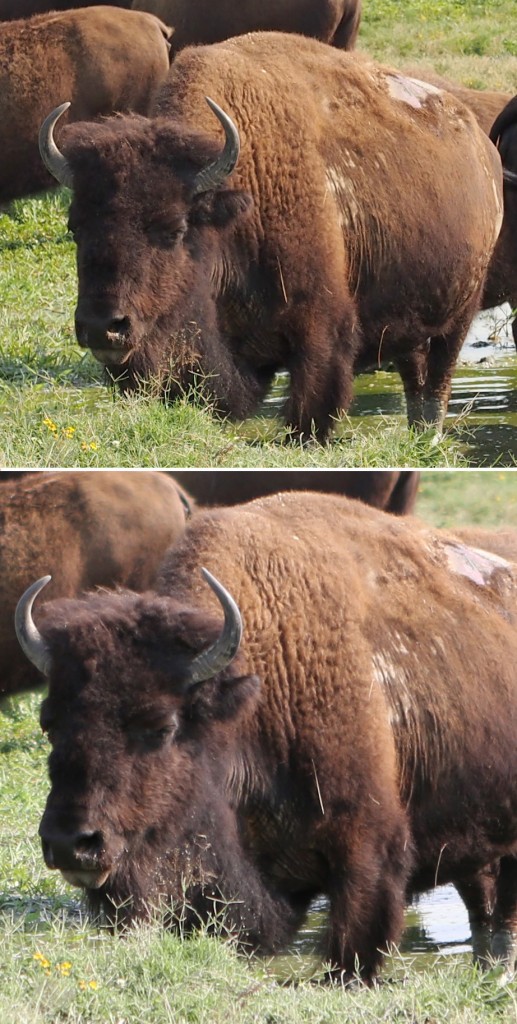 To try comparing the edges of the frame a bit more accurately, I framed this shot so the house framed the same side-to-side (obviously they couldn’t be the same vertically since the sensors are different shapes). 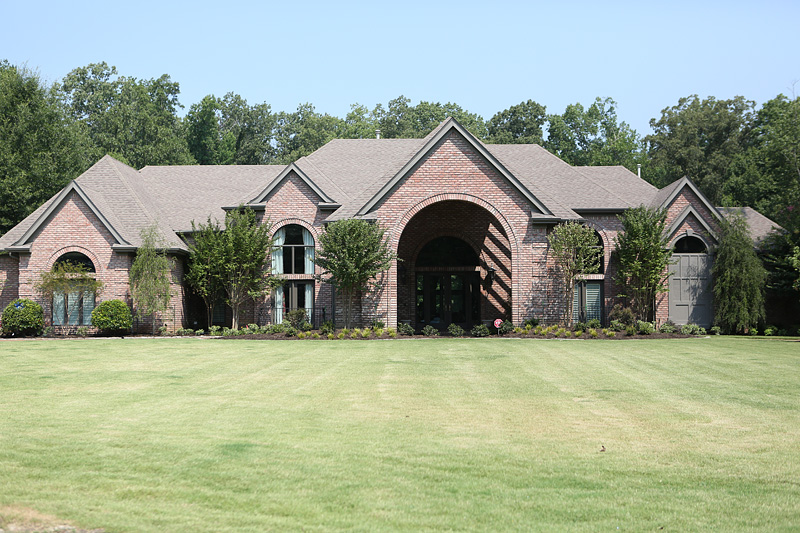 Comparing 100% crops from the center and either side was fairly straightforward. 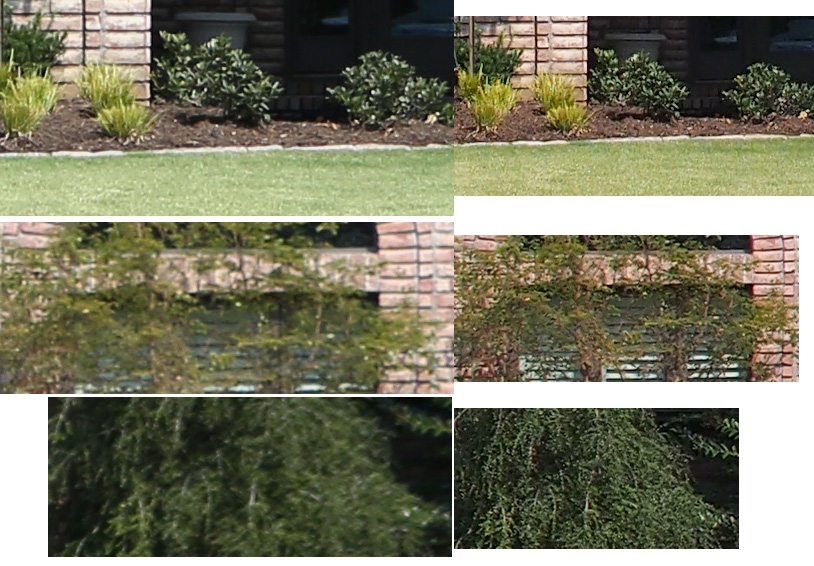 100% crops from center, left, and right sides, with Panasonic on the right, Canon left.

The Canon has more pixels dedicated to each feature, so while the sides of the Canon images certainly look softer on my monitor, that may not be the case if we were printing the same-sized image from each shot. I uprezzed the Panasonic crops using Bicubic Smoother in Photoshop to try to approximate how they might print. 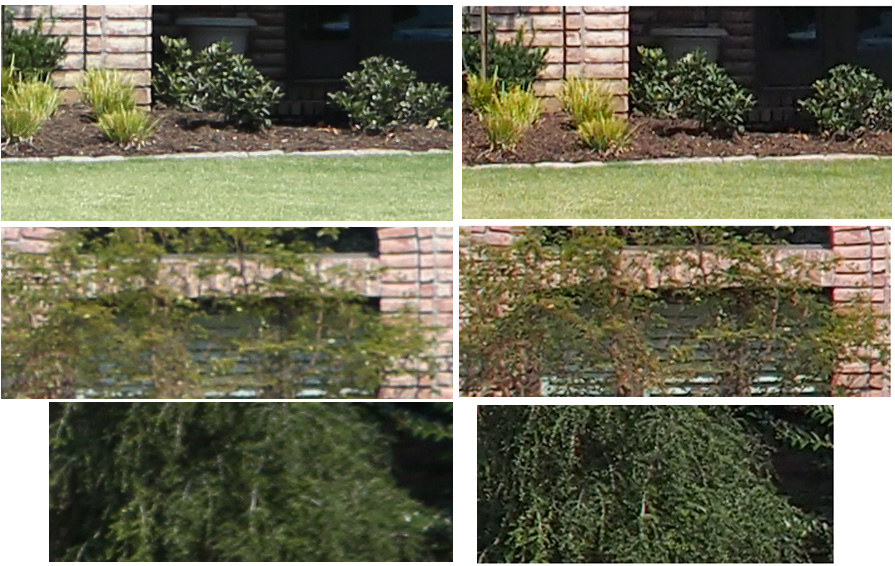 I think there’s clearly a difference in favor of the Panasonic / Olympus combination here. Now, before any Fanboys have a  stroke and spit their beer, the Canon lens used was optically tested 3 days ago. It’s perfectly fine and has no problems. The 24-70 wide-open, near its wide end and at distance is not going to have great edges and corners, that’s not its strength. And to make sure I hadn’t misfocused I did this in live view and then again with center AF. They were the same. This is about the worst-case scenario for the 24-70 lens, which is part of the reason I took a shot like this.

For the vast majority of shooting, especially at closer distances, the Canon often resolved more detail, and of course demonstrated its much narrower depth-of-field. In general, I found the Canon gave a bit more resolution in the center, especially at closer shooting distances. The edges, particularly at longer shooting distances, seemed to slightly favor the Panasonic. My point, though, wasn’t to say one was better than the other, but rather to see if they were roughly the same. My conclusion was that they were. 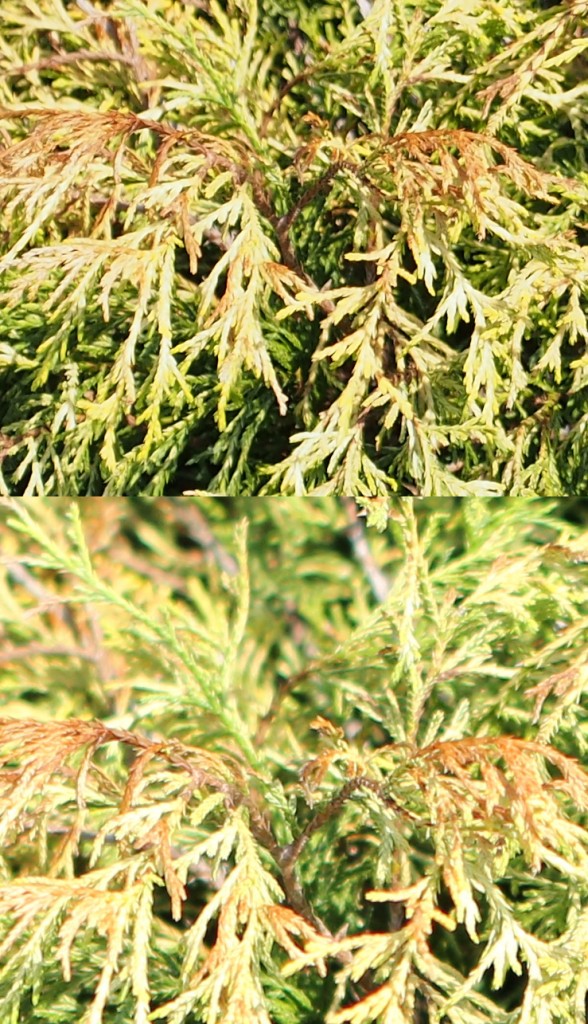 When I gave up comparing things and just took pictures with the Olympus – Panasonic 12-35 combination, though, I was totally pleased. It focuses close enough to function as a pseudomacro . . . 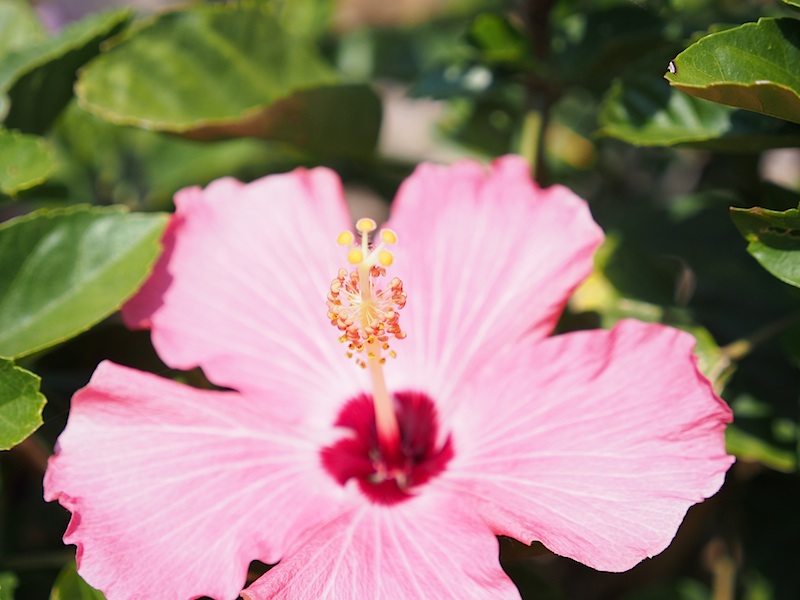 And once I adjusted to having an increased depth of field, I realized there were a lot of shots that were better because I didn’t have to stop down to get everything in focus. 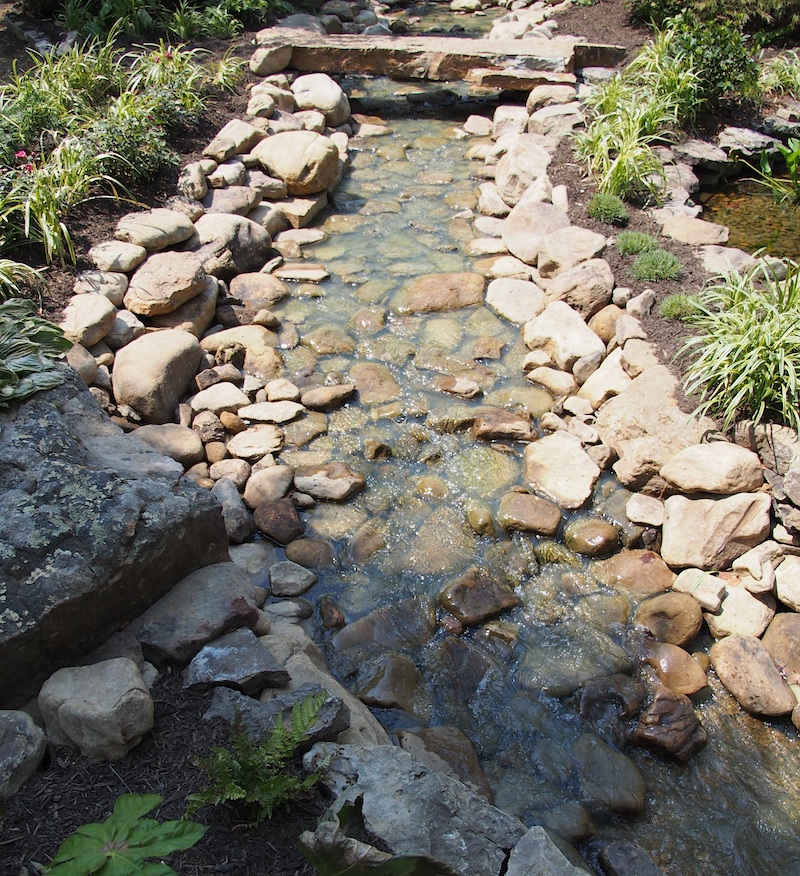 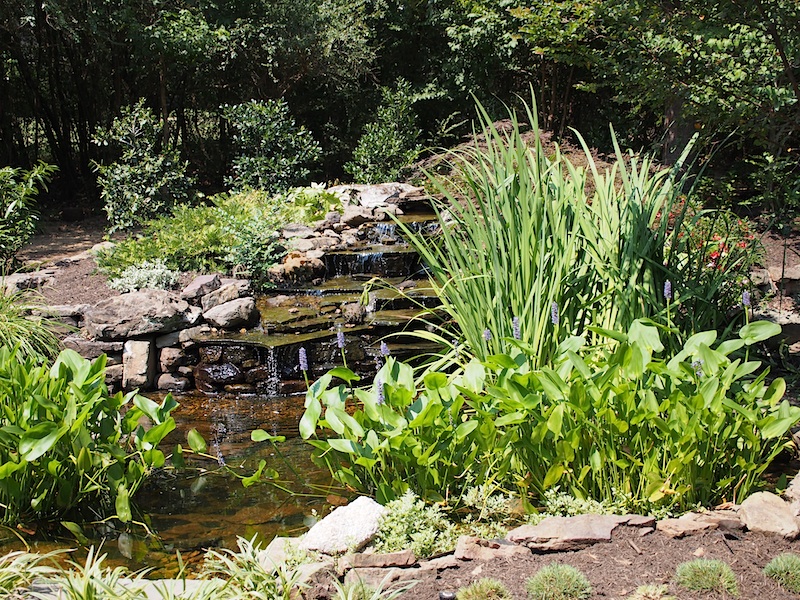 At the end of the day (and looking at another 50 or so shots) I would not say one lens is clearly better than the other. There were certainly some shots where the Canon seemed better in the center. There were some where the Panasonic seemed better in the edges and corners. Like the Imatest results, it was about what I’d expected. The Canon lens is an older design, being replaced as we speak, and was never known for its sharp edges and corners. Plus it’s covering a much larger full- frame sensor.

My expectations of the Panasonic 12-35 f/2.8, then, were met. It is an excellent, pro quality zoom. I won’t hesitate to take this combination anywhere and it will let me leave with just the camera and one lens when I just want a walkaround (compared to the several primes I have been taking). Distortion seemed limited to a tiny bit of pincushion at the long end, but there’s quite a bit of barrel at the shorter end. The flare, when it occurs, is pretty awful, but I didn’t see it unless the sun was actually in the shot.

Tweet
Posted in Lenses and Optics
The “Other” Canon Primes — Why Did They Do That?
Optically Adjusting a Lens