The “Other” Canon Primes — Why Did They Do That?

Canon actually released 3 prime lenses this month. The 40mm pancake has received a lot of attention, as it should. It’s an amazing little lens at an amazing price. Almost no one is commenting on the other two lenses, though. We got our first small batches of the Canon 24mm f/2.8 and Canon 28mm f/2.8 IS USMlenses in today and I was eager to see what all the fuss was not about.

As with all new lenses, I had to run them through Imatest to establish our acceptable standards for the lens. For those who don’t normally read this blog, let me make it clear: I’m not a lens reviewer. I don’t have the time or the inclination to do all of the work it takes to give you a good feel for how the lens handles, focuses, renders bokeh, etc. I simply test the lenses optically using our Imatest lab and share those results. I’m sure the professional reviewers will have complete results out soon.

These two lenses replace some rather old-in-the-tooth, but inexpensive, consumer grade prime lenses that sold for $350 (24mm) and $250 (28mm) respectively. Both were considered reasonable values and people liked their small size, but neither was a rock-my-world lens. The newer lenses are far more expensive at $850 (24mm IS) and $800 (28mm IS). They still are small, now have 7 curved aperture blades (rather than 5 in the old 28mm and 6 in the old 24mm), USM motors, and image stabilization. 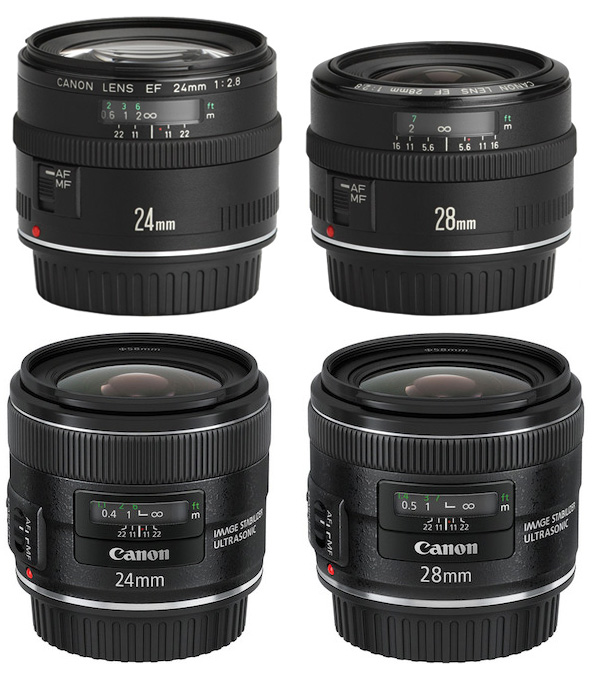 I had a different point of view going in with these lenses than I did with the Canon 40mm pancake. The 40mm was so inexpensive that good performance was a pleasant surprise. Pancakes are kind of cool. Buying a kind-of-cool, good-image-quality lens for $200 is a no brainer.

These two are not inexpensive. I understand they have IS and all, but at these prices for f/2.8 primes, I expect some really impressive resolution numbers. Obviously, some people have decided that f/2.8 is the new f/1.4. Call me old fashioned, but I disagree. At these prices, with an aperture no different than a high quality zoom, I expect some rocking good performance.

Build quality seems fine. It has a metal mount, and a nice rigid body with a pebbled finish. The aperture blades are nicely curved, making a near circular opening, which previous Canon consumer grade lenses often didn’t. AF is pretty quick, reasonably quiet, and quite accurate. The IS works very well, of course, and I could take fairly sharp images at 1/4 second exposures.

As always, these are Imatest MTF 50 results, so they reflect the performance at about 12 feet distance in our lab. Infinity and close-up results could be different to some degree. But the little 40mm has amazingly good numbers. To give some perspective, I’ve put it in a table with results for some other lenses in this range. The higher number is MTF 50 at the center point, the lower number is average across the entire lens front measured at 20 points. Results given are the average of 8 tested copies for each lens and the variation among copies was quite small.

There are a couple of points worth considering here. First, there’s nothing earth-shattering: the two new lenses are good. At this price they should be good. At least good. I was rather surprised at the difference between the two. The 24mm doesn’t resolve quite as well as the 28mm and the difference of about 50 Line pairs/Image height is right at the point where I expect you could detect the visual difference in a print. I was surprised that the old 28mm f/1.8 kept up so well when stopped down a bit. That lens has issues, don’t get me wrong (I swear it will flare by lamplight) but from a resolution standpoint, particularly in the center, it kept up surprisingly well.

Like most newly designed lenses, the strength of these new versions appears to be in the corners. You can tell by the average resolution numbers that the new lenses are doing better in the edges and corners than the older ones (I consider the Canon 24mm f/1.4 a new lens). One of the ways they accomplished that, though, appears to be by allowing more distortion (correcting distortion and maintaining sharpness are sometimes a trade-off in wide-angle lens design). The table below shows the amount of barrel distortion in several lenses.

It’s not awful. And, of course, it can be fixed in post processing. Again, the 24mm is a little worse than the 28mm.

As with the Canon 40mm f/2.8 tests, the results of both of theses lenses were VERY consistent with little copy-to-copy variation. We only had a dozen copies to test but there was  little lens-to-lens variation. This shows the actual numbers for 8 copies of each lens. 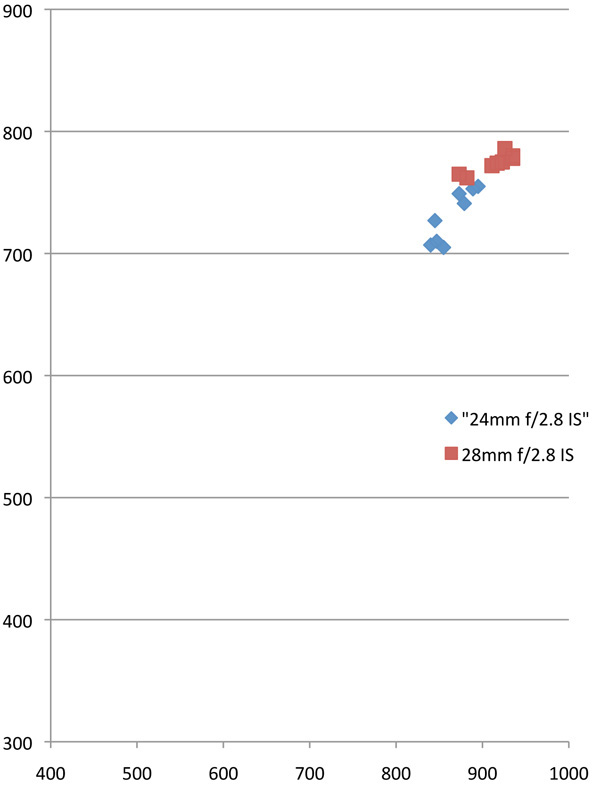 There is one other difference between the two lenses; their behavior when stopped down. The 24mm f/2.8 IS improves resolutions significantly when stopped down to f/4 and f/5.6 as shown below (the mark on the graphs are the average numbers for all 8 lenses tested). 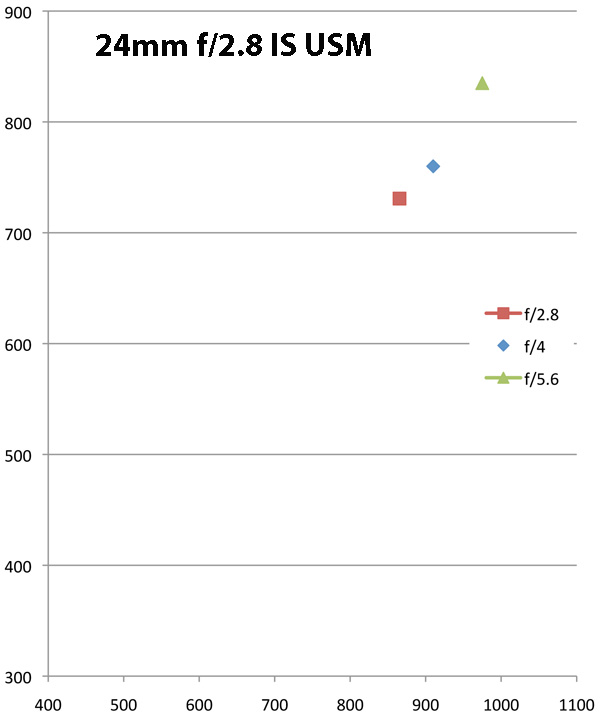 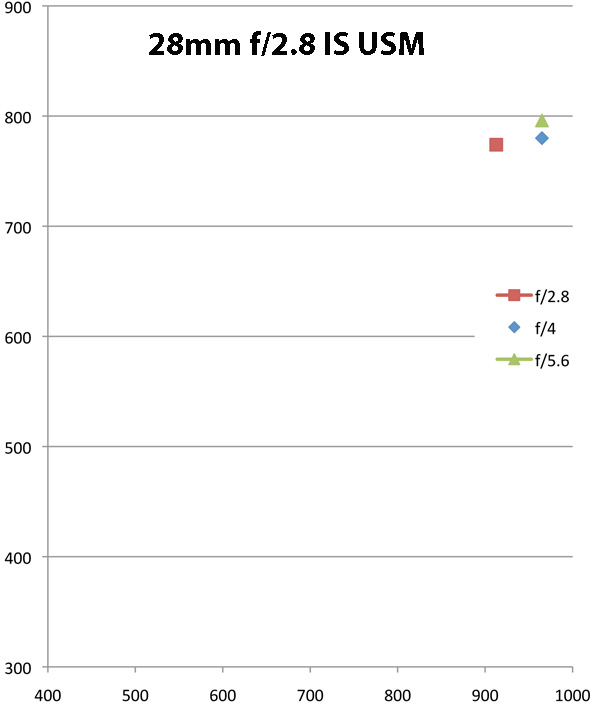 The bottom line is these are both nice, sharp lenses. Certainly sharper than the current 24-70 f/2.8 L zoom (we’ll have to see if they’re sharper than the 24-70 Mk II) and better than the 24mm and 28mm lenses that they – well, I guess replace. Although I have trouble considering a lens a replacement when the price has jumped 200% to 300%.

Would I buy one? No. I love IS on wide angle lenses, I really do. But I wouldn’t pay this price for it unless I had a specific need for it, which I don’t.I’m not even certain I know what the specific need might be. Concert or night-club photography, perhaps? Some video work where IS is critical? I’m not sure, maybe some of you can tell me. If you need this, though, I can say you should be quite happy with the image quality.

Personally, I’d rather have be half-way to saving up for a Canon 24mm f/1.4 or 2/3 of the way to a 35mm f/1.4. I’ll take the extra aperture over the IS. I’m sure not everyone will feel that way,though. Obviously Canon expects there will be a lot of people wanting these two new IS primes.

Tweet
Posted in New Items
Guest Blogger Aaron Nace | How to Capture the Real & Surreal with a Superlative Lens
A Weekend with the Panasonic 12-35 f/2.8