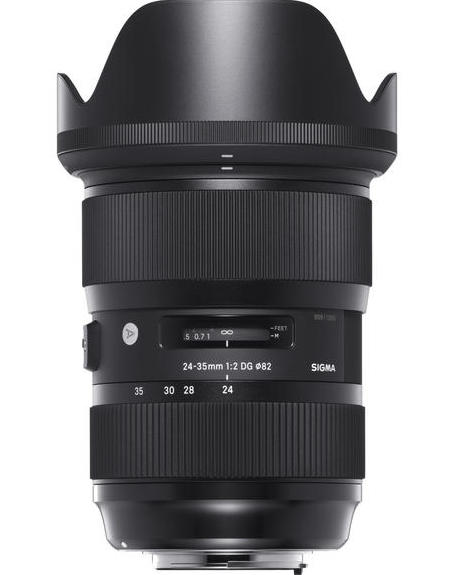 I generally do MTF testing on multiple copies of a given lens so that I can present the averages, look at sample variation, and stuff like that. I’m always aware that looking at any single copy of a lens, especially a zoom lens, gives only a limited prediction of how other copies might look. But sometimes a limited prediction is still pretty exciting. As luck would have it, I was able to get a single copy of the Sigma 24-35mm f/2.0 DG HSM Art lens for testing today. It will be a week before we have enough copies to begin doing out multiple copy tests, so I thought I’d go ahead and post the results of the one copy.

Sigma is releasing this lens as something a bit different in the standard zoom arena. The 24-35mm f/2 is, as you might have noticed, an f/2.0 ZOOM for full-frame sensors. Hot damn, I’m excited about that, and after seeing what the Sigma 18-35mm f/1.8 performs like on a crop-sensor camera I’m pretty excited to test the performance of Sigma’s new full-frame lens. The Sigma has 18 elements in 13 groups with one low dispersion and 7 ultra-low dispersion elements. It is a very short zoom range, roughly half that of a 24-70mm lens, but is a full stop faster. But it is being marketed more as an alternative to prime lenses in this range, rather than simply a competitor to 24-70 f/2.8 zoom lenses.

The Sigma zoom is pretty impressive, particularly in the center where it actually has better resolution than the Canon 24mm f/2.8 IS lens, despite the Sigma’s stop wider aperture. It’s clearly better than the Canon 24mm f/1.4, but of course the Canon is being tested a full stop wider than the Sigma zoom. Off axis, though, the Sigma doesn’t do quite so well, with a lot of astigmatism in the outer 2/3 of the field. Towards the edges both of the Canon primes are doing better than the Sigma. But still, that’s pretty impressive for a zoom. Primes are expected to be better in the outer 1/3 of the field.

To make a bit more practical comparison, we compared the Sigma at 24mm with the Canon 24mm f/1.4 lens, this time shot at f/2.0 so the apertures were equal. 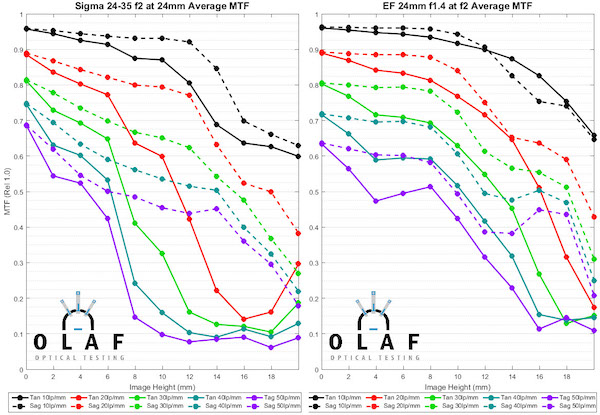 Stopped down to f/2.0, the Canon improves dramatically. It is now equal to the Sigma in the center and does better off center. But again, we’re comparing a $1,600 prime to a $1,000 zoom. The Sigma isn’t quite as good, but it’s certainly staying in the neighborhood, and that’s a pretty reasonable accomplishment, especially for a zoom lens.

The results are similar to those at 24mm. The Sigma is clearly better than the f/1.8 prime. Despite being a full stop of aperture faster, the Sigma zoom is nearly as good on-axis as the 28mm IS lens and not quite as good off-axis.

As at the other focal lengths, the Sigma is superb in the center, but has more astigmatism away from center. We can also directly compare the Sigma with the 35mm f/1.4 tested at f/2.0 to even up the apertures. 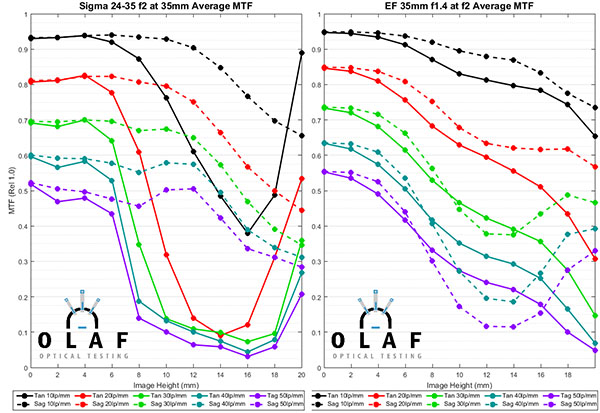 Again, stopped down to f/2.0, the Canon 35mm is a bit better than the Sigma zoom. Some of you are going to note the really interesting tangential curves on the Sigma lens at 35mm. We spent some time looking at this effect and it’s a wicked tangential field curvature. If we did our MTF tests (as some do) by refocusing at each measured spot, that would be much less impressive. We see a similar MTF with a number of wide-aperture prime lenses, although not quite this impressively.

I’ll put up one last image which just repeats the Sigma results at 24, 28, and 35mm since we know most zooms have a weaker and stronger end.

In the case of the Sigma 24-35mm f/2.0 Art lens, things aren’t too dramatic. Center resolution is a bit better at 24mm but that’s about it. The lens is very close to equal at all zoom distances.

Some people are going to be a bit disappointed (I admit I am a bit myself) because they really wanted a zoom that was every bit as good as their prime lenses. What we actually have is a zoom that’s as good at f/2.0 in the center as their prime lenses, but like almost every other zoom isn’t quite as good as a prime off-axis. When even the best optical engineers (and lately Sigma seems to have some of the best optical engineers) design a wide-aperture zoom lens, some compromises have to be made. In this case there’s a lot of astigmatism away from center. There’s good news for you who are disappointed now: Computer image analysis (like Imatest and DxO) don’t show astigmatism directly so this lens will probably look better with those test results than it does on the optical bench.

But the glass here is definitely way more than half full. We have, for the first time, a modern zoom lens that reaches f/2.0 aperture and is wickedly sharp. That’s an amazing thing all by itself and this is a unique optic. What is really amazing to me is that it sells for $1,000. That’s way less than either of the f/1.4 primes we tested against it, less than two of the f/2.8 primes, and less than an f/2.8 24-70mm zoom (granted that zoom does go all the way out to 70mm).

Will everybody be interested in this lens? Nope. A lot of prime shooters want f/1.4 as an option. A lot of zoom shooters are happy with f/2.8 and a greater zoom range. And being interested in the lens doesn’t mean buying the lens. We’ll have to see how it performs in the field.

My first thought is given the off axis astigmatism (which Brandon described in fairly poetic terms of 5th and 7th order aberrations that I didn’t follow well enough to try to translate for you) people are either going to love or hate the bokeh. That will be more important to a lot of people than the absolute resolution. So will autofocus performance, flare resistance, and a lot of things beside absolute resolution.

But whether you love the lens, hate the lens, or don’t care about the lens, I think we all should give Sigma a thank you for having the guts to create the lens. The bar has been changed. An f/2.8 zoom lens isn’t the fastest zoom anymore. And all of us can appreciate the ripple effects of a game changing lens that’s priced as aggressively as this one is.