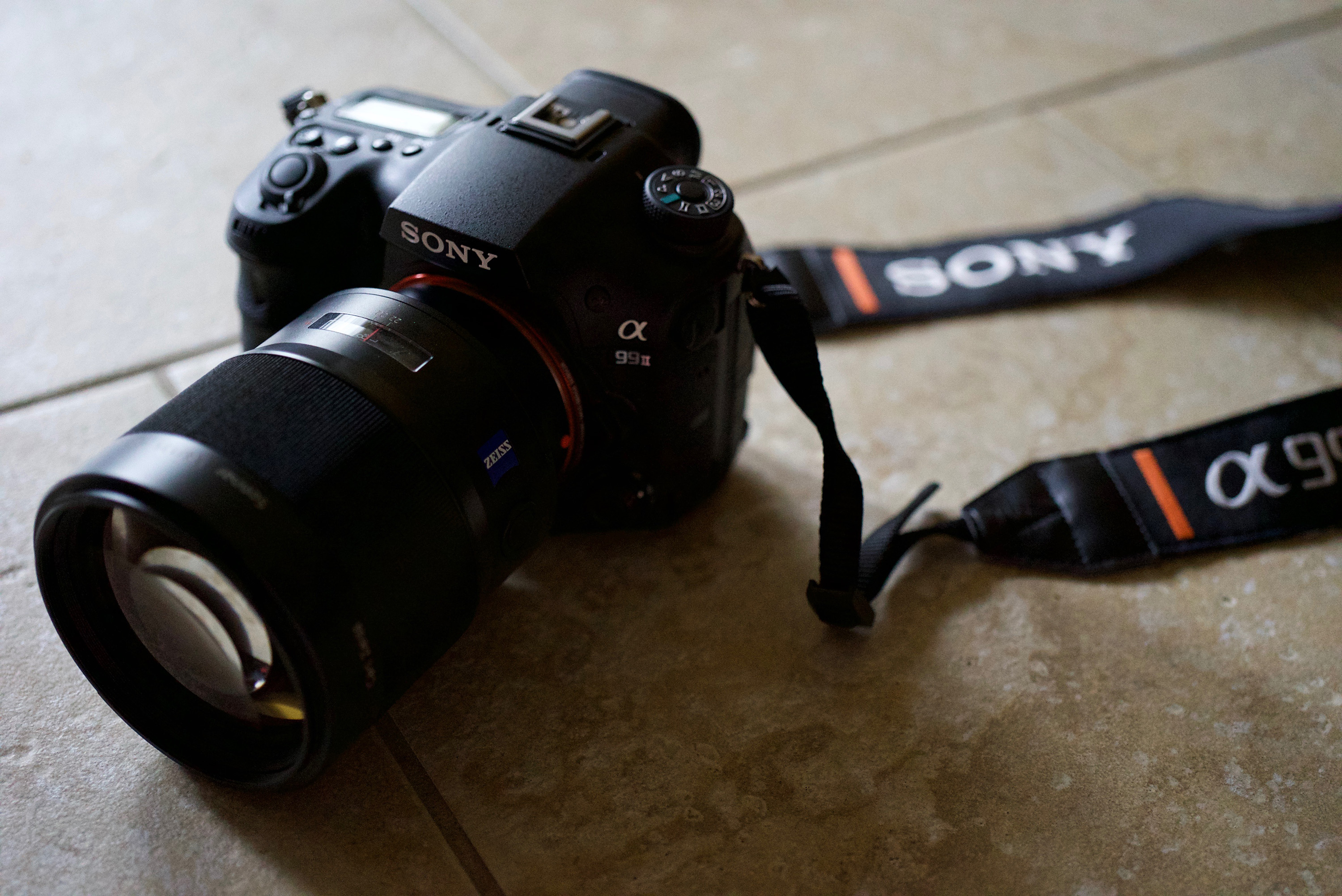 As a videographer, it’s easy to forget about Sony’s A-Mount. Still, I recognize that I owe a great deal of respect to the previous Minolta line. In its prime, Minolta developed several revolutionary functions that are often taken for granted today. Minolta’s Single Lens Reflex (SLR) technology was acquired by Sony in 2006, and the first releases under the new monicker were largely Minolta’s designs. Sony has since managed to develop the A-Mount into a unique line of cameras and lenses that are assumed by many, to inevitably flatline.

I have always been fascinated by, not only the engineering of photography and videography gear, but also the business models that supports the development of different products. While every camera manufacturer has its roots and fascinating history, there are few manufacturers whose journey into digital have been as excited or as confounding as Sony’s. Early in my career at Lensrentals, I adopted a philosophy founded solely on personal opinion, that Sony’s E-Mount standard cameras were mainly designed to be video-centric, while the A-Mount cameras were better designed for photography. At that time, Sony was frequently releasing lower-end video cameras with very high-end features, specifically an electronic viewfinder with an eye sensor in a Handycam and a full frame sensor camera with an E-Mount, despite the release of FE lenses still being a year away. At the time, Sony seemed to be at war with itself. The A-Mount cameras were built like photo cameras, but the lenses were the only Sony manufactured option for full frame sensors. In hindsight, these soft-launched trademarks allowed Sony to insidiously introduce features that would one day become benchmarks for their professional and semi-professional cameras while avoiding potentially unwanted attention from competitors. Sony wasn’t as conflicted as they seemed, rather, they were quietly developing a strategy that would allow them to converge the most usable functions for both photo and video into a compact camera, in a way the world had never experienced before. So maybe my theory about the E-Mount being for video and the A-Mount being for the photo industry was right for some period of time, or maybe Sony was merely cross-engineering features to allow themselves the ability to continue to offer new products. Whatever the reasoning behind it may be, the release of the Sony a99II late last year has completely refuted what I thought I knew about Sony’s camera lines. 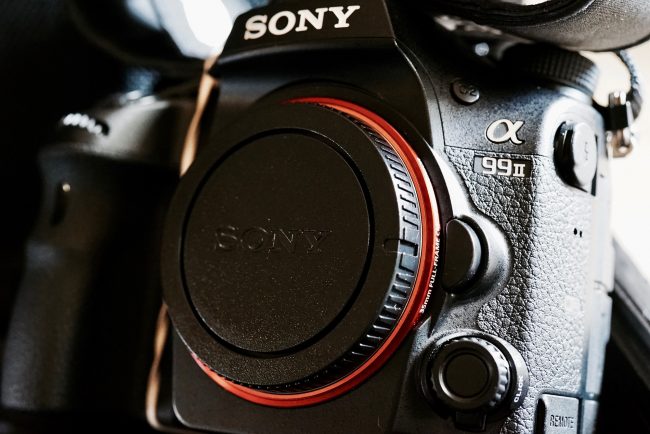 Lensrentals’ well-varied inventory allows their photo and video technicians access to an invaluable resource. As a Video Technician, it allows me to recognize design flaws or improvements and to evaluate field usability that goes beyond the specs. With so many products out there and so many applications, I look forward to tech support calls to provide fresh perspectives on some of the less obvious ways to use our gear. Likewise, I look forward to hearing about less obvious products to apply to current utilization. It was one such inquiry into the video potential of the Sony a99II that had me suddenly intrigued by Sony’s A-Mount system that I had long discredited as a being a system designed for video use.

I took the Sony a99II home, hoping to fall in love with it. While this highly versatile camera has some impressive qualities, I didn’t find myself falling head over heels. I wanted the girthier, DSLR-style body and improved dexterity of the LCD to qualify this camera as my new go-to for gimbal work. Unfortunately, I didn’t find myself spending any less time balancing the Sony a99II, and the LCD was partially obstructed by the gimbal despite its improved range of movement.

The a99II offers internal 4k up to 30 frames per second and is capable of shooting 120 frames per second at 1920X1080. 4k resolution can be achieved in both full frame and Super 35 formats, and unless the low light performance or expanded field of view are vital to your shoot, the cropped 4k image seemed to make better use of the bit depth. The oversampling with full pixel readout and zero pixels binning cut down on moire, compared to other professional DSLRs. Internally, you are shooting 4:2:0 8-bit which has led to some reports of banding issues at higher frame rates. I personally did not experience any issues with banding, but for the professional shooter who can’t afford any digital artifacting, a clean HDMI out supports 4:2:2 uncompressed capture. Aside from recording capabilities, Sony tossed in two gratuitous video specific features that were truly the source of my interest in the Sony a99II. For the first time, S-Log and timecode syncing for multiple cameras have been made available in Sony’s A-Mount lineup.

As someone who frequently shoots video on the Sony a7SII, one of my biggest complaints is the lack of lens availability. Full frame lenses are required to shoot at the highest resolution, and Sony has been pretty slow to roll out attractive optical options. Though they are now producing some industry standard focal lengths, they have yet to compete with Canon’s stellar lineup. Outside of native lenses, third party manufacturers don’t seem to be interested in redesigning their lenses to accommodate the reduced flange focal distance found in the E-Mount camera bodies. So far, Sigma’s MC-11 adapter is the only effort we’ve seen any major lens manufacturer make to adapt non-Sony lenses to the native E-Mount. The A-Mount, however, already has some compatible third party lenses and the wealth of optical options almost won me over.

The most noteworthy and heavily discussed improvement is the autofocus system. Despite it being the most advanced autofocus system we had seen Sony produce when the Sony a99II was announced, it has done little to compete with the likes of Canon, regarding market performance. The Canon 5D Mark IV’s touch screen focus capabilities seem like something out of Sony’s wheelhouse. Unfortunately, the Sony a99II has no touch screen option and a pretty lousy joystick to boot. Another drawback for video users is that your autofocus options are limited when shooting in video mode. Program Auto allows the user to take advantage of the autofocus but at the sacrifice of other image customization options. Fortunately, in Program Auto, you are still able to apply profiles, which are essentially glorified Instagram filters. It isn’t the ideal solution for a professional videographer, but at the very least it proves that Sony keeps video shooters in mind when designing new features.

I can see the appeal here for professional photographers though. For anyone shooting weddings or concerts stills who may also want some occasional video clips, I think the a99II is a reliable option. However, I don’t anticipate many videographers accepting the compromises found in the Sony a99II when the DSLR for video market is already highly saturated. After all of my tests and research, I am still confused by one design choice. Why pack all of these features into an A-Mount camera? 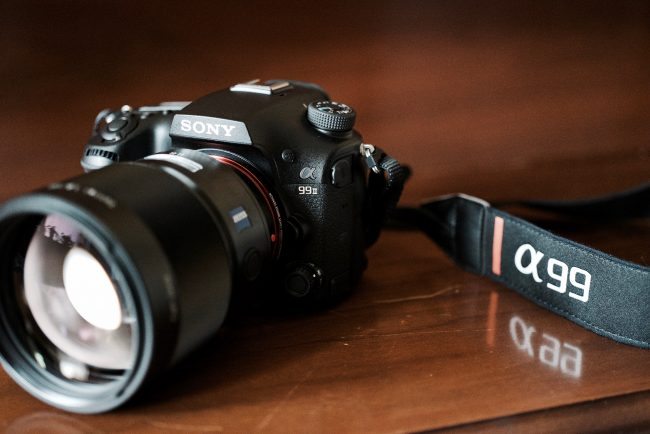 There has been a lot of speculation regarding the future of Sony’s A-Mount camera systems. The legacy mount served as Sony’s launchpad into the world of digital imaging but to date, has yet to garner the attention and profits of competitor’s DSLRs. Out of the nearly 30 camera models manufactured in the A-Mount standard, all but four have been discontinued at the time of this writing. In 2010, Sony released a record high of seven A-Mount camera models, geared toward shooters ranging from entry-level to midrange experience. That same year, Sony released its first E-Mount camcorder. The number of A-Mount cameras in production has been dwindling ever since. In fact, since the premiere of the a7 line, Sony has only offered one new A-Mount camera model release a year, with the Sony a99II being only the second A-Mount camera geared toward professional use since 2012. So why has this SLR pioneer mounting system failed to gain popularity in the U.S. market and why does Sony continue to engineer new products for it?

Let’s start with popularity: Maybe it was Minolta’s $126 million loss to Honeywell over a patent lawsuit, maybe it was poorly planned product execution when the culture of shooting started rapidly changing at the turn of the millennium. On paper, Minolta’s accomplishments read like those of an innovative heavy hitter. Unfortunately, while Minolta focused on engineering features like anti-shake, the sensor-based two-axis image stabilization, multi-mode SLRs, and early in-camera autofocus motors, it failed to maintain timely releases of products suited for the professional market. Nikon and Canon recognized the opportunity outside of film and were steadfast in taking advantage of the quickly-evolving digital market. Professionals preferring the less expensive and more accessible digital medium quickly became Nikon or Canon devotees. Even with Minolta’s breakthroughs, their failure to cater to the new demographic was a blow they couldn’t afford. In 2003, Minolta merged with Konica and by 2006, the company announced its plans to sell its camera division to focus their efforts and resources on the numerous other technology divisions under the Konica Minolta umbrella.

That leads us to the next question: With E-Mount’s success, why hasn’t Sony given up on the A-Mount despite its austerity laden history? The answer is easy. Sony paid for the technology when they took over Konica Minolta’s camera division. Sony took on a team of Minolta’s engineers and has been establishing their brand in the digital market ever since. As recent as 2016, Sony was forecasting growth in the popularity of the A-Mount and is currently the number two manufacturer of interchangeable lens cameras in the U. S. market. While Sony may be limiting batch sizes of A-Mount cameras, the opportunity to engineer sensor technology in different mounts allows them a unique technical bench to work from and is a distinctly Sony pursuit. So, is the A-Mount dead? Not yet.