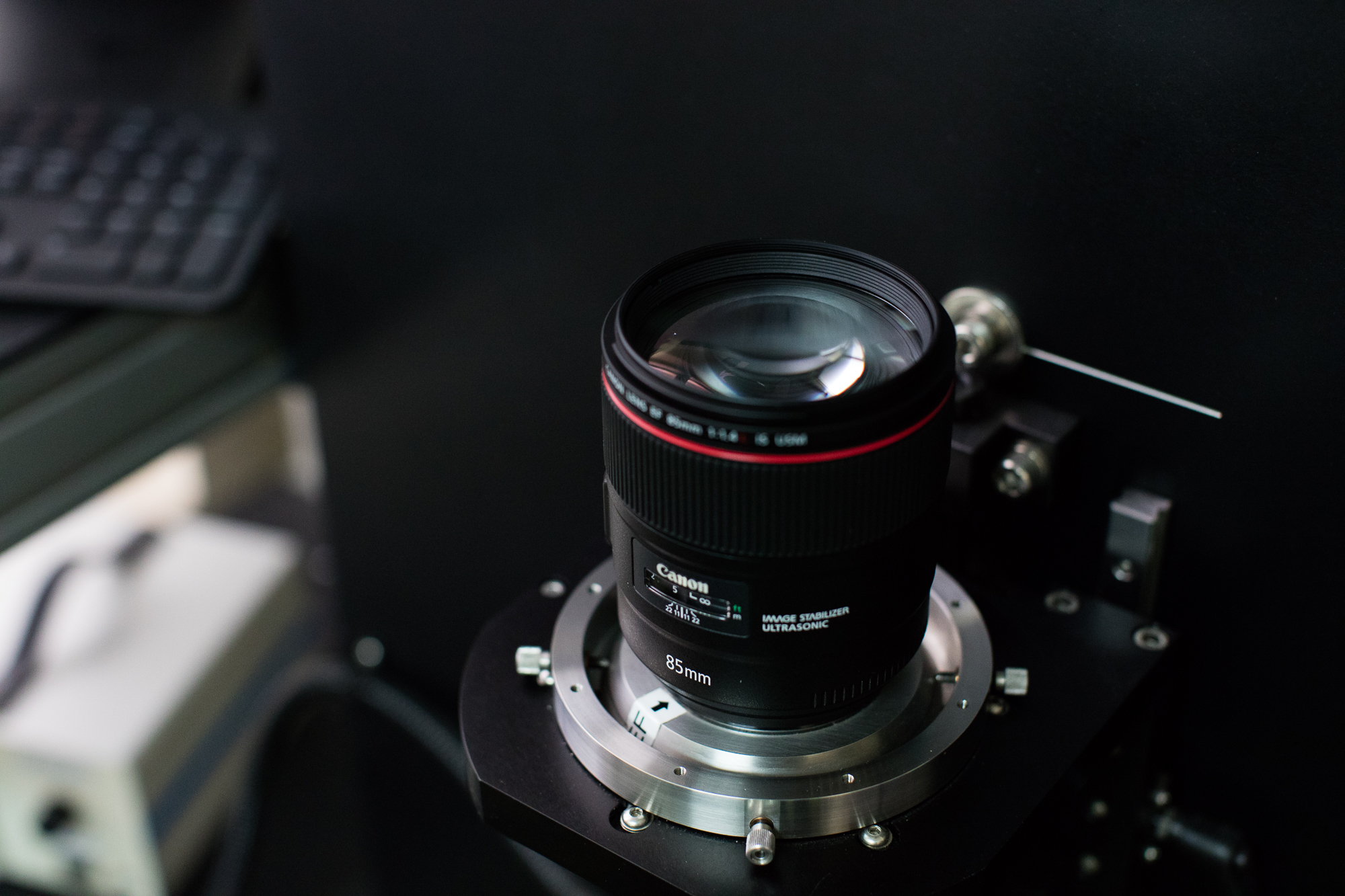 The King is Not Dead

The Canon 85mm f/1.2 II lens, the king of creamy bokeh, is basically a 40-year old optical design first released in 1976 (in FD mount) and released as an EF mount lens after some slight optical modification in 1989. The “II” version, released in 2006, was an electrical/mechanical change only, the optics remained the same. That’s an amazing run for a photography lens. It was designed in the early 1970’s and is still used frequently today.

But even those of us who love the lens (and I’m one of them) admit it has shortcomings and isn’t a great ‘everyday’ 85mm prime. Autofocus is slow enough to limit its use in many situations. Even stopped down, it’s not a sharp lens by today’s standards. It’s a rather heavy lens (as we say, there’s not much air in there). And because of its design (the internal optics and mechanics are a single part), most repairs are breathtakingly expensive ($1,100 is the norm for anything other than a front or rear element scratch). 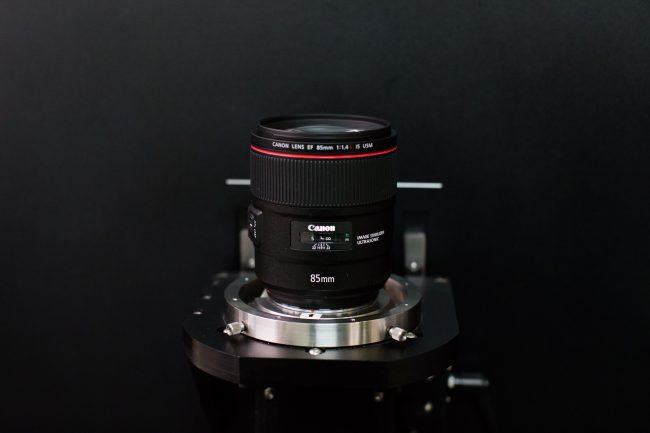 So we have, many of us, waited not-all-that-damn patiently for Canon to release a modern, fast-focusing 85mm L lens. Many wanted an updated f/1.2. Others just wanted the sharpest 85mm lens on the planet. At least a significant minority wanted it to have Image Stabilization. And they wanted it to be about the same size as the Canon 85mm f1.8.

I usually tell you what I’m going to tell you first, so you don’t have to read the whole article if you don’t want to. In the case of this lens, I wish I was one of those click-bait headline review sites that gave each lens a number grade. Depending on how I valued the various categories of assessment I could just as easily say ‘this lens rated 89.534; our highest score ever‘ or ‘this lens rated 56.497 and is a huge disappointment‘. I suspect you’ll find that kind of extreme commentary on various internet sites.

So what do I really think? The Canon 85mm f/1.4 L IS is going to disappoint the Fanboys wanting bragging rights for the absolute best resolution in an 85mm lens. But after all the dust settles, it’s going to be an immensely popular lens because it’s very good optically and just superbly usable.

It may not give you the creamiest or sharpest image possible, but it will get reasonably high marks for both. It nails autofocus quickly and easily and the IS works superbly well. Basically, if you have enough light to see it, you’ll be able to photograph it. It’s reasonably sized and easy to handle.

If you shoot 85mm with wide aperture primes frequently and outside the studio, and want a high ‘keeper rate’, you’ll want this lens. If 85mm is a specialty lens for you, then you might prefer a different lens that emphasizes that special feature you’re looking for.

So, What About the Optics

We did our usual 4-rotation MTF (Modulation Transfer Function) tests on ten copies of the lens. The MTF was good, but not outstandingly good at f/1.4. It maintains excellent sharpness away from the center, but shows some astigmatism-like separation of the sagittal and tangential lines in the outer 1/4 of the image. 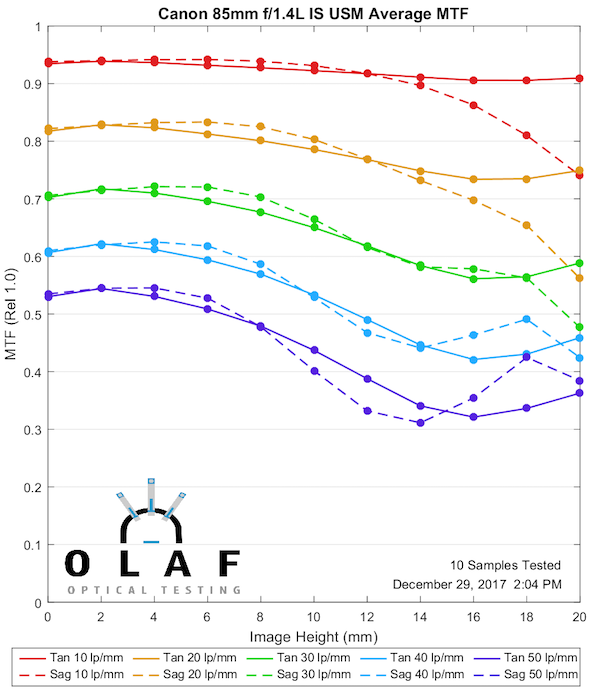 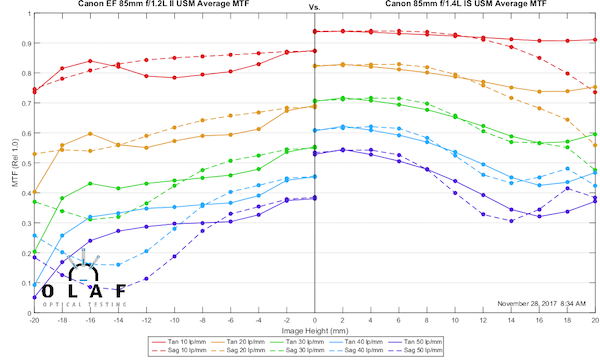 The new Canon is not as good as the current resolution champion Sigma 85mm f/1.4 Art lens, either in center or off-center resolution. 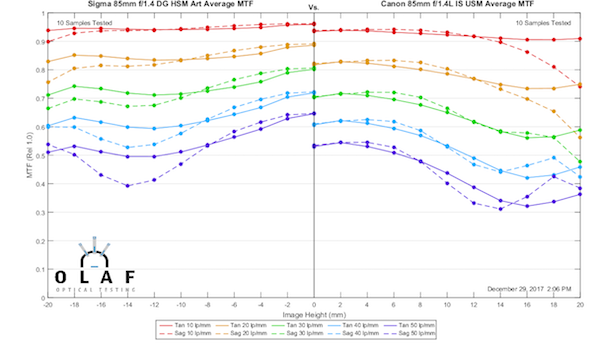 But the Canon is quite good. It more than holds its own in comparison with the Sony FE 85mm f/1.4 GM or Nikon 85mm f/1.4 G lenses, both of which are considered excellent. 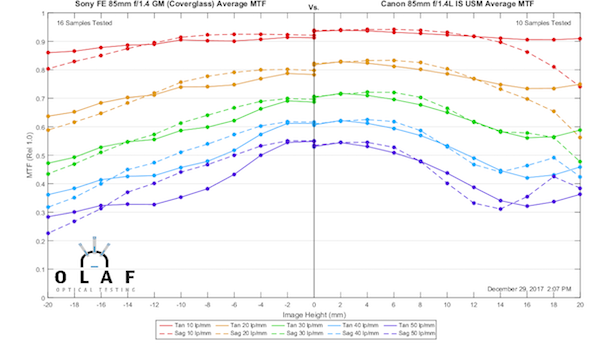 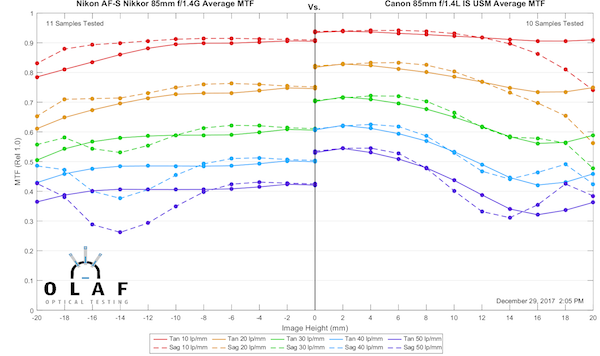 People always ask for these, although I have no idea why. If you don’t need a f/1.4 aperture why are you considering spending way more money on a f/1.4 lens? But the graphs below compare the Canon f/1.4L IS  at f/1.4 to the f/1.8 lenses. 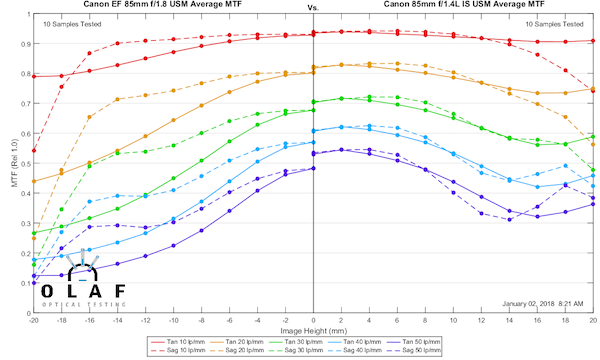 The Tamron VC, which is a very nice lens, is about the same at f/1.8 as the Canon is at f/1.4. And OK, I do admit I understand why this comparison; a low-light shooter might be choosing for image stabilization over everything else. But again, if you don’t need f/1.4 . . . . . 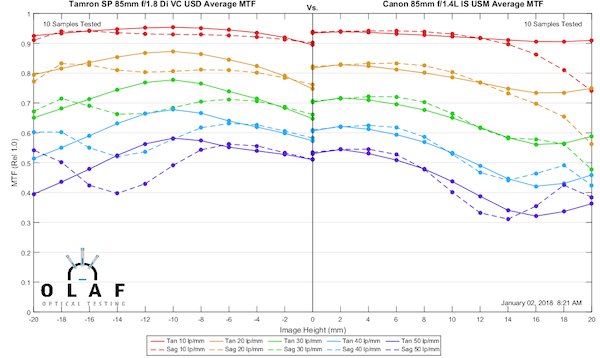 The field curvature plots tell us a lot about the lens. In the upper left corner is the ‘average’ field and you’ll notice it’s pretty flat, so you can keep everything in focus from one side to the other. But if you look at the separate sagittal and tangential fields (lower two plots) you’ll notice they are both slightly curved; the sagittal in a shallow ‘M’ shape, the tangential in an even more shallow ‘W’. 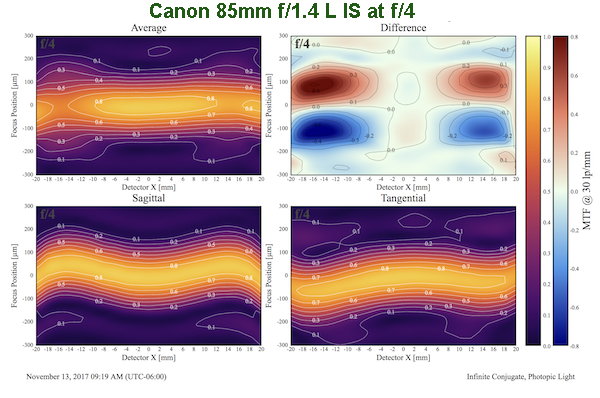 If you look back at the purple areas in the ‘average’ graph, now you notice that it’s slightly dumbbell-shaped. That’s because off-axis the difference between the ‘M’ and ‘W’ is an area of astigmatism that won’t go away. You can try as you like, but you’re not going to get rid of the astigmatism in that area.

The ‘difference’ graph in the upper right shows you two significant areas where astigmatism is fairly noticeable (the red and blue patches). Bokeh in these areas is going to be a little misshapen or busy. Notice they are just barely out of focus (the “0” on the Y-axis). Further out of focus everything gets blurry and smooth. So the takeaway is to make sure your out-of-focus highlights are well out of focus, not just barely out of focus. OK, the real takeaway is the bokeh-masters online will enjoy hours of arguing about whether the bokeh is great or awful. It will depend on the shot.

As an aside, if you wonder about the new color scheme for the field curvature graphs, it’s supposed to be just as visible to color-blind persons as those with full-color vision, so we thought we’d switch over to it. OK, you’re right, mostly I think it looks cooler. 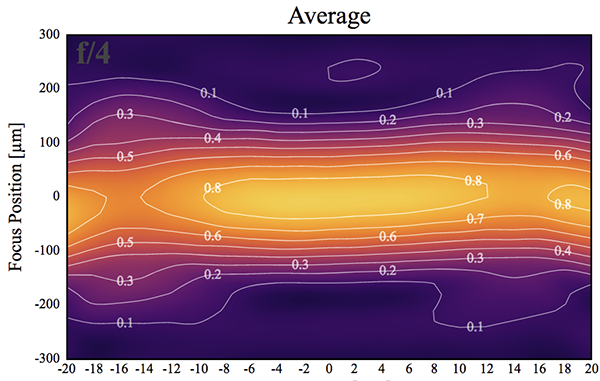 Because of the off-axis astigmatism, best average focus point doesn’t make much difference either. The best sagittal focus (orange line) bulges forward, while the best tangential focus position (green line) heads the opposite way. The best average focus is right in the middle, again about the same as best center focus. 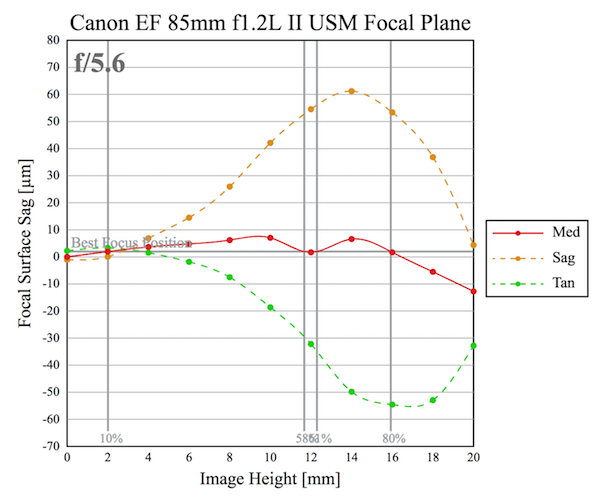 So our fancy program is useless, but that’s a good thing; it makes shooting in the field easy. Best center focus is best individual focus is best overall focus. Not many lenses are designed that way.

As to performance, you have near-center sharpness to about 6mm from center (1/3 of the way to the edge). For the middle 1/3 of the image, sharpness remains excellent although it does drop off slightly at higher frequencies (fine detail). In the outer 1/3, there is going to be some astigmatism and it won’t change no matter how you adjust focus.

The sum total of all of this is that the Canon 85mm f/1.4 L IS is very easy to use accurately. You don’t have to worry about field curvature at all and wherever you focus you’ll get good sharpness across the field. Whether this contributes to the very accurate autofocus many people have observed with using this lens, I don’t know, but it can’t hurt.

We’re going to start showing stop-down MTFs on all lenses going forward. These aren’t done on all 10 lenses, we just pick an average copy and run stop-down MTFs on that one, so you may notice some minor irregularities that our averaged MTFs don’t show.

First let’s compare the two Canon 85mm L lenses at f/2.8, which is where the f/1.2 (on the left) starts to get sharp. The new lens, as you would expect, is still sharper both on and off axis. 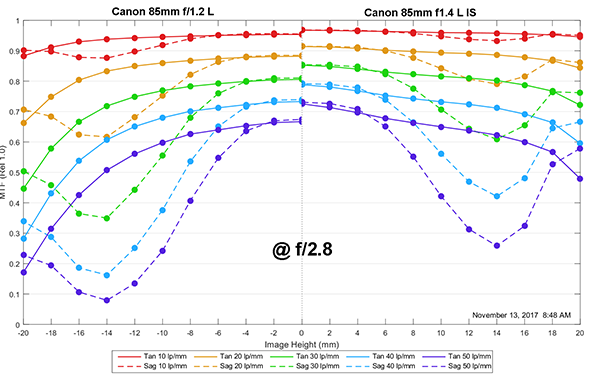 Next, we’ll stop the 85mm f/1.4 L IS lens down to f/5.6 and compare it to f/2.8. As an aside, you may notice I flipped focus from tangential to sagittal on this one, trying to do a couple of experiments at once, but it illustrates what I mentioned above about astigmatism. The takeaway message is that by f/2.8 this lens is near maximum sharpness and maintains it at least to f/5.6. 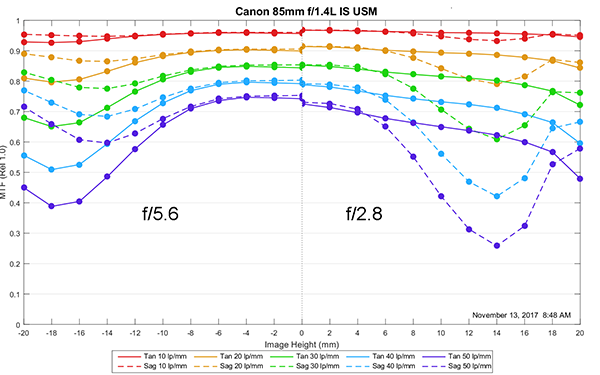 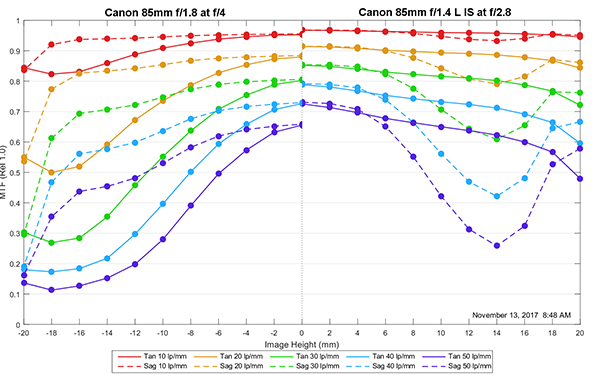 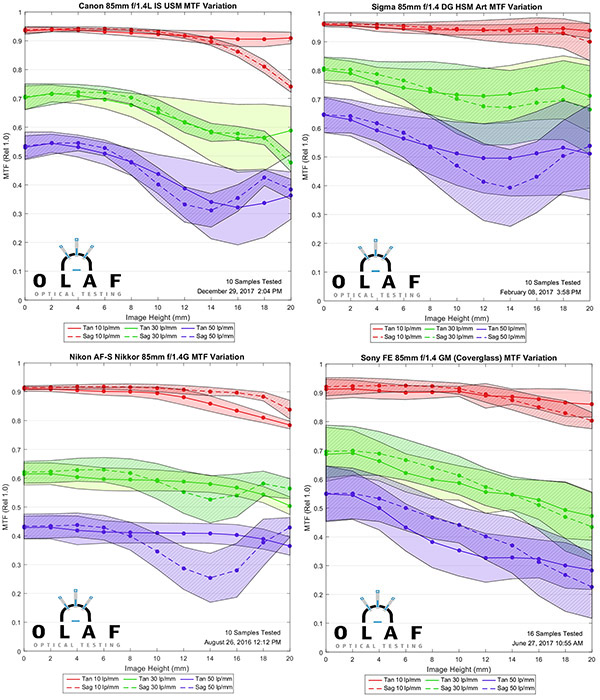 While we still don’t feel our variance number is the end-all measurement, it’s the best thing we have right now. For what it’s worth, we consider good primes to have variance numbers of 40 or less.

To give you a bit more intuitive look at how much of a difference that is, we’ll compare full-frame display resolution thumbnails of 9 copies of the Canon 85mm f/1.4 IS with 9 copies of the Sony FE 85mm f/1.4 GM. This is a really consistent performance from the Canon. 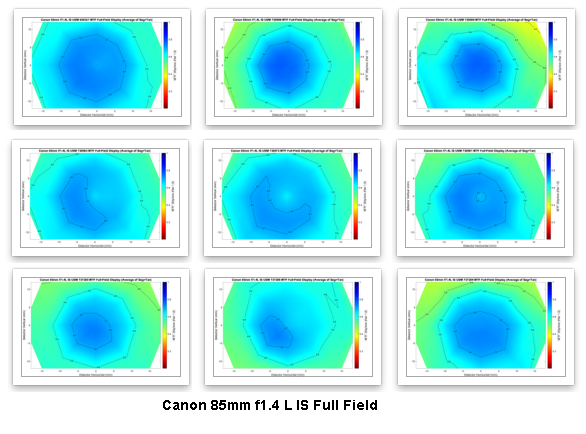 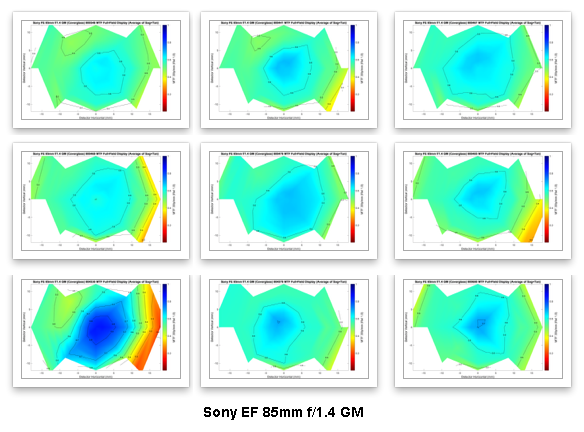 This is a lens where the designer has focused on being very good in as many situations as possible rather than obtaining the highest possible MTF. It’s apparently designed for the person who uses 85mm in a lot of different situations; especially in low light situations.

It’s very sharp, the field is designed to get good focus no matter where you focus, and all reports indicate that the focusing is quick and accurate. If you take a ton of shots, your keeper rate is going to be exceptionally high. And if you shoot in poor lighting with an 85mm it will be amazing compared to almost anything else available in Canon mount.

As I said earlier, if you have a specialty use for an 85mm prime, you may want something else. The Sigma Art and Zeiss Otus have slightly higher resolution. The Tamron 85mm f/1.8 VC is a good choice if you primarily want image stabilization and don’t need f/1.4. The Canon f/1.2 still is a unique optic with a look that’s quite different.

This lens does everything well and one thing (low light) exceptionally well. It’s the decathlete of 85mm lenses.

Addendum: I’ve been asked twice if the Sigma is still sharper than the Canon at f/5.6 and the answer is insignificantly, if at all. They’re almost identical at f/5.6. 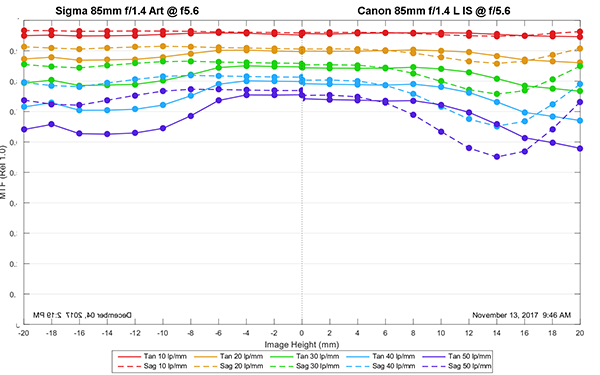 Addendum II: There is a really good article Canon put out about the background of designing this lens HERE. Be sure to read Part II.