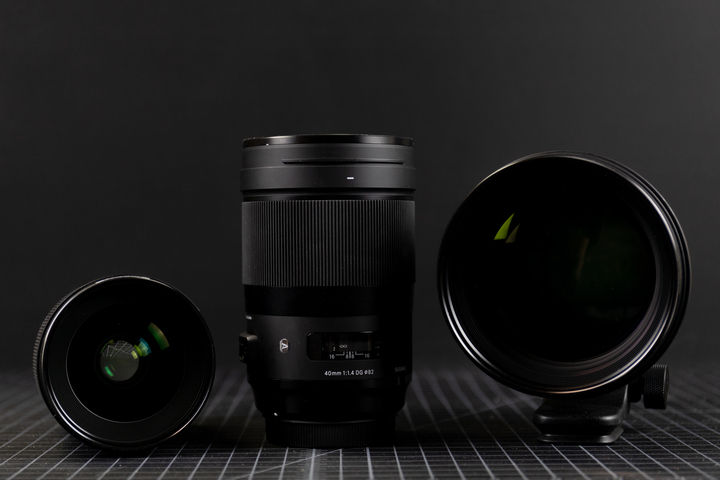 A number of people have noticed I haven’t been publishing MTF results for new lenses lately. There’s a lot of reasons for that, but all primarily come down to I’m doing too much other stuff. For a year, my priority has been improving our in-house testing methods; developing the Rapid MTF tests has taken several thousand hours (not all mine, but it seems that way sometimes). Introduction of new mounts (R, Z, SL) each means making modifications to our test bench, etc. etc.

There were also discussions with some other websites to host our data and make it more obtainable and organized. Those faded out, but for a while, I was hoping things would get automated, and I wouldn’t have to write these posts anymore. (And I’m the guy who coined the term HINAP: Hope Is Not A Plan. So yet again, my hope was a downpayment on inevitable disappointment.)

We still run the tests; I just haven’t had the time to do the write-ups. I’m going to try to get those out reasonably quickly by grouping them. Today we’ll post the several Sigma Art lenses that have been released and tested over the last few months.

My Expectations are Simple

I make no efforts to hide the fact that I love Sigma’s attitude; it’s refreshing. Every lens made by anyone balances three things: price, size, and image quality. Sigma has made their attitude clear; size can be damned; we’re going to make reasonably priced lenses with amazing image quality. If they’re huge, they’re huge. That’s what I expect from all the Art primes.

In these days when most manufacturers have replaced their marketing department with a Poet Laureate blowing more smoke than a California wildfire, Sigma goes with the three-step ‘how to build confidence’ model of marketing:

Today I’m going to show you if they’ve done it.  We’ll look at three newer Sigma Art Models: the 28mm f1.4 DG HSM Art; 40mm f/1.4 DG HSM, and 105mm f/1.4 DG HSM Art lenses. I’m going to keep it relatively quick and straightforward: MTF charts, and a couple of comparisons for each lens. I’m not going to show variance graphs; people abuse them, and the variance for all of these was very low.

It is good. It is very, very good. I particularly draw your attention to the purple line (50 lp/mm) which correlates with fine detail on a high-resolution camera. We like for that to be over 0.5, and the Sigma is 0.7. That is truly exceptional, and the lens maintains sharpness well to the edge of the image with little astigmatism. 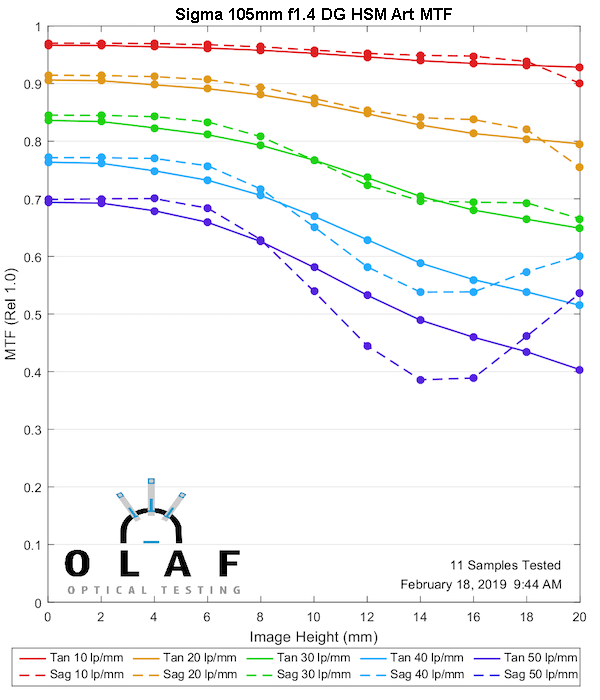 The obvious comparison is to the Nikon 105mm f/1.4, and the Sigma looks just spectacular here. 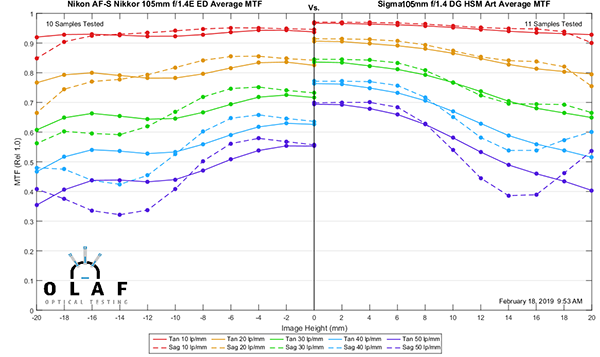 The Zeiss 100mm f/2 Makro-Planar should be an unfair comparison; the Zeiss is being tested at f/2 which should give it a big advantage. Sigma doesn’t care, though; from a resolution standpoint, it’s clearly superior at f/1.4 to the Zeiss at f/2. 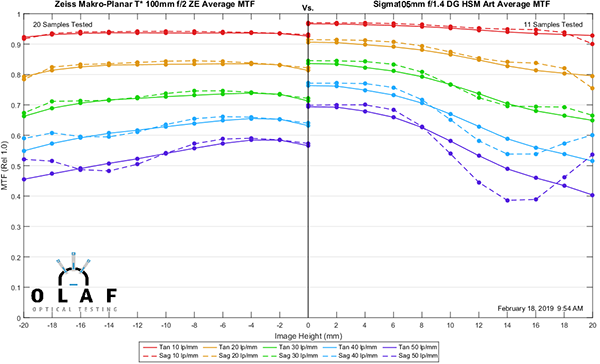 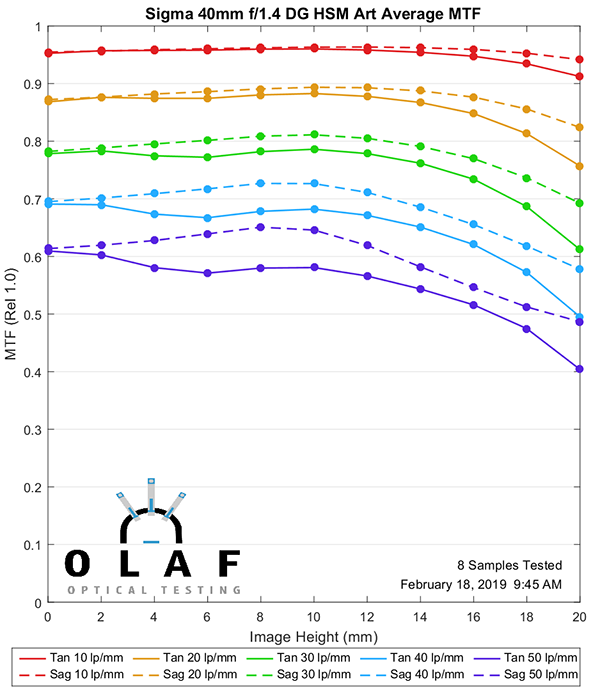 Of course, the MTF is not quite as impressive as the 105mm, because telephoto lenses are generally sharper than mid-range lenses. So let’s compare it to some similar focal lengths. My first comparison isn’t really fair; the Tamron 45mm f1.8 Di VC is one of my favorite bargain lenses, costing about 1/3 of what the Art does. The Tamron is an excellent lens, and I put this comparison up just to show how excellent the Sigma is. 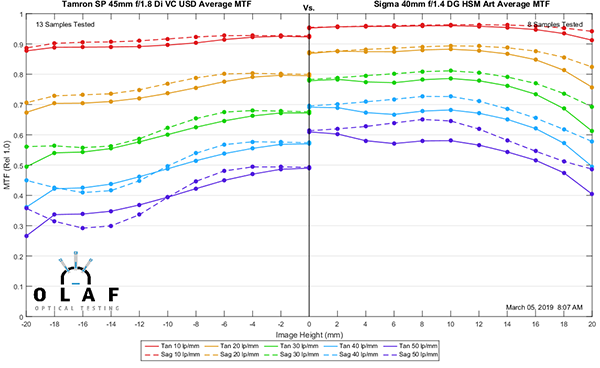 Let’s move over to something more in the same financial class. I think comparisons to the Sigma 35mm and 50mm f/1.4 Art lenses are appropriate; unless you need to collect the whole set, a lot of people will be picking one from among these. 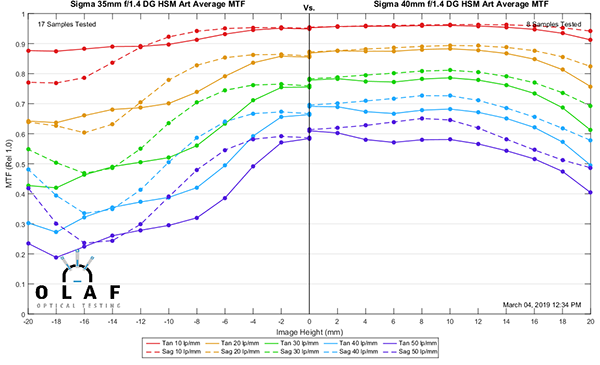 We’ll do the other side of the bracket now, comparing the 40mm to the Sigma 50mm f1.4 Art. 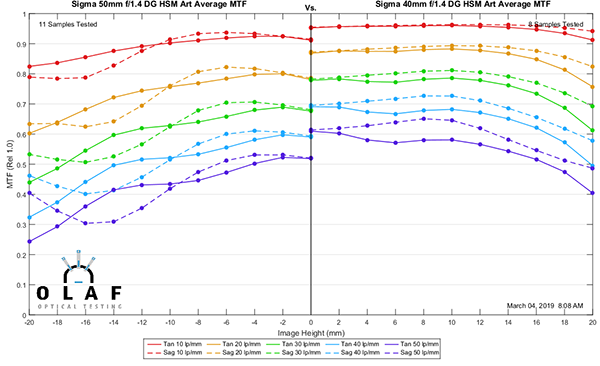 OK, let’s see if the Sigma can punch out of its price class. Here’s the Sigma 40mm compared to the much pricier and equally heavy Zeiss 55mm Otus, just for fun. Color me impressed. 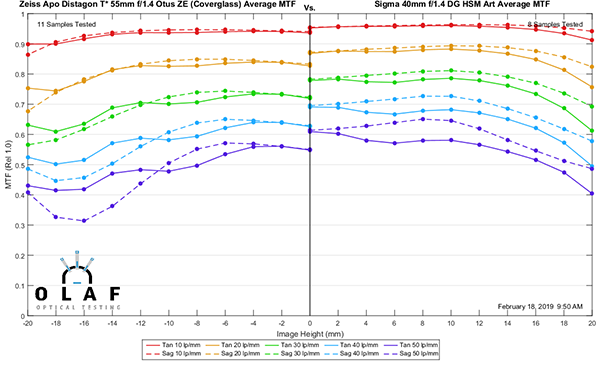 The 28mm f/1.4 slides neatly into the slot between the 24mm and 35mm Art lenses. (You didn’t know that was a slot? Cinematographers do, and that’s probably some of the reason Sigma made these lenses.) Like the other two, the MTF is excellent. The other nice thing is the 28mm is a LOT smaller and lighter than the others. So, can Sigma do sharp without huge? Yes. Yes, they can. 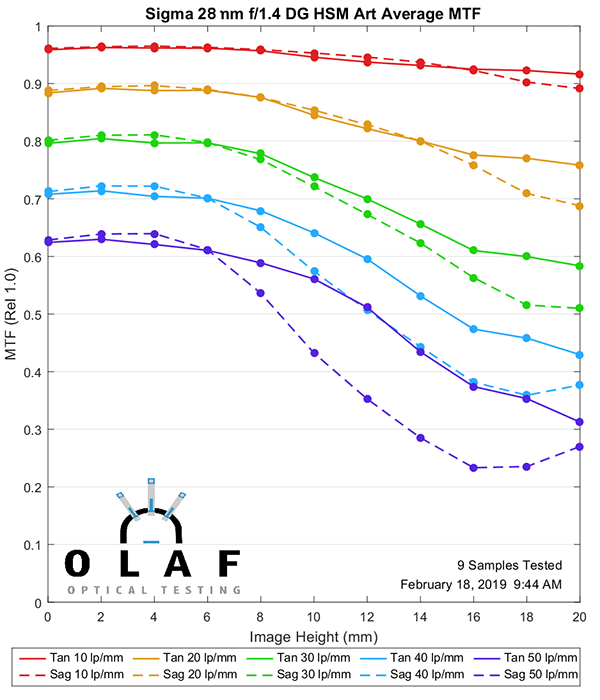 You can scroll up a bit and see that the 28mm Art definitely has a better MTF than the 35mm Art. Let’s compare it to the 24mm side-by-side. The 24mm is not the best of the Art primes, and the difference between it and the new 28mm is dramatic. 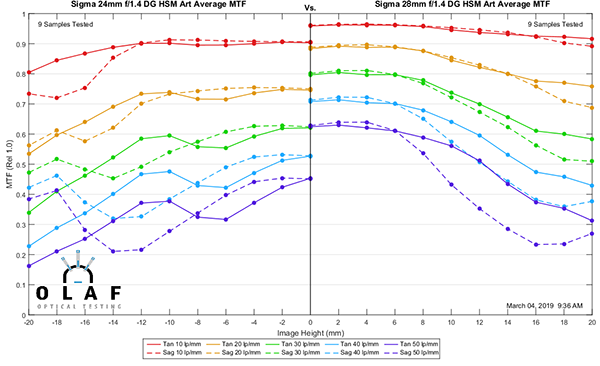 Let’s go straight to the mountaintop, and compare the Zeiss Otus 28mm f1.4 to the new Sigma. This comparison surprised even me. The Sigma is sharper in the center, although things even up away from the center. But you could buy all three of the latest Sigma’s for the price of the Otus 28mm. 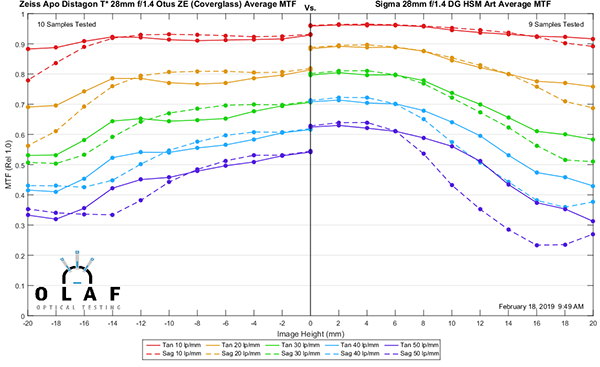 First, a reminder: this has been an MTF test. It is only an MTF test. Had this been an actual lens review I’d have talked about other stuff, but it’s not, and I don’t. I test lenses, and I tell you about the test results. If you’re into bourgeois concepts, like sharpness, then these are certainly worth further investigation. You have to decide if it ‘takes your creativity to a new level’ or whatever.

But as far as MTF tests go, Sigma Art lenses set the bar high back when the first ones were released. These new ones have raised the bar even higher. I shouldn’t be surprised; Sigma did exactly what they said they would do.

I think one of the major reasons for the new releases was to give more focal length selection for videography. The fact that we could get video versions of these as soon as (and in one case before) the photo lenses were released tends to support that.

But if you are considering adding an Art Prime to your photo collection, from a resolution standpoint, I’d take a very serious look at these three.  Yep, they are big and heavy. Nope, no image stabilization. But damn, they outresolve just about anything else you can buy.