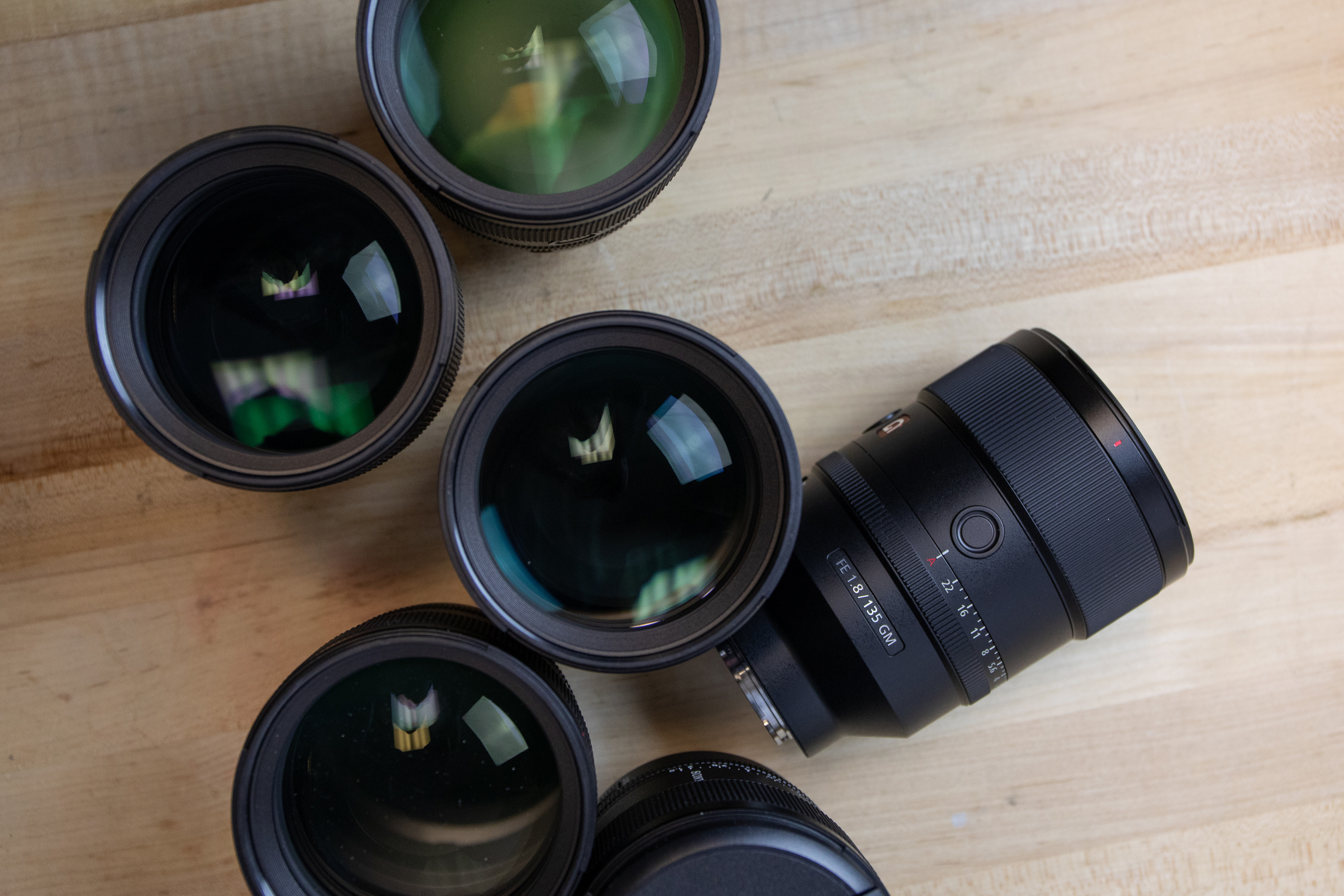 As is sometimes the case, I got access to a couple of pre-release copies of the new Sony FE 135mm f1.8 GM lens. Of course, if I get access, it gets MTF bench tested. I mounted the first one, sipped my coffee and then lost my mind and started shouting various expletives, enough to bring Aaron running in from the other room to see what I’d broken.

I hadn’t broken anything; I just saw MTF curves higher than anything I’d ever seen in a normal-range lens. (Lenses like 400mm f/2.8 super telephotos, are about this high. But those are super telephotos. And f/2.8.)

Anyway, I tested the two copies we had and sent a subtle note of congratulations to some friends at Sony. The note turned into a video conference with one of the designers of the lens and some phone calls that went like “you can write up those two copies” and “no, I only write up 10-copy sets”. This turned into Sony giving me to access to 8 more copies and permission release the test results early. 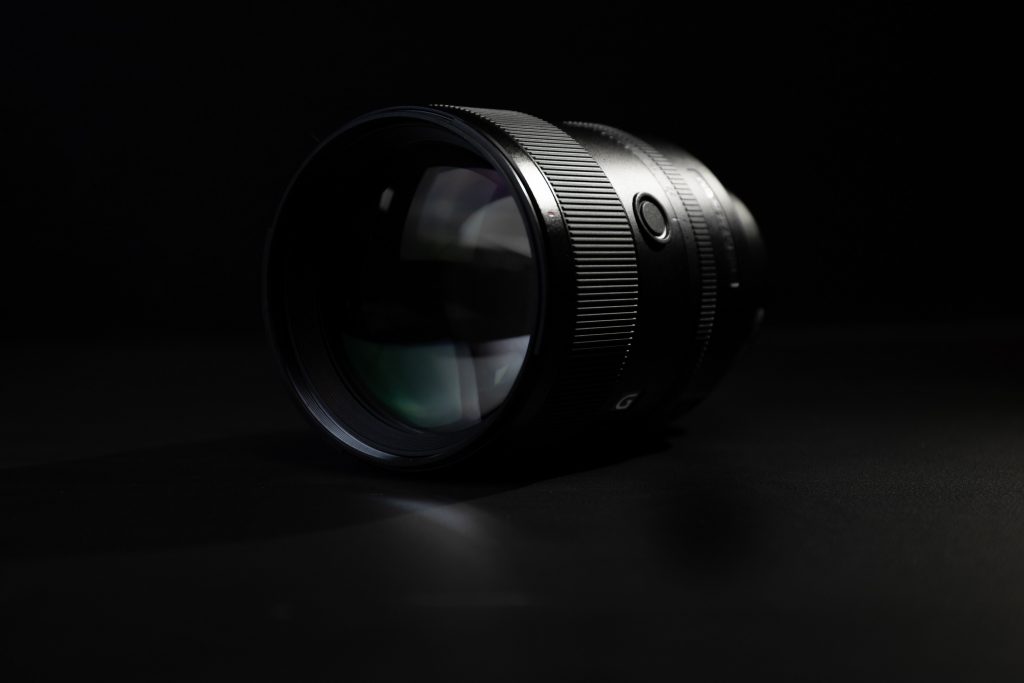 So, this write up is my usual MTF post; 10 new-from-box copies tested and averaged. They are Sony’s own copies, however, not the usual lenses we’ve bought off the shelf. I’ll repeat the test in 6 weeks when we get our own copies, but I have no reason to think it will be different. And just to be clear, Sony didn’t hover over me or approve my results; they’ll see this blog post for the first time exactly when you do.

A Bit About the Lens

I was permitted to share a bit of the background I was given on this lens; it has some new features. The paired linear motors moving two separate focusing groups haven’t been done before. There have been some attempts at paired focusing groups in zooms, but not in primes, and the pairs have generally been one ring and one linear motor. Also, these are new linear motors (depending on how you count, 4th generation) that are much more powerful and robust than earlier ones. This is the same motor design used in the Sony FE 400mm f/2.8 GM OSS lens, which we showed you in the teardown of that lens.

If I understand correctly, this focusing system allows the 135mm f1.8 GM to execute up to 60 AF instructions per second. {Correction: I misunderstood this part during the teleconference. What was said was that the A9 can give 60 instructions per second, and that this and the 400 f/2.8 come closest to keeping up with that.} That is faster than anything else Sony has made and does it to a higher degree of accuracy than they’ve achieved before.

Optically, the lens has what Sony’s engineers call the largest ‘extreme’ aspheric element ever made, and it’s up in the front of the lens, which they say helps both sharpness and bokeh. I think ‘extreme’ aspheric may be more of a marketing, than an optical, term. But what was very clear is they have (and I saw micrographs to demonstrate it) been able to polish this aspheric to a smoother degree than has been possible, reducing or eliminating any onion-skin bokeh. 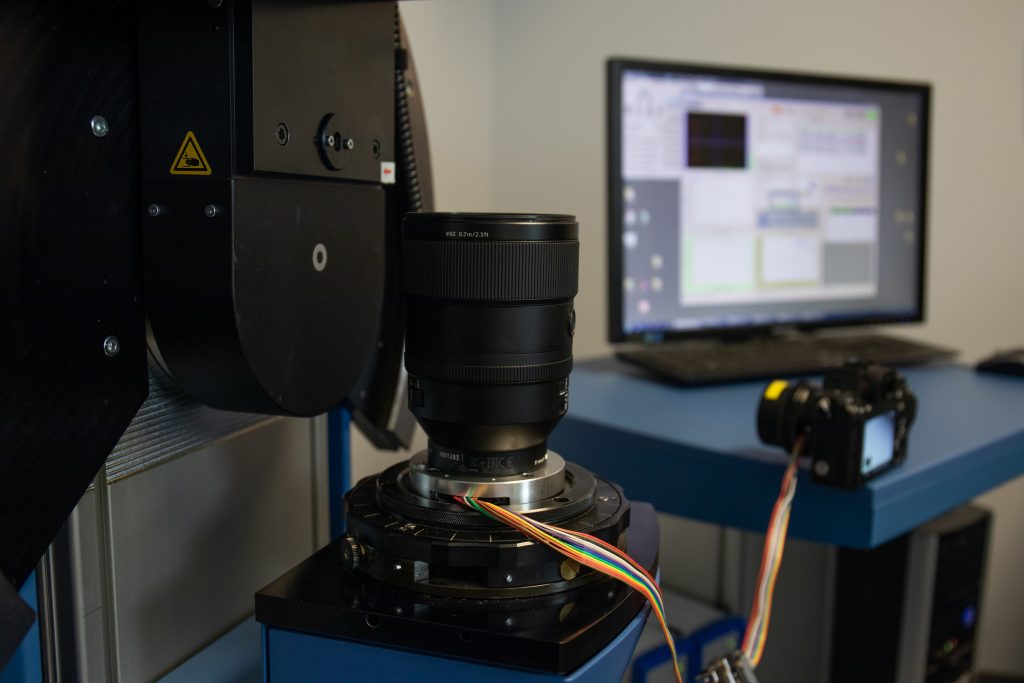 There were more features, like the 11-blade aperture and the aluminum-magnesium composite chassis (the same material used in the Sony 400 f2.8 again). I’m not trying to make this into a lens review; it’s just my report of MTF tests. But I wanted to let you know that I was really impressed by the discussions I had with Sony engineers. As many of you who follow this blog know, ‘impressed’ has not always been my opinion of Sony’s lenses. But I’m impressed this time.

Let’s make this simple and straightforward. In the center, that’s the highest MTF I’ve seen on a non-supertelephoto lens. The highest. Let’s put particular emphasis on the purple line, which is 50 lp/mm. That’s a higher frequency than any manufacturer tests (that we know of), appropriate for fine detail on the highest resolution cameras. We would consider an MTF of 0.5 at 50 lp/mm to be very acceptable. This is hugely better, nearly 0.8 in the center. We’ve never seen that kind of resolution before. 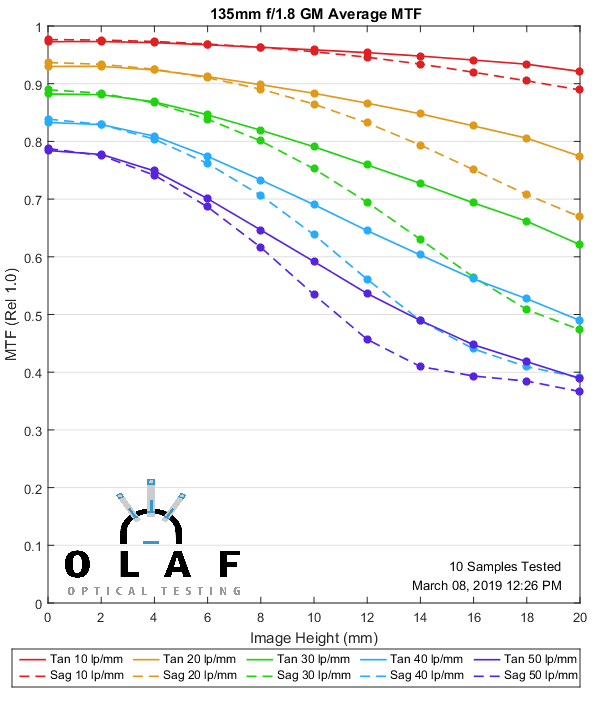 The MTF drops away from the center, of course, but even at the very edges, the readings are still quite high.

Let’s compare it to the Sigma 135mm f1.8, which until today was the sharpest 135mm we had tested. In the outer 1/2 of the image they’re pretty even, but in the center half, the Sony GM is dramatically better, especially at higher resolutions. 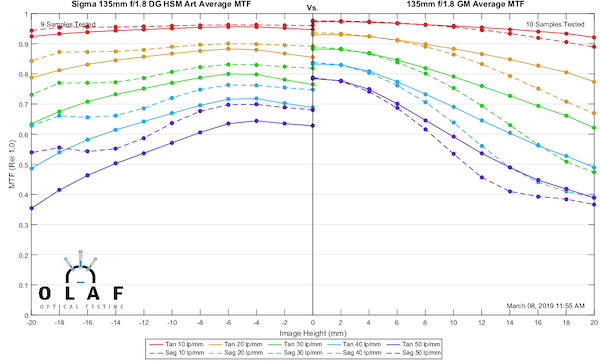 I’ll also throw up a comparison with the Zeiss 135mm Batis, which is really excellent, although not wide-aperture. The Batis has a considerable advantage since it’s being tested at f/2.8. Even at f/1.8, though, the Sony 135mm GM is clearly better in the center half of the image. 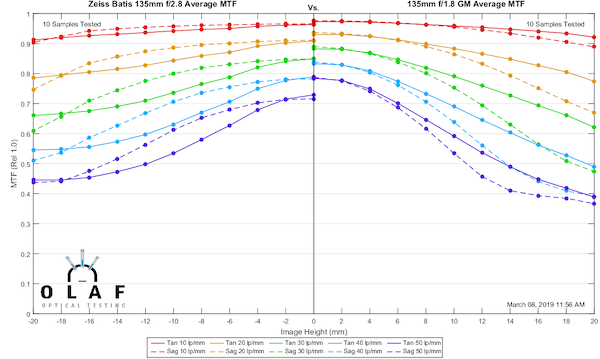 Aaron brought up that this was the highest center resolution either of us remembered seeing on standard testing, with 50 lp/mm reaching a ridiculous 0.78 MTF. We have, in the past, tested lenses at a higher frequency for ultra-high resolution sensors (150 megapixels). We found that a lot of lenses that were really good at standard frequencies died quickly at higher frequencies. 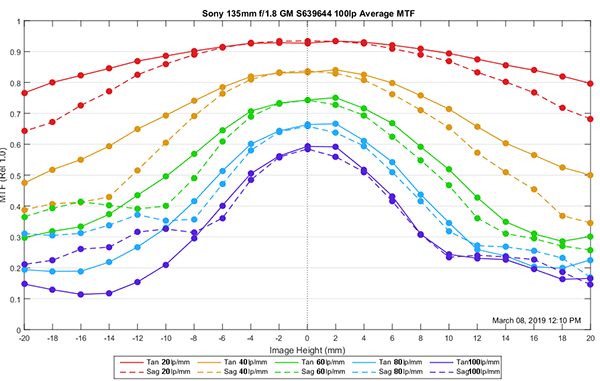 These results are insanely good. At 100 lp/mm the Sony 135mm f/1.8 GM has a higher MTF than most excellent primes do at 50 lp / mm. If you don’t speak MTF, basically that means this lens can resolve fine details that would be a blur on excellent lenses.

Back when we were doing that ultra-high resolution testing we tested all the lenses stopped down to f/2.8 or f/4; there was no way to get the kind of resolution our client needed otherwise. So we tried the 100 lp test at f/2.8. Honestly, I thought the resolution wouldn’t go up all that much. As is so often the case, I thought wrong. 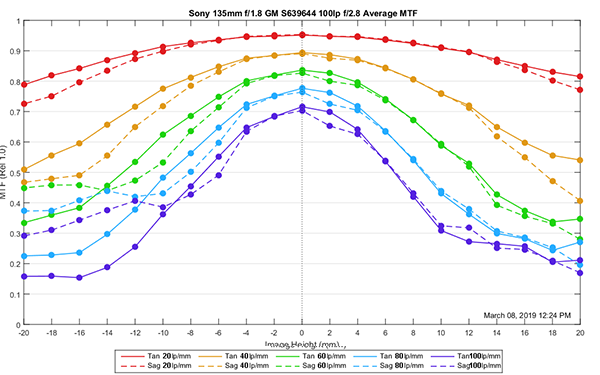 No lens we’ve ever tested has resolved 100 lp/mm this well at any aperture. One other lens was close, but I can’t tell you the name of it. We were under such strict nondisclosure that we never referred to it by name. It was just referred to as ‘the lens in question’ and was a huge prototype. But even that lens wasn’t quite this good at 100 lp/mm.

What does this mean for you? Well, in a couple of years if you are shooting a 90-megapixel camera, this lens will be the one that wrings the most detail out of that sensor. Right now it looks at your 43 megapixels and goes, “that’s cute.”

But as far as the test goes, the results are pretty simple. This is the sharpest lens we’ve tested. Period. (At last count, that’s out of 300+ lenses tested.)