First Impressions with the Fuji X-Pro3 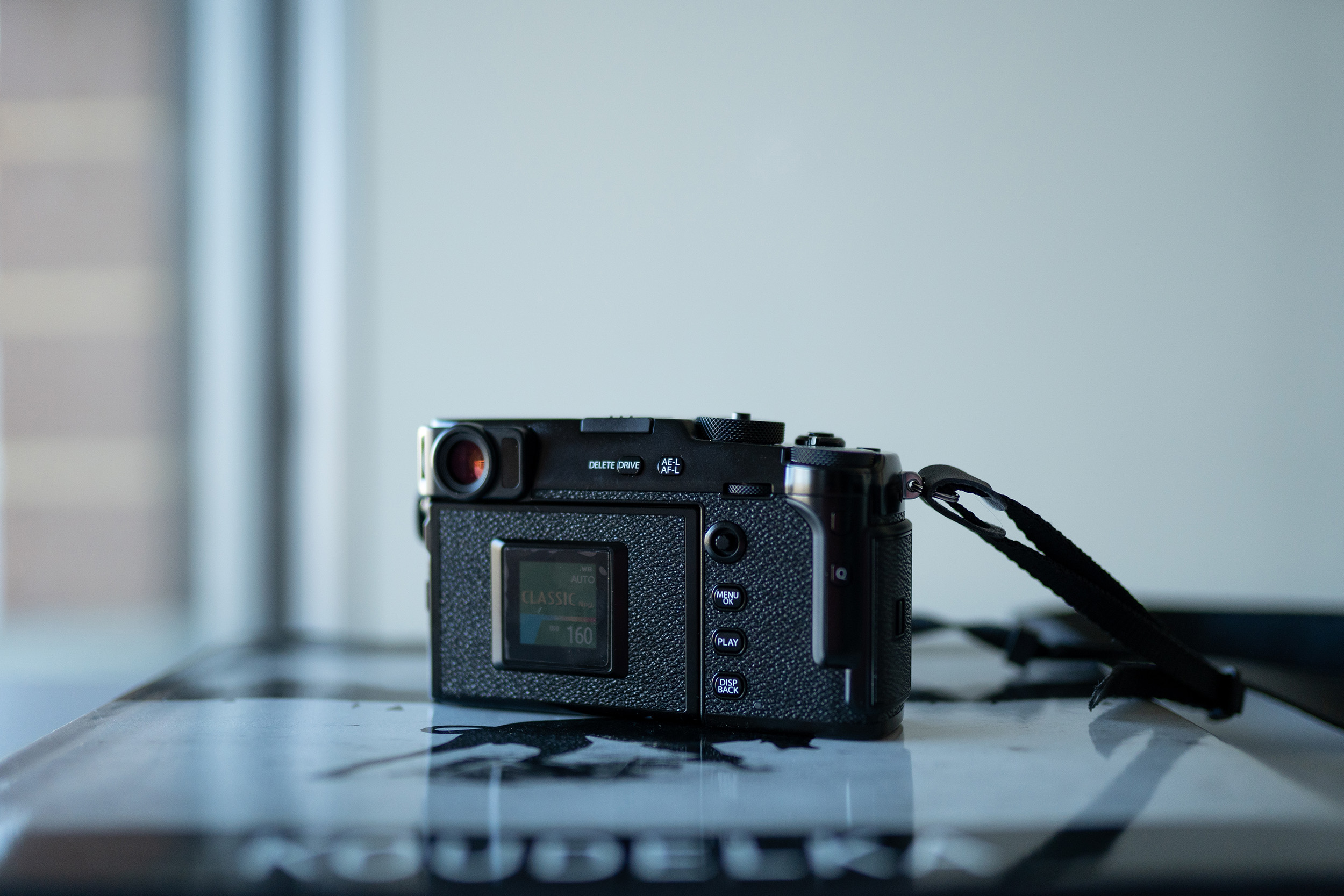 Fujis have always been the dark horse of the mirrorless camera realm, and it all began with the Fuji X100. A small, APS-C, non-interchangeable lens mirrorless camera that arguably took the digital camera world by storm. This camera got the ball rolling for Fuji. It had unique (for the time) retro styling, an excellent sensor, decent autofocus, and compact yet ergonomic form factor. This spawned an entire line of successful mirrorless cameras from consumer cameras up to professional digital medium format cameras. The latter is a new development, but today I want to focus on what has been their bread and butter, the APS-C area. As some of you know, Fuji has quite a long list of prosumer level crop sensor cameras. There’s the Fuji X-E3, Fuji X-T3, Fuji X-Pro2, Fuji X100F, Fuji X-H1, Fuji X-T30, etc. with quite a bit of overlap with their older models. One of my biggest gripes with Fuji is the amount of overlap in features of all of these cameras. Now, before you get on to me and say well, the X-Pro2 has an OVF and the X-T3 has a better EVF, and the X-E3 doesn’t have weather sealing blah blah blah I just want to say that I meant that they all have incredibly similar outputs with generally the same features. Until the Fuji X-Pro3, that is. 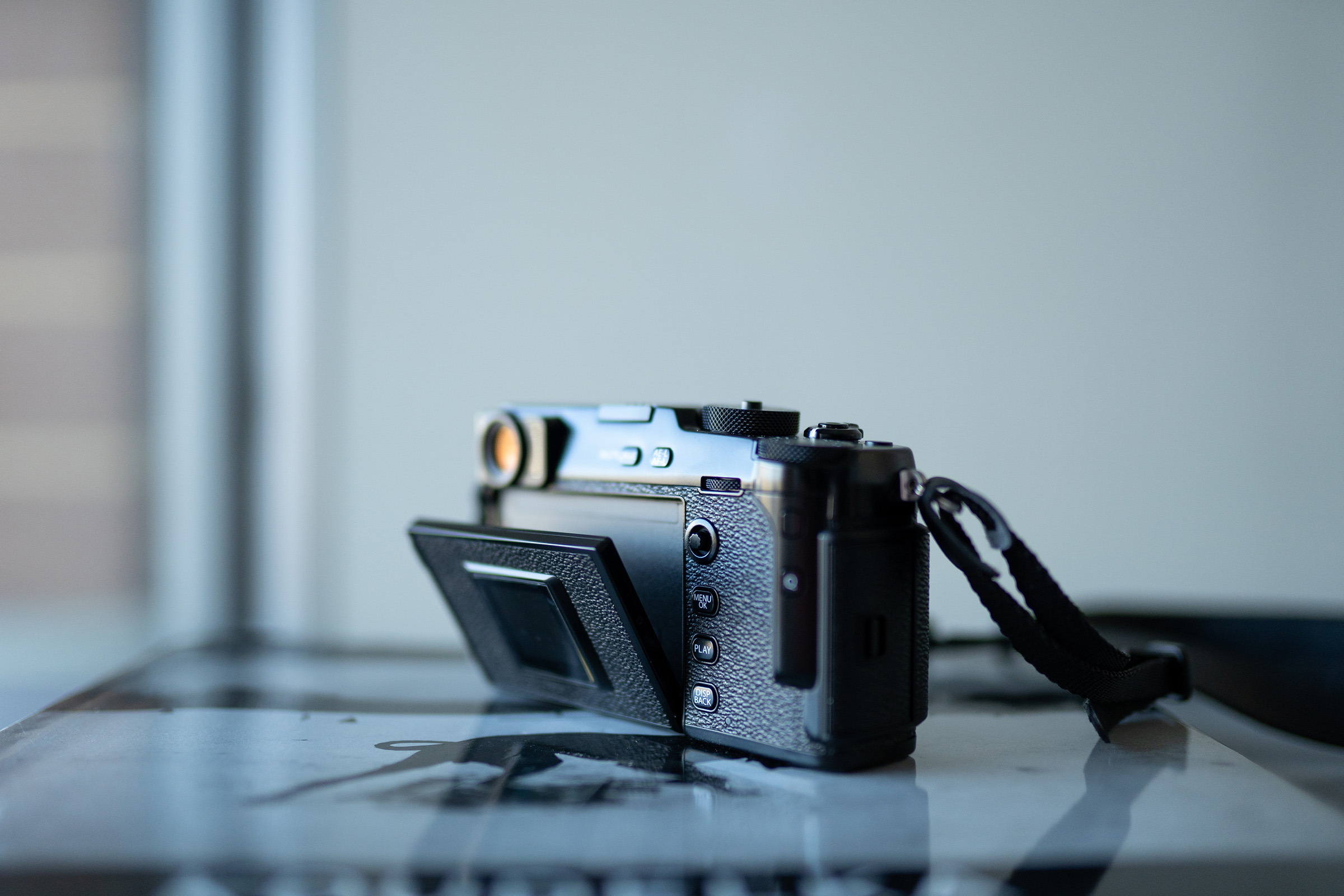 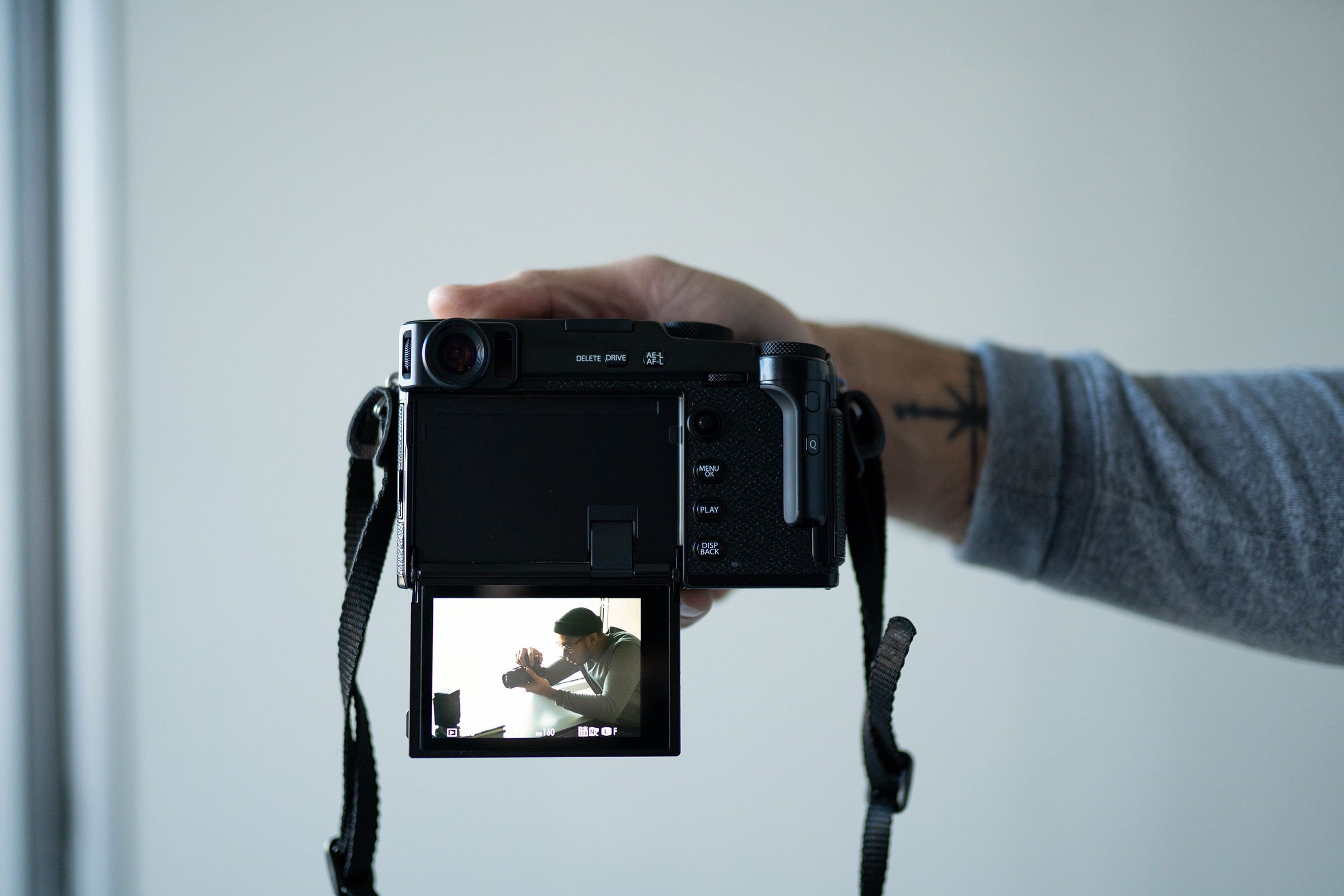 The Fuji X-Pro3 borrows many elements from the Fuji X-T3, with the main one being the sensor. They both share a 26.1mp BSI sensor, 3.69m dot OLED EVF, dual UHS-II card slots, weather sealing, and 4K video recording, among many other features and settings. You get the idea. The thing with the X-TX and X-ProX line is that they have always come one after the other with remarkably similar features deciding on which one to buy or rent as simple as which form factor do you like the most? At the end of the day, these two cameras will take the same photo. All that was thrown out the window with the X-Pro-3. I know, I know, you’re waiting on me to talk about the big elephant in the room: the lack of a rear screen. First, though, I want to talk to you about what I thought of the performance of the Fuji X-Pro3 before we talk about the actual ethos of the camera.

I’m no stranger to Fuji cameras, and I’ve always owned the X-Pro line because I like using the OVF in specific situations. The one thing I hate most about mirrorless cameras is that when I’m shooting a dark reception, it’s more difficult for me to see what’s going on through the viewfinder. Having that OVF and zone focusing makes for an effortless shooting experience. Otherwise, I generally stick to the EVF. For starters on differences, the X-Pro2 EVF is notoriously small, and the X-Pro3 fixed that. It now utilizes the same 3.69m dot OLED EVF that Fuji’s other top-of-the-line cameras offer. Having to go back to the 2’s tiny EVF has not been fun. Other improvements I like to refer to as “generational upgrades,” meaning everything about this camera is slightly better than the previous model. The updated 26.1mp BSI sensor is much better in low light than the older 24mp variant found in the X-Pro2, focusing is quicker and more accurate, and battery life seemed slightly better in my usage probably due to the lack of a rear screen. I’m sure the newer X Processor 4 helps with the latter two as well. Compared to the X-Pro2, everything on the X-Pro3 just seemed “snappier.” I’m relatively new to using UHS-II cards, so being able to shoot through a scene and not hit a buffer is really, really nice. 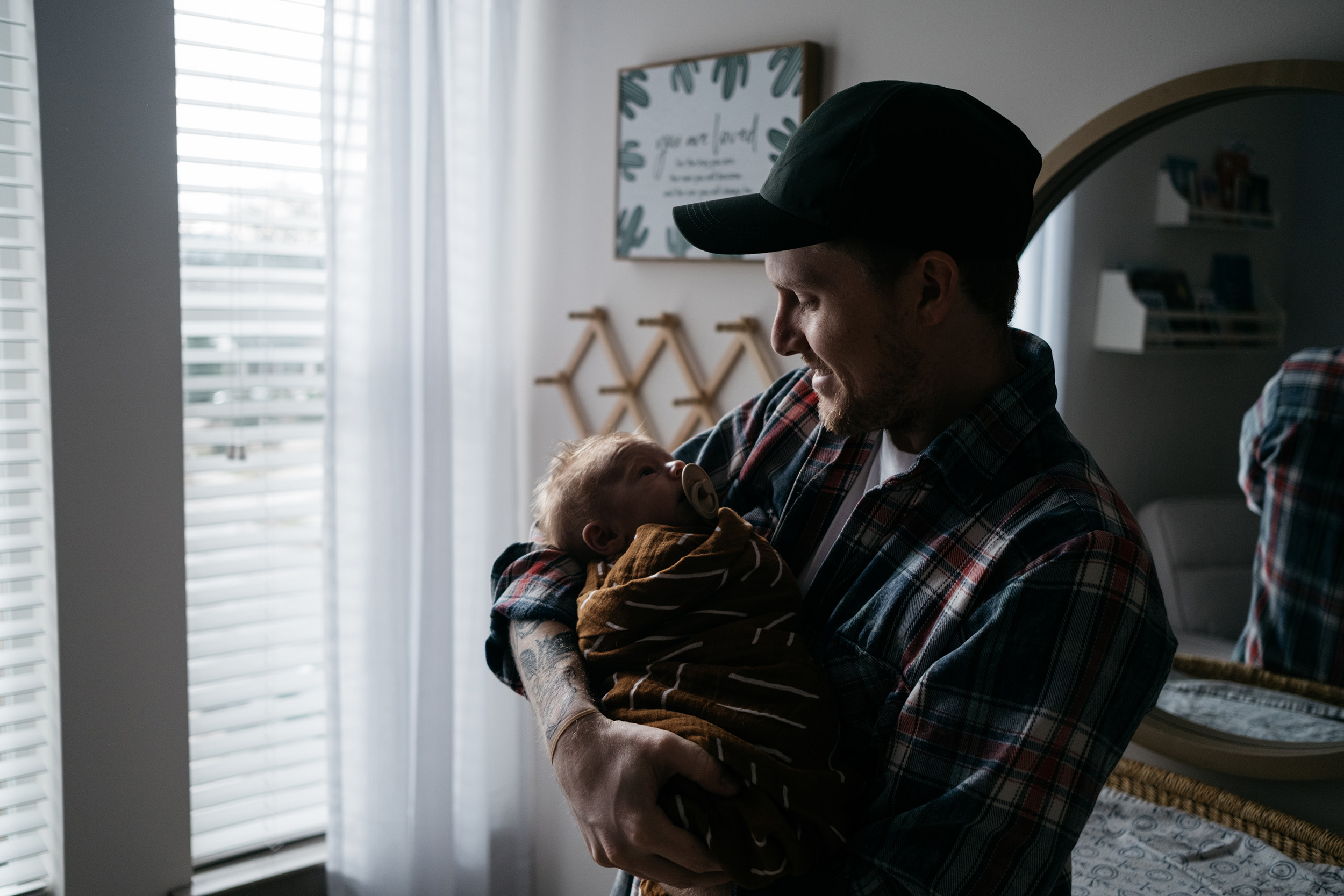 But let’s tackle the rear screen (or lack of). It’s a polarizing design choice. You either love it or hate it; get it, or you don’t. Fuji isn’t the first digital camera manufacturer to do this, though. When the Leica M-D hit store shelves, people had dug in beliefs one way or the other. “It’s the closest feeling to shooting film you can get with a digital camera,” or “just turn off the rear screen, and you have the same camera.” The reason I bring this up is that in the Fuji world, many people wished that Fuji would take risks like this. They’re a small, niche manufacturer catering to a mostly enthusiast crowd. I’m going to go ahead and say that I love it. 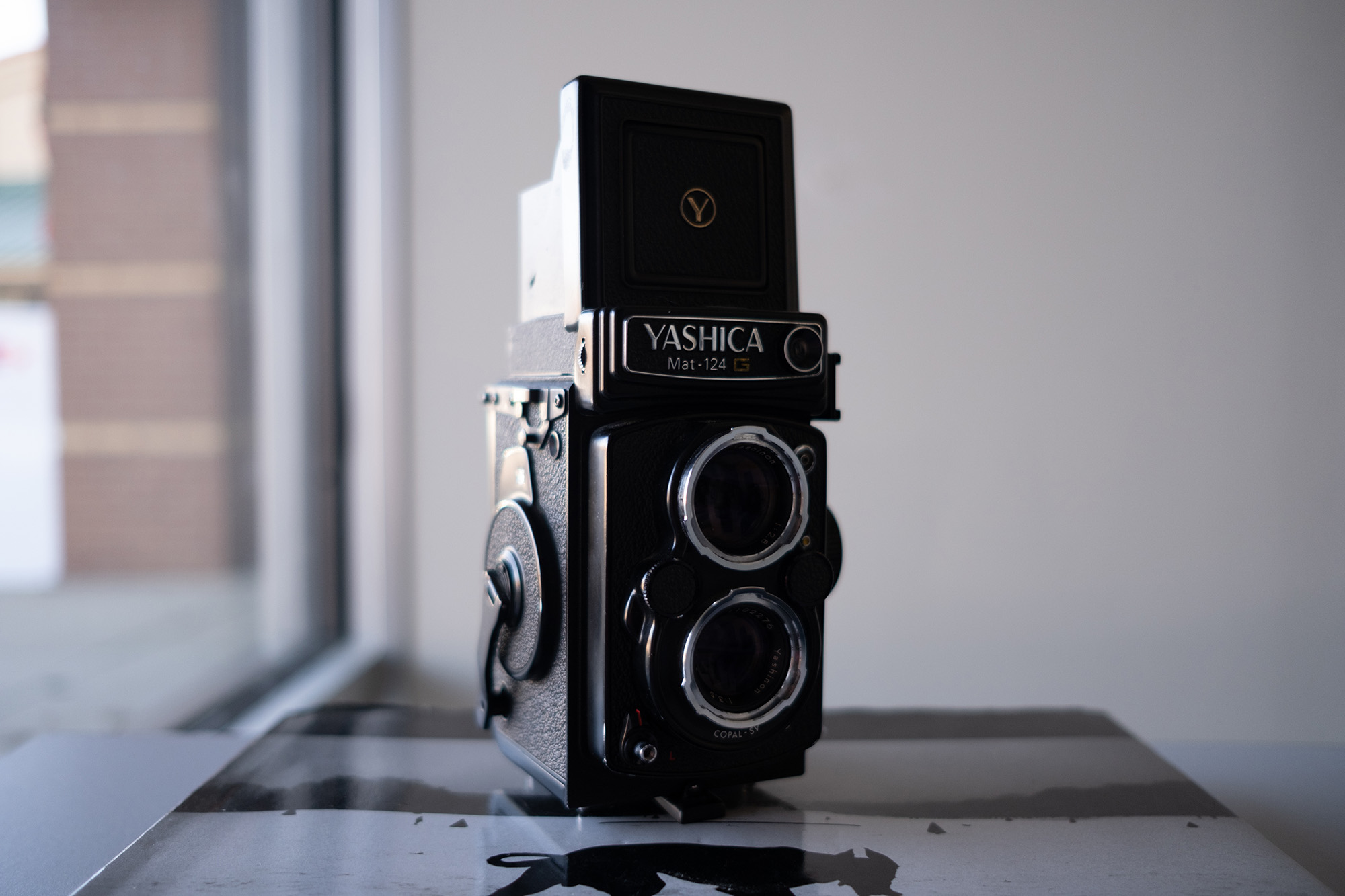 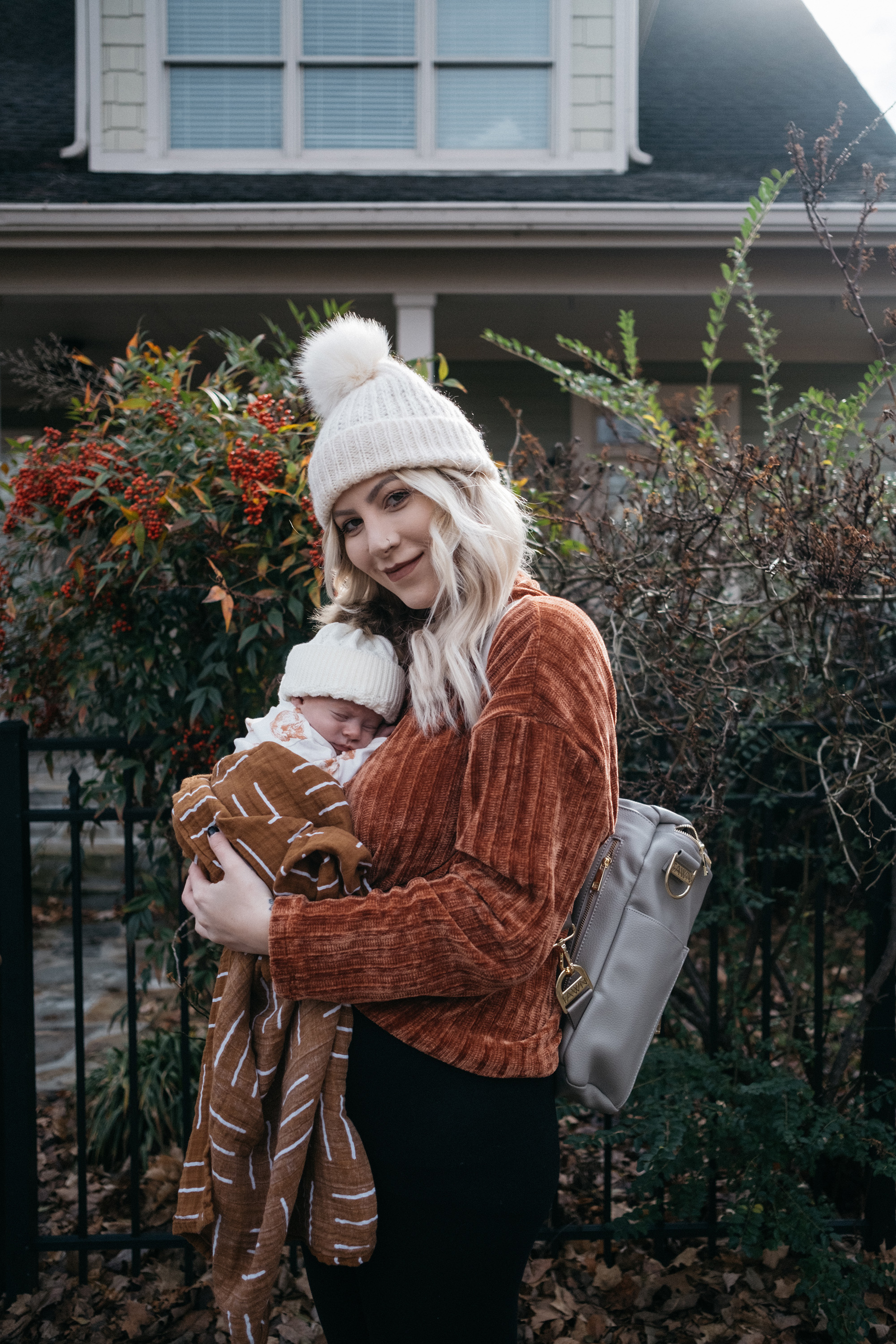 Fuji created a niche for the X-Pro line to thrive. They made it substantially different from everything else they currently produce. I think they really created a perfect personal work camera. In most professional settings, it’s nice to have a rear screen easily visible. You might not look at it all the time, but when you need it, you need it. I attempted to use this camera in scenarios I would typically shoot it. I shot a wedding with it as well as just a weekend around with my wife and new baby. More often than not, when I’m checking the rear screen, I’m glancing at settings and quick compositions periodically. The small, rear LCD that emulates an old film box top gives me all the relevant information I need quickly, such as the exposure settings, white balance, and, of course, the film simulation modes. Image review you can do rapidly through the viewfinder if you need to, but I felt like a weirdo just looking through my camera clicking through images. In handling, the lack of a rear screen doesn’t bug me since all of the functions you need to shoot are adjusted via external dials and buttons. This is not a camera for everyone, though. If you’re a person that needs/wants to chimp, then folding the screen down to review images is a pain. It’s really meant to be used without thinking about studying images till later when you’re just sitting around. With that being said, I think this camera slots in really well as a fun, personal work camera. I would use this camera for the work that I do, but I also think I’m in the minority. Your thought process does change when you’re not cheating and looking at the screen, and it’s refreshing. I’m aware of all of the arguments for just getting a camera with a screen and turning it off, but the fact that it’s still there and easily accessible doesn’t give me the same feeling. If that’s your preference, then that’s fine. That means this camera isn’t for you. All this being said, who do I think this camera is for? I think it’s for film shooters who need a digital workflow and want something as close to that experience as they can get. I think it’s for professional shooters who want to use something very different from their “work” camera and want to take a step back in their personal work. I could go on and on. Honestly, you owe it to yourself to give the Fuji X-Pro3 a shot no matter what kind of work you shoot. It is a vastly different experience. 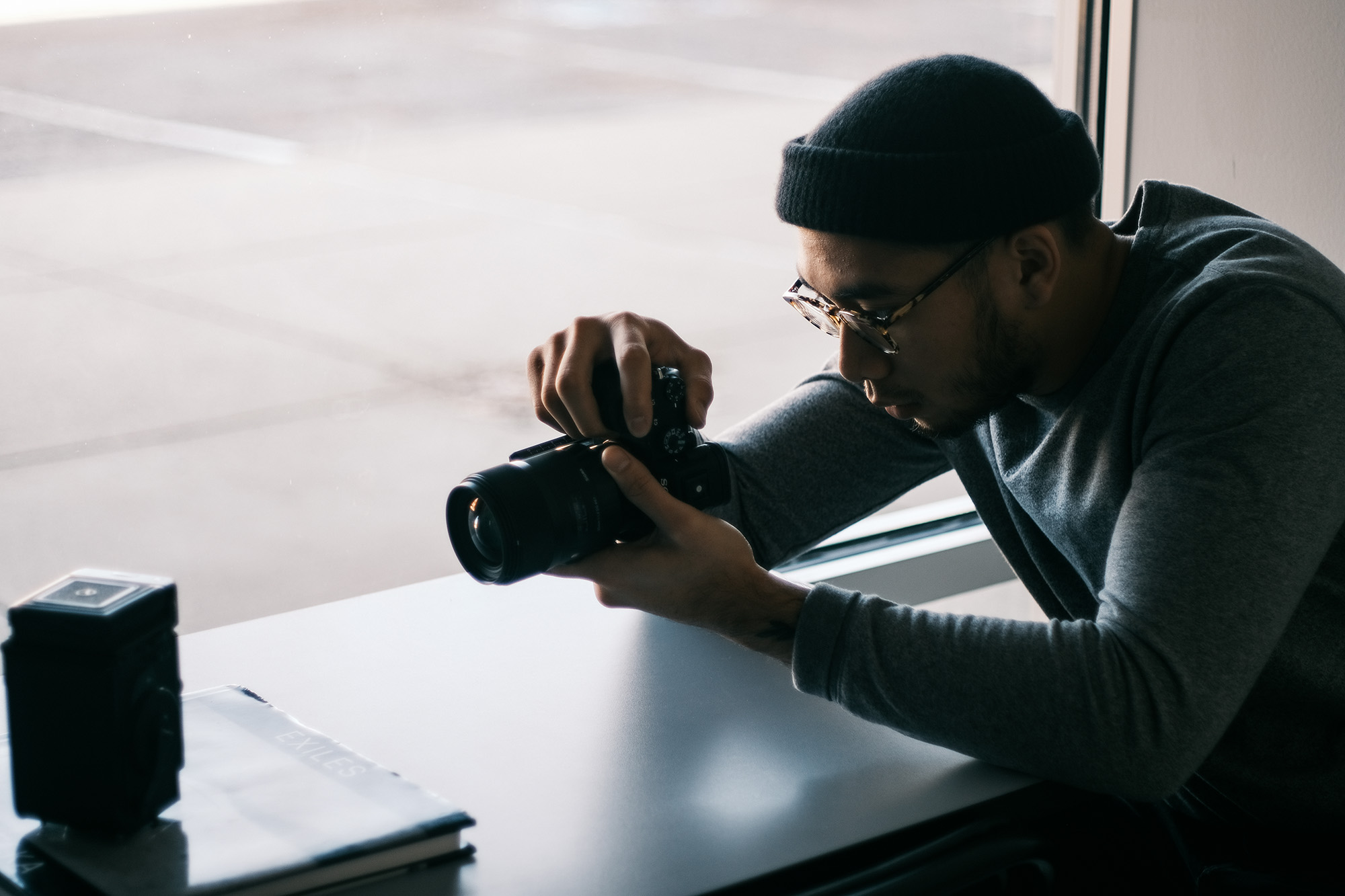 The last thing I want to touch on briefly is some ergonomic and material changes. Since Fuji all but eliminated the rear screen, they also eliminated the D-Pad, which gave me a little trouble at first when I was going through my set up process, but after a while, it became a non-issue. They also added touch screen functionality, which I like. Generally, I think touch screens are annoying because I always seem to bump them with my nose (left eye shooters know the struggle), but since there is no screen, it’s implemented well. Otherwise, all the functions of the X-Pro2 are in the same general places. The Fuji X-Pro3 gets rid of the magnesium chassis of the X-Pro2 in favor of lighter and stronger titanium top and bottom plates. It also comes in 3 colorways. The standard black finish has a different finish that doesn’t show fingerprints as much. Then there are two “dura” colors: Dura Black and Dura Silver. These are finished with a new process that makes them scratch resistant. Before you ask, no, we only rent the regular black finish. Although, if we got some Dura Silver models in, I wouldn’t be mad about it. They look similar to the Contax G1 and G2 of old. 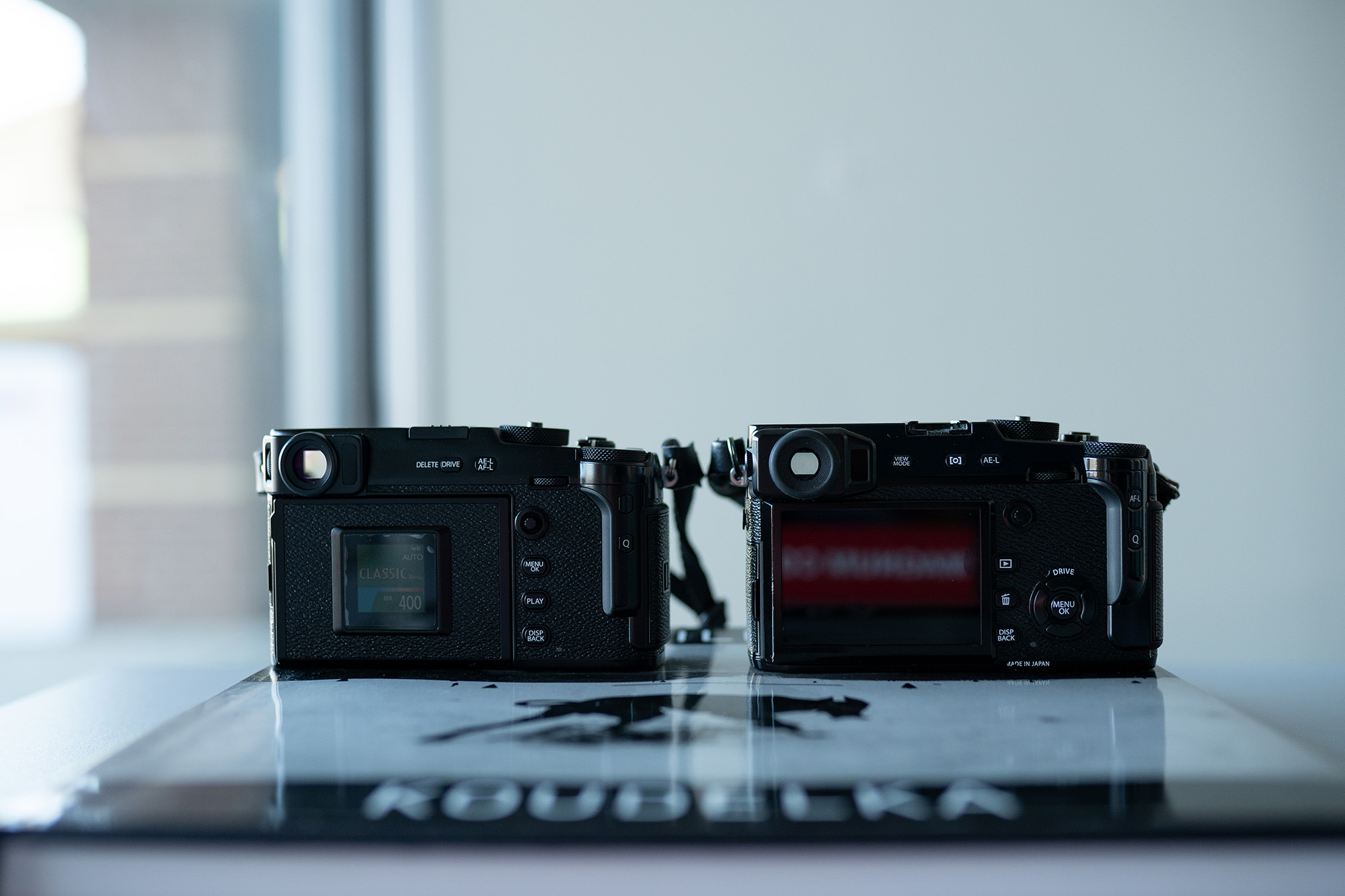 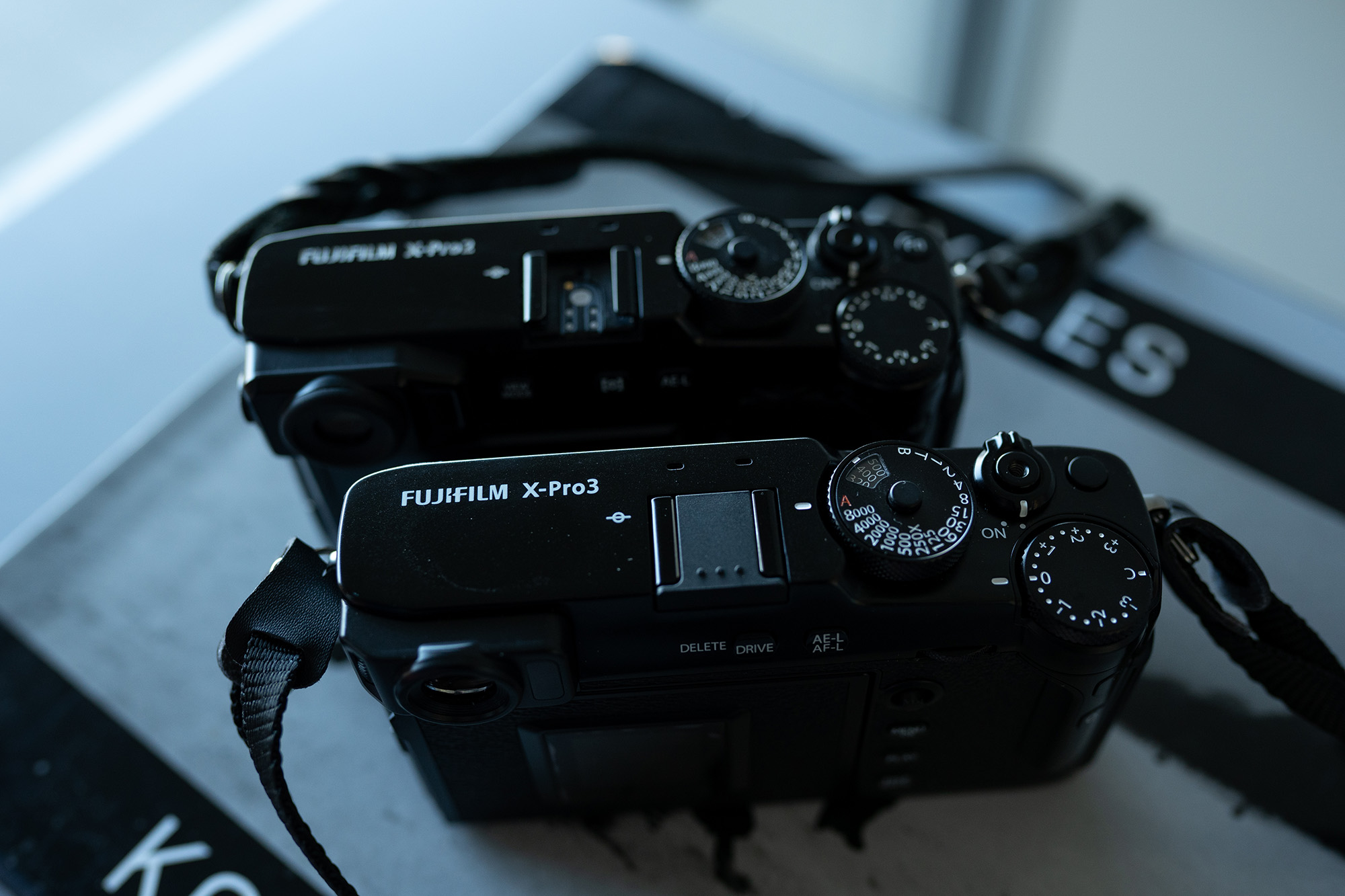 In closing, I think Fuji knows that sometimes it’s the experience of shooting a camera that often can be more important than the images you make. That’s what Fuji is selling with this camera: an experience that is different than almost any other camera on the market. Whether or not that experience translates to different and/or better images are going to depend entirely on you. In that sense, I don’t view this camera as an upgrade from a Fuji X-Pro2 but a new camera entirely. Some people are going to hate and not understand the design choice, but I must say that you owe it to yourself to at least give it a shot. You might enjoy it.