Distinguishing the Differences in the Atomos Line of Recorders & Monitors 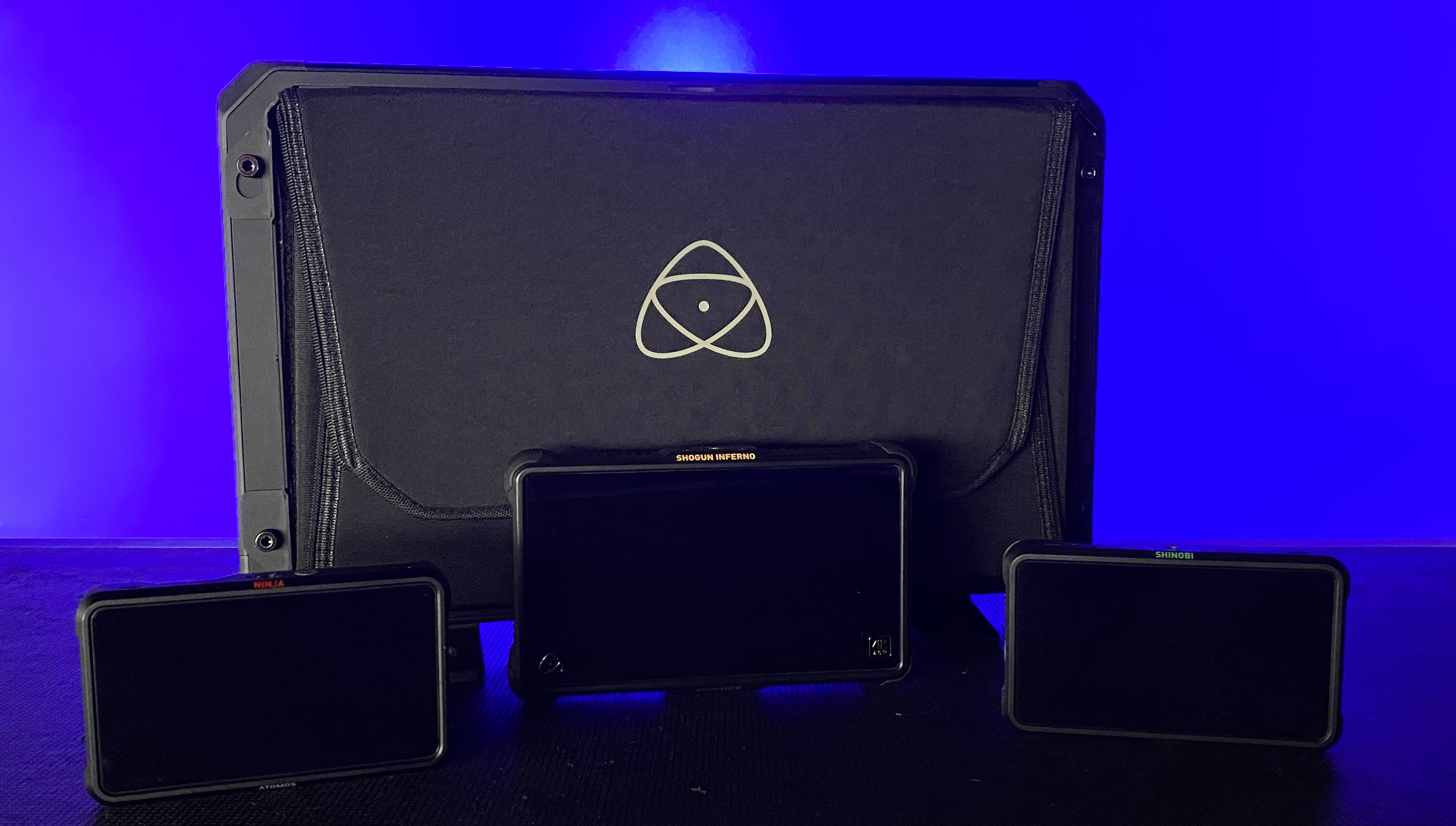 Atomos is an Australian company well known for its wide variety of monitors and recorders. Not only do you have the ability to record, but change the look of your shot in-monitor in Look Up Tables (or LUTs) to streamline with editing. In some instances you can stream four cameras into one monitor at once, making them the go-to product for productions both large and small. However, with a great selection also comes great confusion. There are so many monitor options these days; it can feel like you’re drowning. As a video tech, I will guide you through the many differences and uses you will encounter with each line of monitors. This can be read all at once or used as a reference when renting or purchasing your own monitor. So let’s take a moment and look through the various options and feature sets within the Atomos lineup.

Each monitor is equipped with absolute essentials that you can expect in every experience. Touch screen displays dominate the display and eliminate the need for buttons. The exception is the power button, so you don’t accidentally turn the monitor off. 4K, or 4096, is the standard resolution for each screen as well.

Other features such as recording and Look Up Tables are not present in the Shinobi line of monitors but present in others. You can plug in LUTs from an SD card. Now that we have established the commonalities, we can discuss the differences and common uses for each monitor.

On every recording monitor, you have the option of setting up the codec that you need to record. The only exception is the Shinobi. Atomos does an excellent job of adding how much recording space you have left. Whether your camera is stuck on a tripod onset or guerilla-shooting, you can set up your recording rate before-hand and not be surprised when the SSD is full.

Whether you’re new to videography or a Director of Photography that needs a small monitor, you may want to try the Atomos Shinobi. Connecting the Shinobi to a GoPro or a gimbal on-the-go is a great place to start. Get to know the Shinobi SDI first. You’ll get a feel for the two great cable streaming sources: HDMI and SDI.

If you want to add any LUTs, you can add them via SD card. They are not included. There’s only one HDMI input, but you can connect to another monitor with the SDI Output. You should be aware this cannot record. Uses vary, from connecting to GoPros, to guerilla-style filmmaking, or even on-the-go YouTuber videos. This monitor will help you figure out the look and style you need on set. 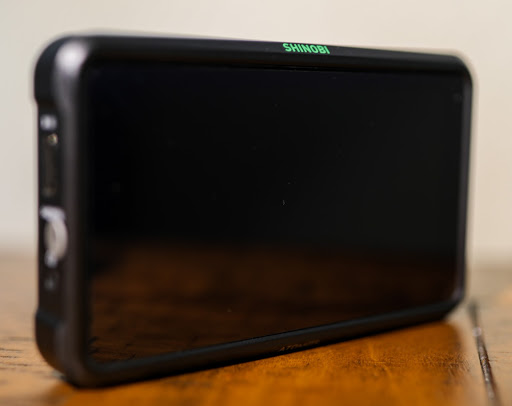 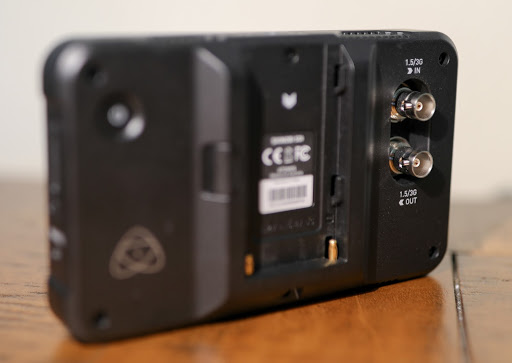 The next step up is the Ninja line. Within the Ninja lineup, have the Atomos Ninja V (Five), Atomos Flame, and Atomos Ninja Inferno. These monitors are for the HDMI enthusiasts. This is where you start learning about all the different codec and audio options. Starting here, you can record on SSD memory cards.

The Ninja V is a five-inch powerhouse. Much like the Flame and Inferno, you get all the different codecs and LUTs. What is so great is the ability to mount it on a DSLR of your choice and not worry about falling off. But there’s more. Until recently, the codec ProRes RAW could only be accessed through SDI. Nikon Z owners can rejoice at this news.

The Flame and Ninja Inferno make moving around easier with rubber bumpers on the edges, a Sony L-Series battery plate, and the ability to connect to a plate or grip arm. They are perfect for large camera setups built on top of sturdy tripods. These monitors are perfect for cameras like the Canon C300 Mark II or the Sony FS7, or DSLR cameras 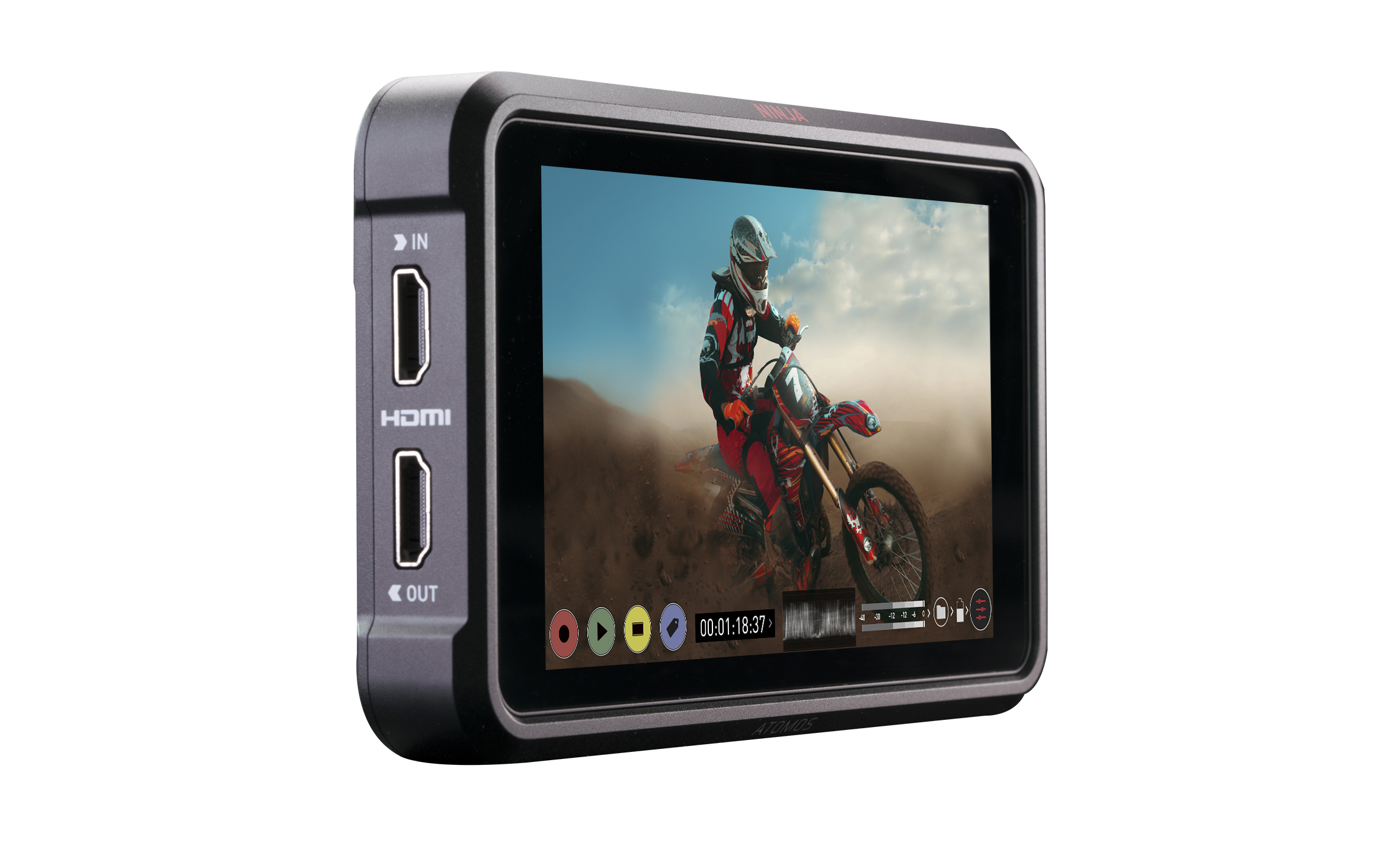 The Atomos Shogun Flame, Atomos Shogun Inferno, and Atomos Shogun 7″ are the next steps up. What’s so special about these guys? Well for one, they include both HDMI and SDI inputs and outputs. One day you may be on a small film set that requires SDI. The next day, you could be shooting a moving shot with a Freefly Movi Pro Gimbal. These monitors are 7″ with enough space to view your shot with advanced features like video scopes.

With the Atmos Shogun Flame, you get one standard HDMI and SDI in & out. But the Shogun Inferno is where things start to get wild. See those three extra SDI ports? Those support higher bandwidth, which makes it ideal for RAW input signals. Either way, you have more than enough options for cinema, broadcast, even RAW Workflow.

As a word of warning, these are not great on top of DSLR cameras. I found out the hard way that these are too heavy and can fall easily. There’s a reason why that rubberized armor is there.

The Atomos Shogun 7″ boasts all of these functions but goes a bit further. You can set up a four-camera multi-stream. This is useful for sports or other broadcast situations where communication is critical.

Pros: Armor, multiple options for a variety of cameras.
Cons: It can be confusing to tell the difference between The Inferno and Shogun 7″. 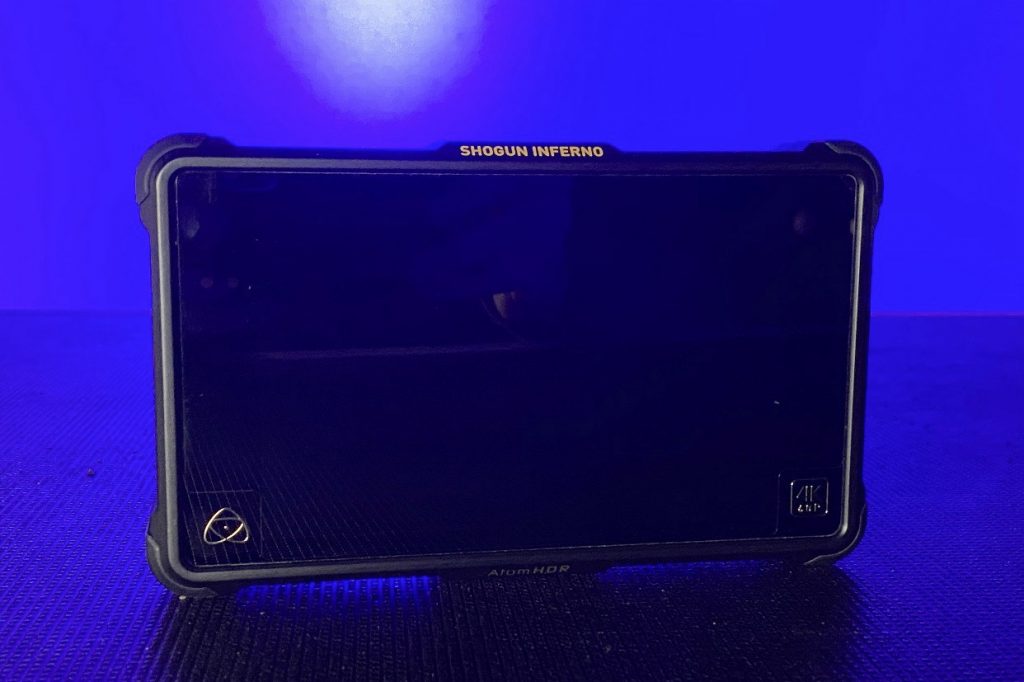 The 19-inch screen monitor is an ideal large monitor for filmmakers. You can check on histograms, LUTs, waveforms, and more, all within the menu selections of this monitor. The most significant appeal is the ability to switch between four cameras. Touch the top left side, and a menu pops up with several options. Click the SDI multi-stream, and in a few seconds, the setup is ready to go. Once you have those cameras in place, connect each SDI into one of the ports.

Let’s say you are now a director. Do you want to hold a handheld monitor all day long? No. You want a large screen that gives you all the details during recording. And you need the script supervisor and Assistant Director to be able to see as well.

What the heck is the difference between the Atomos Sumo and the Atomos 19M? Whether you’re shooting the next Matrix or recording a documentary, sometimes you need multiple angles. The Sumo can switch between four cameras at once, and still record. The Atomos Sumo 19M has many of the same functions but lacks the multi-stream capabilities. 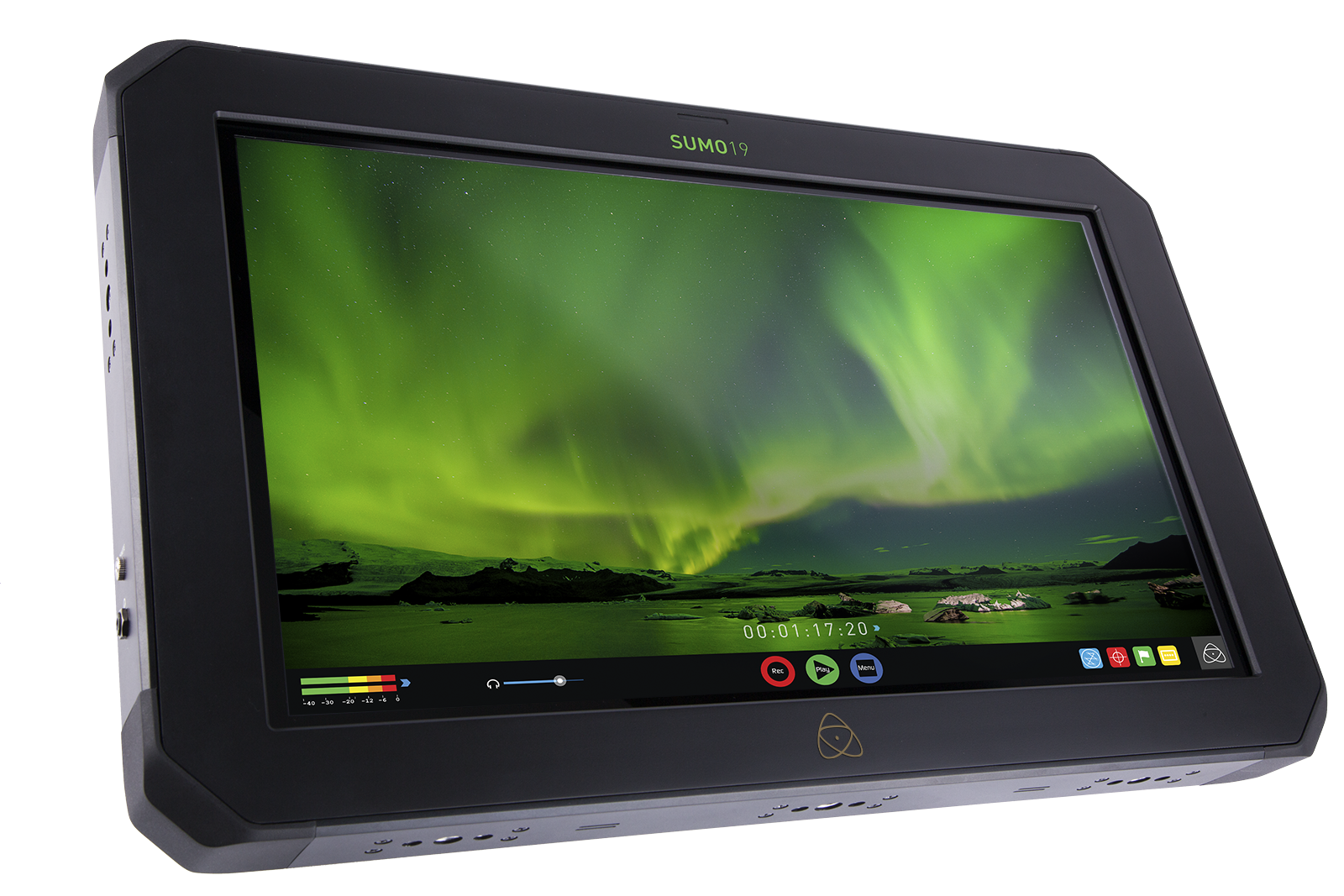 To Infinity and Beyond

There is a time and place for each of these monitors. Each one has its own strengths. The examples above are just the first line of monitors, numerous that they are. However, there is a new line of monitors coming soon: Atomos Neon. Two words stick out in my mind for this new set. “Future-proofing” and “wireless.” B&H does not have a definitive release date at the time of this article. Rest assured, there will be some field testing at Lensrentals.com when we get our hands on one or two.

The future of monitors will become more seamless, and Atomos is one company that makes that possible. In an industry where 4K is king, these monitors stand out in their mobility and recording capabilities. Atomos has a lot of monitors. In the world of film and photography, it’s easy to say one monitor is better than another. Personally, I quickly become overwhelmed by so many options. But the more I’ve worked with each monitor, the different they grow in my mind. The Sumo may be overkill if all you need is a monitor that is larger than your camera’s LCD screen. The Shinobi is excellent for that.

Are you shooting a wedding? Then consider a Shogun Flame or Ninja Flame. Do you plan to film a sports event or comedy festival? Then the Sumo and Shogun 7″ and their multi-stream functionality.

Congratulations! You have passed this crash course in every line of recorder monitors that Atomos has to offer. Happy renting!

I’m Josie Sweeney and a Video Tech at LensRentals. On the side I’m a novelist and screenwriter. On the other side, I host a podcast. If there’s free time, I nerd out over Doctor Who and/or Dungeons & Dragons.