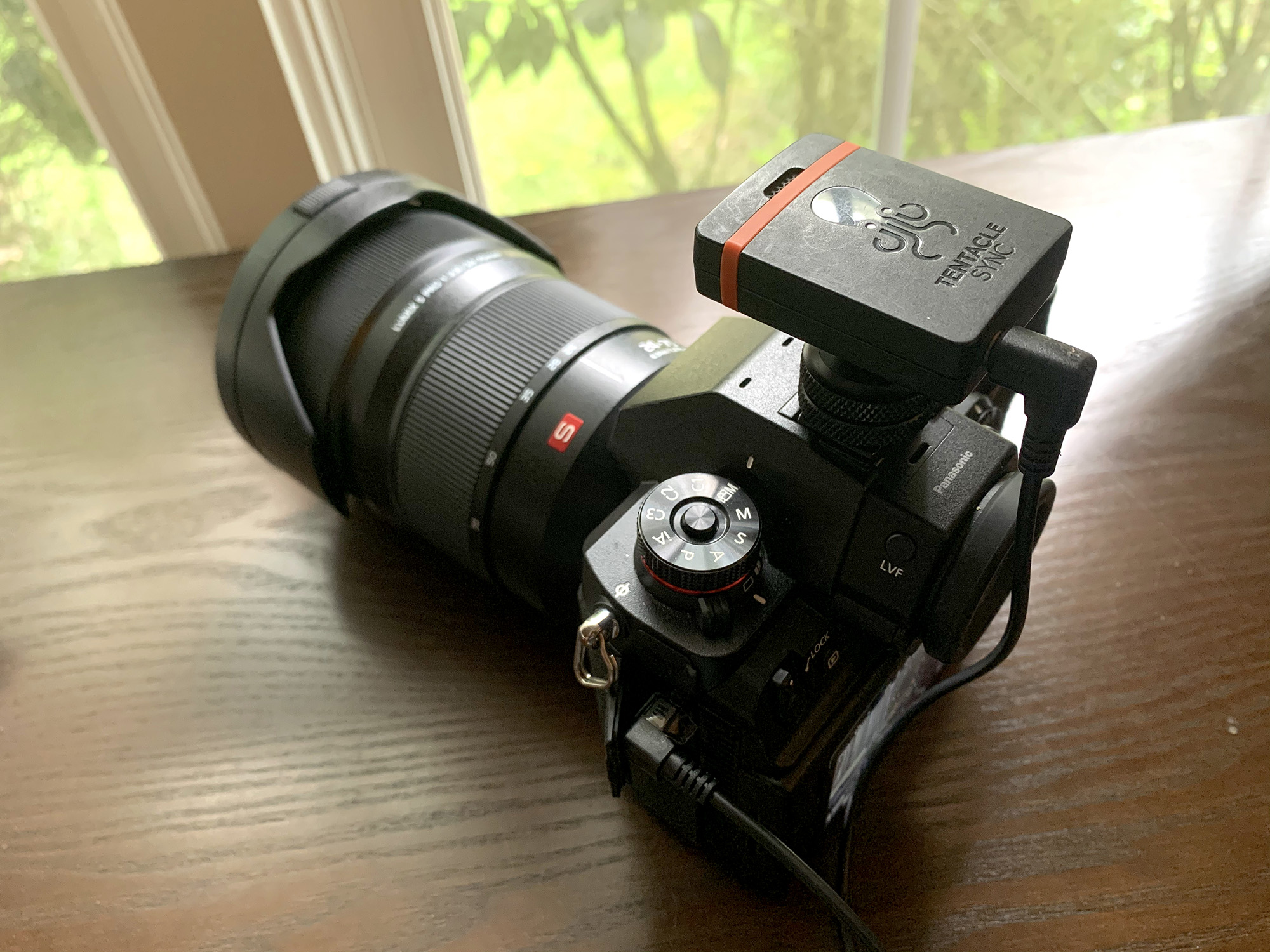 The quickest way to capture the hearts of techs at Lensrentals is to design your product to be easy to use. Multiple thousands of items per day pass through the tech room, and they’re each individually inspected by actual human beings. Often a tech will have to check a hundred or more things per day. Any minor design inconveniences like laggy buttons, cumbersome menus, or (our sworn enemy) inadequate control apps can compound one on top of another, turning lost seconds per copy into lost hours per day. Support phone calls, too, go from simple to mind-numbingly frustrating, often depending on how well a product is designed. It’s not enough to be reliable. If troubleshooting your product requires digging through archaic menus, pushing tiny internal buttons with paperclips, or operating dip switches, we’re going to get frustrated with it no matter how well it works.

Conversely, putting genuine thought and care into the design process, empathizing with the user, and taking care to make your product a genuine pleasure to use is enough for us to sing your praises whenever we can. That’s why I, along with many of the support techs here at Lensrentals, so often recommend the Tentacle Sync E. Unlike just about every other timecode device we carry, it’s (get this) well-designed and straightforward enough that just about anyone with a basic understanding of timecode can use it. That’s a tough bar to clear in the world of timecode, where any device, kind of by definition, has to work with multiple other devices in nearly endless possible configurations. It’s even more challenging when you design your product around an app, with little in the way of physical controls and no LCD screen whatsoever.

Before we get into what makes the Tentacle Sync so unique, though, let’s talk about what’s included in a basic rental. You’ll get the Tentacle Sync itself, one 3.5mm to BNC cable for standard timecode in/out ports, one 3.5mm to 3.5mm cable for timecode over audio (more on that later), a charger and USB-C cable for charging, and mounting gear, including a 3-D printed 1/4 20 adapter we actually make ourselves. 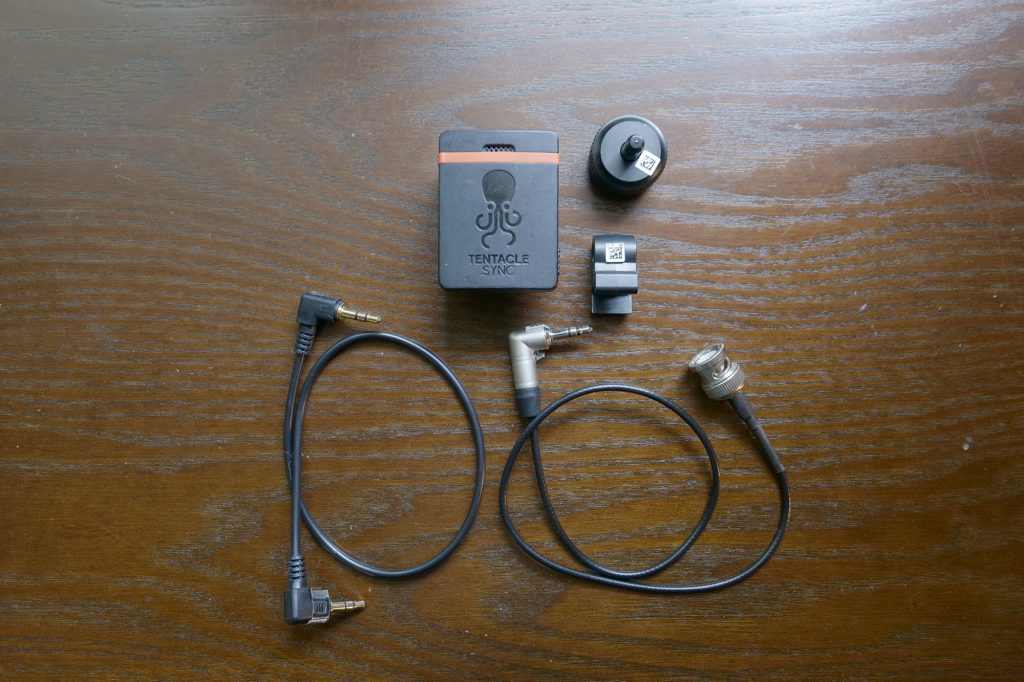 Control, like I mentioned, is done almost exclusively through an app. Usually this would be a massive red flag. I’ve lost count at this point how many products I’ve seen with borderline unusable apps. Because I’ve never worked in video product manufacturing, I’m not remotely qualified to speculate as to why that might be, but that won’t stop me from guessing. My guess is that it’s a problem of management priorities. The first problem, I think, is that app developers likely aren’t involved in the process from the start. Instead, basic Bluetooth or WiFi control is built into the device, and developers are brought in later, only after the physical product design is mostly finished, to design an app around it.

The second problem is that the difference between a “good enough” app and a “great” app isn’t all that vast. The differing factors are often just design elements like icons and menu structure, not basic operating functions. From a CEO’s perspective, why spend twice as much money on design and user testing for a “great” app when you can ship with a “good enough” app?

Luckily, the Tentacle Sync app doesn’t suffer from those problems. Bluetooth connection is reliable and immediate, and countless small touches make it clear that serious consideration went into every element of the design. There are too many handy features to list all of them, but here are a few of my favorites:

I should clarify here that, while app control happens over Bluetooth, timecode sync is NOT Bluetooth dependent. This is a pretty common misconception. The Tentacles actually use the same technology as other devices like the Lockit Box and Denecke Slate to ensure that drift is less than one frame every 24 hours. Once they’re synced, they’ll stay synced whether they’re connected to the app or not.

Like I mentioned, the standard rental kit includes a 3.5mm to BNC cable to connect the Tentacle to any number of devices with a BNC timecode in/out. Pictured here is the Tentacle connected to a Zoom F8. In this configuration, you could either connect the Tentacle to the “IN” port on the F8 and use it as a timecode generator, or you could connect it to the “OUT” port and use the F8 as a generator, whichever works best for your workflow. If you’re using a camera without a BNC timecode port, though, you’re still covered because, ingeniously, the Tentacle Sync E is capable of outputting a timecode-like signal as audio over the included 3.5mm to 3.5mm cable. Pictured here is the Tentacle connected to a Panasonic S1H. 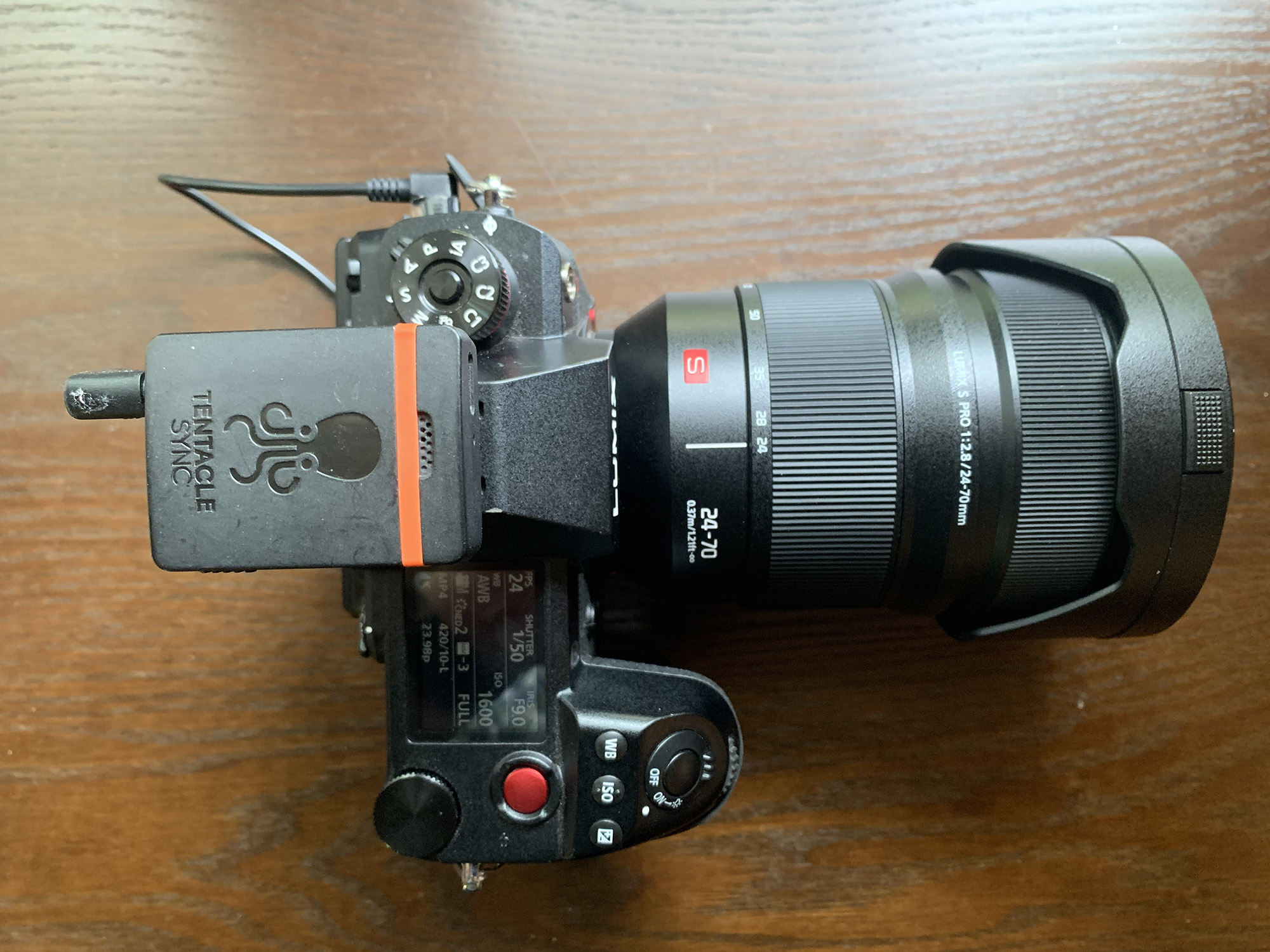 The 3.5mm cable is connected to the “MIC” port of the camera, exactly where I’d connect an external microphone. In fact, for this purpose, the Tentacle pretty much is an external microphone. Instead of sending actual external audio to the camera, though, it’s sending “timecode over audio” a proprietary audio signal that’s translated into timecode in post, a super clever workaround to make basically any camera with a 3.5mm input timecode capable. While this does take up your external mic input, that shouldn’t matter much to most users because, presumably, the reason you need timecode in the first place is that you’re recording two-system audio.

Tentacle’s Sync Studio software then converts the audio timecode signal to actual timecode, allowing you to either XML files or entirely new clips depending on your workflow. A minor quibble I have is that this software isn’t free. Any Tentacle Sync purchase does include a license, though, and there is a 7-day free trial. Also, any Tentacle, when plugged into a computer over USB-C, conveniently acts as a software activation dongle. So, if you rent a Tentacle, you’ll have access to the Studio software for as long as you have the device in hand, just another in a long list of customer-friendly design decisions. 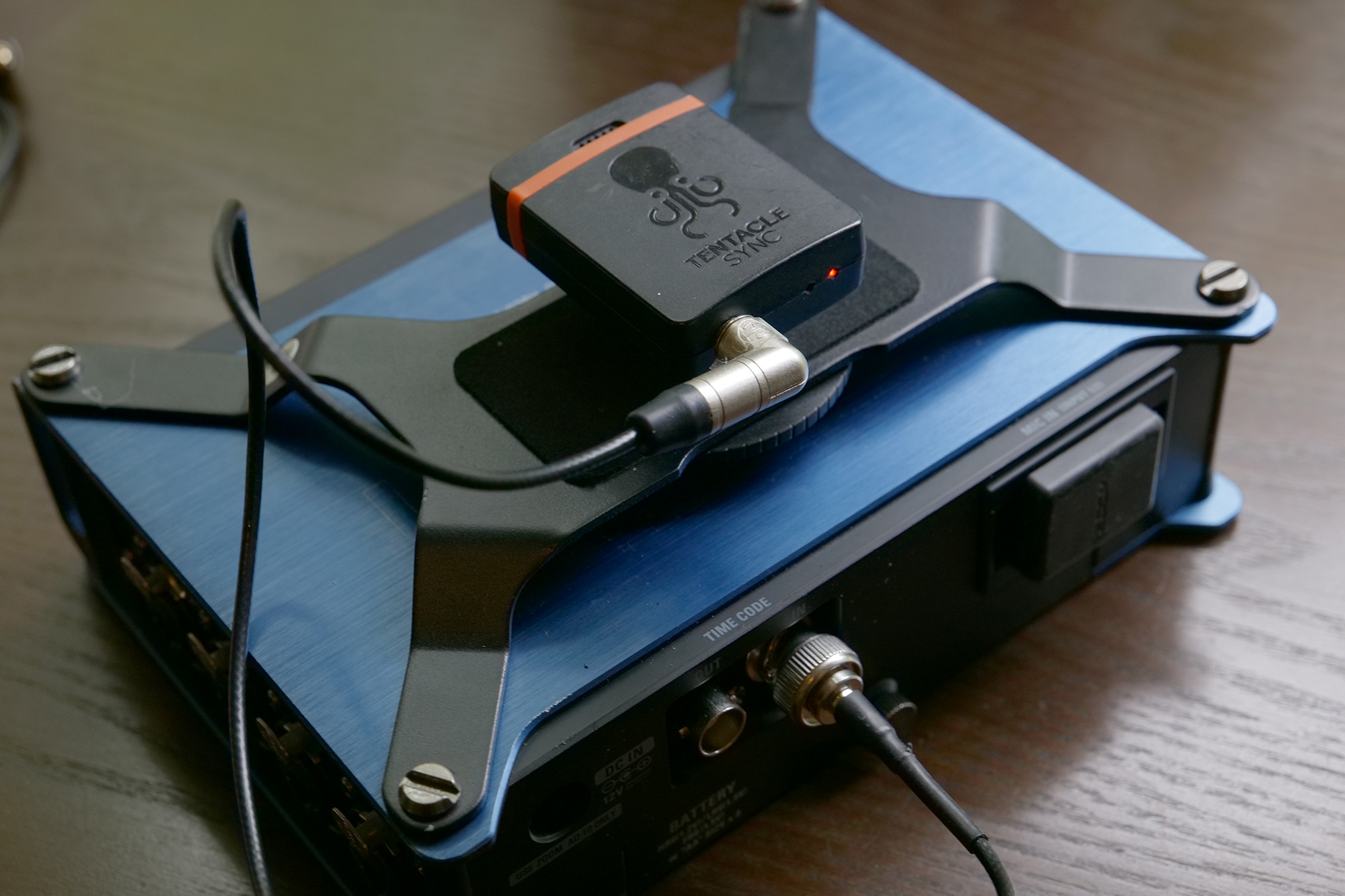 If you decide to purchase a Tentacle Sync E (rather than renting one from your friends at Lensrentals), you’ll find a feature list on their site. At the bottom, below the 35-hour runtime and 2-year warranty, the last feature reads “Designed and Made with Love in Cologne, Germany.” That’s an important bit of text for two reasons. First, I think it’s true. Clearly, a great deal of care went into this product. Second, though, and maybe more importantly, I think it says a lot that they chose to include that in the feature list. An equally important selling point as specs and price is the fact that this product was designed with a focus on the user experience by people who take genuine pride in their work. I wish more companies thought that way.