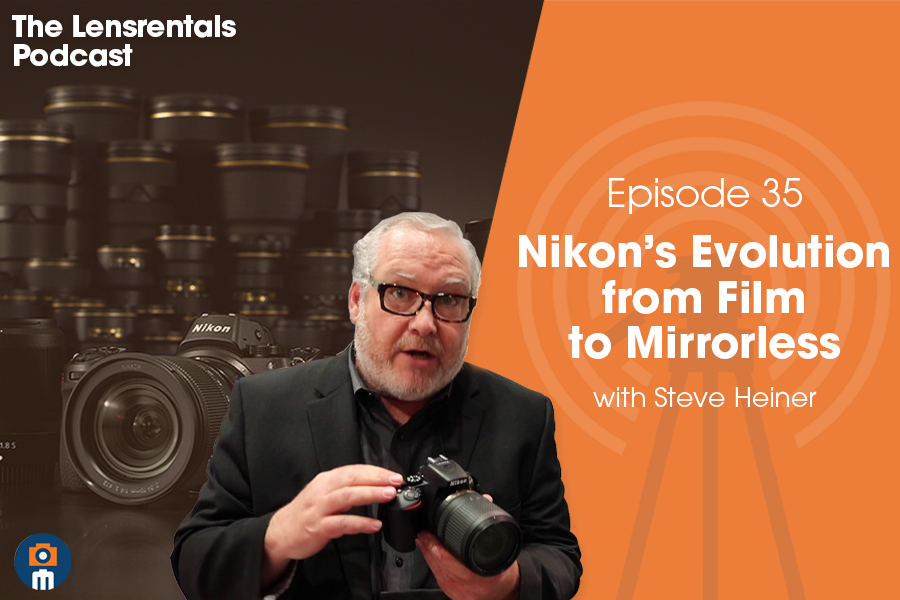 Nikon’s Evolution from Film to Mirrorless

Since the late 1940s, Nikon has been a staple within the photography industry. Starting with their series of rangefinder film cameras, all the way to the latest tech in mirrorless systems, Nikon has seen it all. So for this episode, we were so excited to have Roger and Joey sit down and talk with Steve Heiner, the Senior Technical Manager at Nikon. Steve Heiner has been with Nikon since 1985, and has seen a lot of changes in that time – from building the lineup of 35mm film cameras to transitioning into digital formats in the early 2000s.

In this episode, Steve Heiner talks about his experience working for Nikon over the last 35 years, some of his favorite lenses they’ve developed over that time, and how Nikon is making the push into video. Roger and Steve also spend some time geeking out about some of the more interesting lenses Nikon has developed over the years.

As for Lensrentals.com, we’ve had a long love affair with some of Nikon’s different products. From Zach’s love for the strange P1000 Super Zoom camera, to Joey’s Ode to the unique 105mm f/1.4E, Nikon has had a lot of unique and interesting products come out of the last few years. Most notably though, has been Nikon’s push into the mirrorless market, which Matthew Saville has done an extensive breakdown of in the past. Though mirrorless isn’t new to the photo market, and Roger has had a few hot takes when comparing the three top brands, mirrorless is the focus of Nikon for the next few years and hopes to take some of the market back from Sony and Canon, who is currently leading the charge with their mirrorless platforms.

00:40 – Roger and Joey are talking with Steve Heiner today. He is the Senior Technical Manager at Nikon, and has been with the company since 1985. Steve is also known as quite the Nikon collector and Roger and Joey have fun talking about his collection, standouts are a 50-300mm and an elusive f/1.2 50mm, and a 1200-1700mm that required 2 tripods!
6:15 – Steve has seen Nikon transition from the film era and through hybrid film/digital cameras, small compact cameras, and up to the Z system of today.
7:00 – Steve discusses the difference between the Z system and DSLR cameras like the D850.
9:00 – As people get older Steve has noticed it’s not that they don’t like their DSLR, it’s that a lighter option is easier to use. D5 and D6 still have an edge on the Z system in some areas though.
10:15 – The Nikon D5 and D6 still have an edge on the Z system in some areas though, especially for sports photographers. Steve and the whole Nikon team were excited to see the D6 be debuted at the 2020 Olympics, but alas that wasn’t meant to be.
11:30 – Nikon engineers paid attention as interest in video has grown and the demand for a camera that can produce both high-quality stills and video has risen.
12:40 – The Z6 and Z7 have been in the world for almost 2 years, believe it or not! The guys discuss Nikon’s recent offerings including the Z50 which is based on a DX-format, the Z5, and Z6II, and Z7II, and 15+ lenses.
14:05 – Roger’s heard a good deal of praise for a lens he’s surprised by, the 24-200mm, and wants to know more about it.
15:50 – Break
16:30 – The industry has been a bit chaotic over the last several years. Nikon has downsized, revamped, and brought out new products in the last few years, what has all of this been like from Steve’s perspective?
20:15 – Both Nikon and Steve are getting more into video, and that was born out of Nikon Professional Services where Steve worked at the time and the wire services of the day started to require their photographers to shoot snippets of video and the same high-quality stills with the same camera.
23:20 – Favorite lens time! Steve settles on a 14-24mm with its aperture and focal lengths not seen before, with honorable mention to many other lenses also.
25:35 – Roger puts Steve on the spot and asks, “What does Nikon do really well?”
28:00 – Joey wants to know what was Steve’s first film camera?