The Lensrentals Podcast Episode #55 – Battle of the Flagships: Canon R3 vs. Nikon Z9 vs. Sony A1 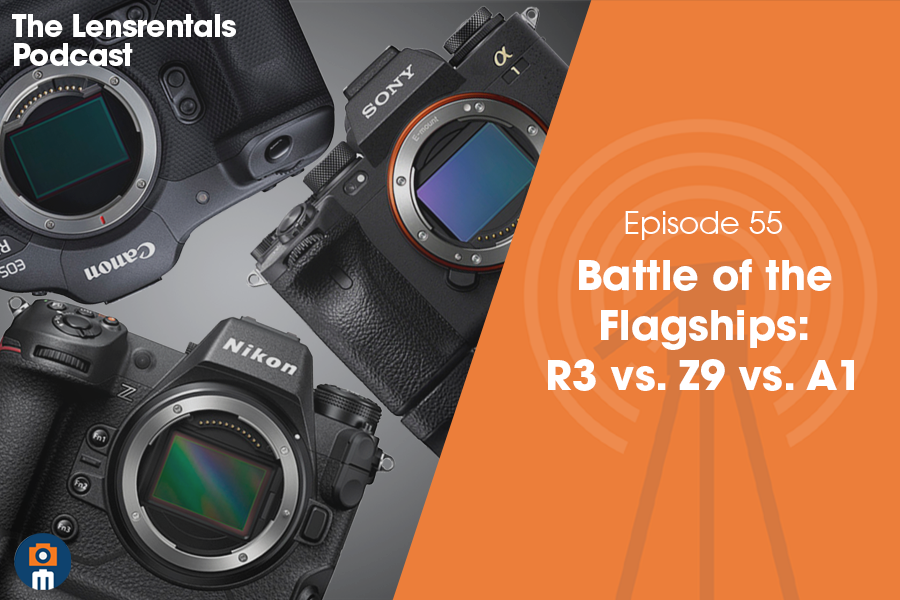 Battle of the Flagships: Canon R3 vs. Nikon Z9 vs. Sony A1

The Lensrentals Podcast is finally back, and today we’re tackling questions that many people have been wondering about – comparing the three latest flagships from the Canon, Nikon, and Sony. Join Ryan Hill, Joey Miller, and Zach Sutton as they walk through all the features of each camera, to determine which one is best for each use case.

Though the Canon R3 was released in late November, the Nikon Z9 was released in December, and the Sony A1 was released in early 2021, supply has been incredibly limited on all three systems. As such, many people haven’t had the opportunity to get the cameras in their hands, leaving us with a lot of questions. In this episode of the Lensrentals Podcast, listen in as we try to answer all your questions, and share our opinions on which one is our personal favorite.

In this slightly longer-than-usual episode, we cover a lot of topics on each of these cameras, and a lot of features. And while we deduct many of the specialties of each camera, such as Eye AF on the Canon R3, we can’t cover everything. So below is a table with some of the features worth highlighting.

Among some of the more interesting features discussed in this episode is Nikon’s use of an electronic shutter through its entire shutter speed range. Does this mean that its flash sync speed could be increased with a firmware update? Theoretically, yes…but it would also be dependent on the flash duration of each specific flash brand. We also discuss Canon’s incredible Eye AF system. Not to be confused with autofocus which detects the eye of your subject, Eye AF actually reads where your eye is looking in the viewfinder and tracks your eye to focus on specific objects and subjects. We can’t help but think this would be incredibly valuable when shooting high-speed subjects like sports or birding.

00:42 – Welcome back! We’ve been on a break for a while, so we’re worried we might be rusty.
3:15 – Joey has gotten some customer complaints about battery life on the R3, and he has some theories as to why that might be.
4:15 – The Nikon Z9 has some quirks as well, most notably a fully-electronic shutter. Later we’ll cover some of the differences between an electronic shutter and a mechanical shutter.
7:00 – The Canon R3 features a lower resolution than either the Nikon Z9 or the Sony A1. Joey talks about why that might be a pro rather than a con.
9:45 – Zach noticed that one of the major differences between these three cameras is the flash sync speed and discusses why that might be a deciding factor for photographers who use frequently use strobes.
12:15 – Joey and Zach cover the functional differences between a mechanical shutter and an electronic shutter.
15:15 – This is the first time in history that the flagship cameras from all three of these major manufacturers have been mirrorless. What does that mean for camera design in the future? Is there a reason at this point to invest in a traditional DSLR?
18:20 – Ryan was very impressed by the eye-controlled AF on the Canon R3, which could end up being the defining feature of that camera.
20:55 – Break
21:40 – All three of these cameras are at the absolute cutting edge of technology. All of them are incredibly capable, and they’re actually remarkably similar. Joey and Zach try to identify the standout characteristics that differentiate each model from the others.
26:35 – Which manufacturer currently has the best native lens lineup? And what lenses do we want to see released next?
34:50 – Ryan covers some of the video features on each of these three cameras. For many users, 8K might not actually be the most important spec.
37:00 – All of these cameras are so impressive and feature-rich that it’s tough to imagine where things go from here. What do we expect to see out of these kinds of flagship camera models in the coming years?
43:00 – Thanks for listening. The next episode of The Lensrentals Podcast will cover all the ins and outs of weather sealing. Roger and a special guest will talk about what works, what doesn’t, and what to avoid.