The Angelbird SDXC 128GB AV Pro UHS-II V90 is an ultra-fast memory card with a Video Speed Class of 90. Key features include:

Video Speed Class V90. With a minimum write speed of 90MB/s, this Angelbird memory card is ideal for the Panasonic GH5 and its 4:2:2,10-bit ALL-Intra video recording mode, meaning you can record 400 Mbps 4K files and 200 Mbps Full HD files directly to the card. Of course, this card works with a broad range of SDXC-compatible cameras.

Durable Construction. This memory card is shockproof, dustproof, and waterproof, and it has an operating temperature of -13° to 185°F. You can use it in the desert, in snow, or underwater. Even if your camera doesn’t survive, this card probably will. 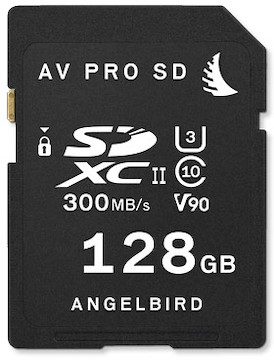