Dual UHS-II SD Slots. This recorder’s two UHS-II SD media slots give you the potential to record almost endlessly since recording seamlessly switches to the second SD slot once the first one fills up and the cards are hot swappable.

Video Signals. This recorder supports SD, HD, and 3G signals over SDI and HDMI. You get NTSC and PAL signals, 720 × 480p, and 720 × 576p support over HDMI, and 4K via 6G-SDI and HDMI. The built-in LCD on the front panel lets you monitor input and playback, in addition to timecode, format, and audio levels.

Intuitive Controls. You get VTR-style front-panel record and playback controls. The built-in control knob gives you analog-style control over playback. The buttons are illuminated, so you can easily work in low light. 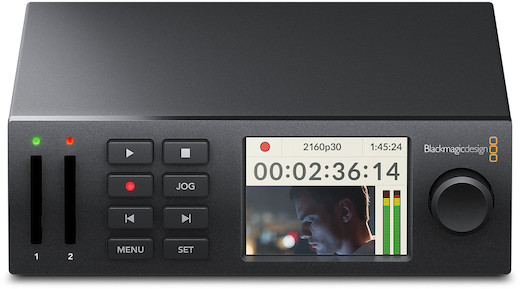