Sigma’s APO 200-500mm F2.8/400-1000mm F5.6 EX DG, is the first large-aperture ultra telephoto lens to have an F2.8 aperture at 500mm. With its specially designed attachment mounted becomes a 400-1000mm F5.6 ultra telephoto lens capable of auto-focus shooting. It has ELD (Extraordinary Low Dispersion) and SLD (Special Low Dispersion) glass for maximum correction of aberrations. Perfect fast moving nature subjects and sports such as surfing, polo and soccer and as it excels at tracking fast moving objects it is a great surveillance lens. Here, Sigma’s achievement is unsurpassed and stands alone.


OK, it’s really fun to joke about this big bad boy, and we’ve done that plenty. This is for people really considering this lens. There are some things you need to know. Weight Yes, we’ve all seen p...

OK, it’s really fun to joke about this big bad boy, and we’ve done that plenty. This is for people really considering this lens. There are some things you need to know.

Weight Yes, we’ve all seen pictures of people handholding this lens. It’s funny. But let’s get real. This lens weighs almost exactly the same as FOUR (4) Canon 400mm f/2.8 IS II lenses or SIX (6) Canon 500mm f/4 IS lenses. It takes a minimum of two people to mount this to a tripod or other support, and we really recommend 3 people.

Speaking of tripods and support, it’s too large to fit in a Wimberley or other Gimbal head and don’t even think about a ballhead. Some are rated high enough for the weight (although the ballhead manufacturer’s lie a lot) but they can’t hand weight this far out from the center. We recommend a large fluid-head and tripod like the Manfrotto 526B or a dedicated video dolly on rails.

Depth of Field is worth mentioning too. The lens is capable of focusing as close as 9 feet at 500mm. In case you wonder, that gives you a depth of field of 0.2 inches. Even at 25 feet the DOF is 3 inches. If you look at the example pictures we took at 50 feet, focusing on Kenny’s coffee cup left his face out of focus. The lens isn’t soft, it’s exceptionally sharp. But precise focusing is a must.

Once the lens is mounted on a fluid head, a single operator can usually handle panning just fine. Let me be clear — you aren’t going to grab birds in flight with this. Wildlife on the ground, sports, surveillance, etc. are practical subjects. I understand National Geographic has a couple of these and I can understand why.

Everything Else: The motorized zoom and focus are quick and smooth (manual focus is by-wire, the ring actuates the AF motor). They are fairly loud, though. You won’t want to be recording audio on the camera (I can’t imagine why anyone would be, but I guarantee if I don’t mention it someone will try). Oh, and speaking of motorized, the lens has it’s own battery and won’t work without it. We’ll include two batteries and a charger, but that isn’t going to last you for a week in the wilds. A method to recharge the batteries will be needed.

The sharpness at f/2.8 is exceptionally good; very close to what a telephoto prime can accomplish in the center, just a bit softer at the edges. (At 300mm, f/2.8, and 8 meters distance its MTF50 is identical to the Canon 300 f4 IS at f/4 — that’s a remarkable performance.) Sharpness seems better at f/4 by a hair, and the lens is sharper at longer distances, as one would expect. Background blur is nice a smooth and the 9-bladed aperture is truly circular.

The lens comes with a Sigma 2X teleconverter, allowing you to have a 400-1,000mm f/5.6 lens. Sharpness clearly falls off a bit with the 2X converter. You can also use the Canon 1.4X TCIII and 2X TCIII converters with the lens. We think both are a bit better than the included Sigma converter.

The truth is, this is a ‘corporate’ lens. I can’t see many individuals using it. A crew of 3 people (minimum 2) will be needed to handle it. But for certain production shoots, photo or video, this lens provides some things that just aren’t available in any other lens. 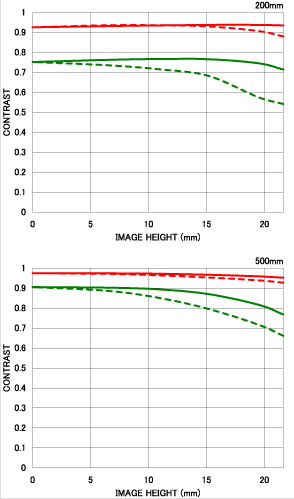