The Manfrotto 244RC Variable Friction Magic Arm is a fully articulating arm with quick-release system for mounting cameras and lights. Key features include:

Articulating Arm. With 90° pivotable and 360° rotatable ends, as well as 360º rotating elbow, the 244RC offers a wide range of flexibility. The “Magic Friction” knob allows precise positioning of light head or camera.

Requires Mounting Base. The 244RC is designed to be used in conjunction with a Manfrotto Super Clamp, Manfrotto Alu Ranker 9ft Air-Cushioned Stand, or other support system that accepts a 5/8" stud.

Quick-Release. The camera platform is based around the Manfrotto RC2 Quick Release system. The compact QR plate features a tool-less 1/4-20" mounting screw for easy attachment. 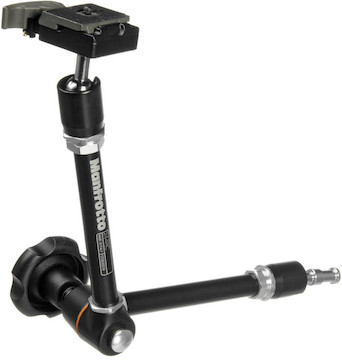