Lens Compatibility. The Speed Booster adapter allows you to use nearly any full-frame F-mount lens. This includes both G and non-G series Nikon lenses, as well as legacy non-AI and AI lenses. Nikon DX (crop-sensor) lenses won’t work with this adapter.

Camera Compatibility. This adapter allows you to use Nikon lenses on crop-frame Sony E-mount cameras and camcorders like the Sony a6300 and NEX-FS700R. This adapter doesn’t provide full-frame sensor coverage.

Wider Focal Length and Increased Aperture. By design, the Speed Booster widens the focal length of the lens mounted by 0.71x, effectively reducing the overall sensor crop factor from 1.5x to 1.07×. Additionally, the adapter increases the maximum aperture of the mounted lens by one stop.

Aperture Ring. The adapter has its own eight-stop aperture ring for controlling Nikon G-series lenses without their own aperture rings. Each stop is labeled, but the ring’s mechanical function is clickless. 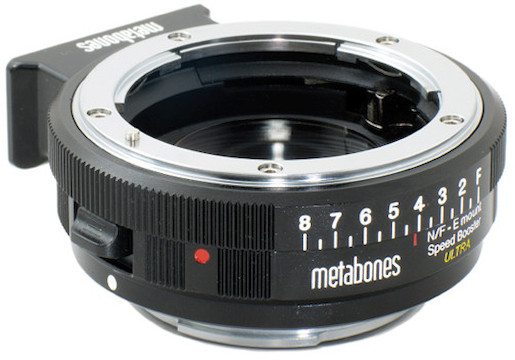