The Oculus Quest 2 is a high-quality, standalone VR headset with 6-degree motion tracking and wireless, motion-tracked Touch controllers. It’s an update to the Oculus Quest. Key features include:

What’s Changed? The Oculus Quest 2 Advanced All-in-One VR Headset (256GB) is an upgrade in nearly every specification from the previous Oculus Quest. Resolution per eye is up from 1,440 × 1,600 to 1832 × 1920 and the headset’s refresh rate is up from 75Hz to 90Hz. Both of these go a long way to make the VR experience more comfortable and enjoyable. There are some negative changes. The display has been changed from OLED to LED with a slight loss in contrast, and the headset now requires a facebook account to function. Overall, it’s a nice improvement on an already great VR headset.

A PC Free Experience. The Oculus Quest 2 offers most of the features of the previously PC-tethered Oculus Rift and Rift S without needing the PC. The standalone VR headset provides 1832 × 1920 resolution to each eye with a powerful, integrated Snapdragon XR2 processor and 6GB of RAM.

Look Ma, Hands! The headset is capable of 6-degree motion tracking and comes with two wireless Touch controllers for manipulating the virtual world. If you’ve never seen your hands virtually tracked in real time, the experience is worth the Quest’s price of admission all on its own.

Internal Memory. This rental is for the larger 256GB version of the Oculus Quest 2, so you’ll have plenty of room for installing apps and media to the device.

Room-Scale VR. The Quest 2 is capable of using large spaces for full room scale games and applications. The best part is that it accomplishes this without the need for separate sensors and the wires that accompany them.

Mobile Device & Facebook Account Required. Set up will require an iPhone or Android mobile device and a download of the free Oculus App. A facebook account will be required to log in. While we’re on the topic of things you’ll need, have two AA batteries on hand for powering the Touch controllers.

Other Notable Features. This headset offers built-in speakers at each ear, but for an optimal experience, you’ll likely want a pair of headphones with an 1/8" connector. The Quest 2 offers digital IPD adjustment to dial the display into the width of your eyes. This headset is compatible with Matterport VR software (separate purchase required) for viewing Matterport media files 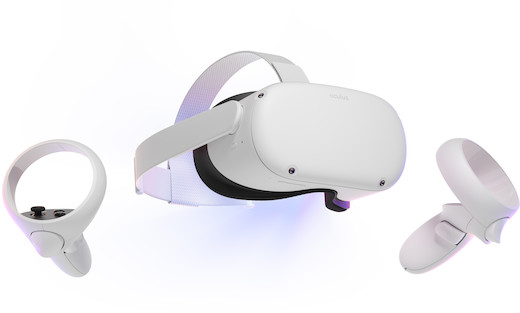 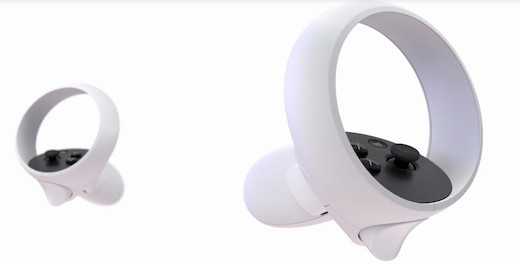 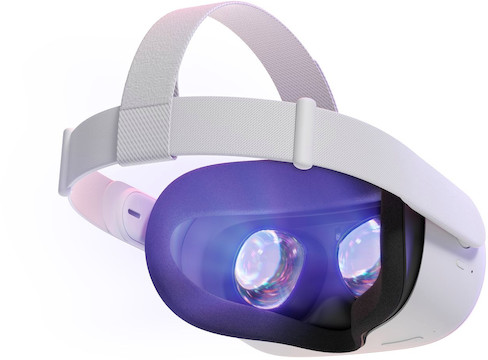