16MP Live MOS Sensor. This 4/3 sensor uses the TruePic VII Image Processor to reduce noise levels across the normal ISO 200-3200 range. Additionally, the processor has been tweaked for excellent continuous shooting performance, reaching 10 fps (with a fixed focus point) or 5 fps (with autofocus).

Five-Axis VCM Image Stabilization. The original E-M5 was the first Olympus camera to feature their now-renowned five-axis in-camera stabilization, and the EM5 II builds on it. This new system offers up to five stops of correction, with greatly improved performance during video recording. There’s also that little high-res mode…

40MP Multi-Exposure Mode. This camera uses its image-stabilization system to essentially shoot eight images over the span of one second and then combines these images into a single 40MP image. Since your photo’s composited from multiple images, any movement will mess it up, so both you and your subject will need to be completely still. In other words, use a tripod and don’t try to shoot your two-year-old.

Viewing Methods. The E-M5 II employs the fantastic 2,360k-dot electronic viewfinder from the flagship E-M1, meaning that you get 1.48x magnification with 100% coverage. If you’re shooting from a tripod or arm’s reach, the swap to a fully articulating 3.0" touchscreen rear LCD is sure to make you happy. While the tilting rear LCDs in all of the previous OM-D cameras were decent, they just don’t compare to an articulating version.

Build and Ergonomics. The weather-sealed, magnesium-alloy body makes this camera a workhorse for all types of shooting. Button and dial placement has been refined, providing a more comfortable layout with even more customization than the E-M5. The E-M5 II’s physical size is quite similar to its predecessor’s, with the removal of the accessory port causing a slight height reduction. It’s not a major advertised feature, but the included accessory flash has been substantially improved, and now features a bounceable/rotating head.

Other Notable Features. The built-in Wi-Fi from the E-M1/E-M10 has made its way to the E-M5 II, allowing wireless image transfer and camera control via smartphones and computers. There’s a silent electronic shutter mode that enables a 1/16,000 sec. maximum shutter speed when engaged (1/8,000 sec. normally). The camera still records images and video to SD memory cards, but the battery life sees a slight dip to 310 shots per charge using the same BLN-1 model. 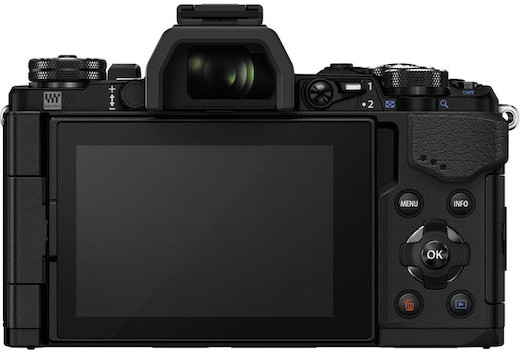 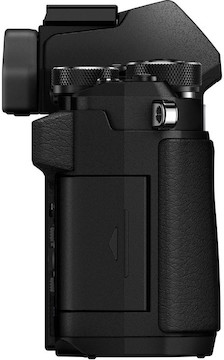