The Ricoh THETA X 360° Camera is a compact, two-lens, 360-degree camera and a user-friendly update to the Ricoh THETA Z1. Key features include:

Compact 5.7K 360° Camera. This camera boasts twin 48MP CMOS sensors and two wide-angle lenses that let you record up to 5760 × 2880 5.7K video at 30 fps, livestream up to 4K video at 30 fps in AVCH/H.264, and capture up to 60MP stills in EXIF or JPEG. The camera captures two wide-angle images and automatically stitches them together into a single image in real time using a revised processing algorithm. Automatic dynamic-range compensation minimizes blown-out highlights and increases details in shadowy areas.

Dual-Lens Optical Design. Each of the THETA X’s two wide-angle lenses has a fixed f/2.4 aperture and a seven-group/seven-element optical design that helps combat ghosting, flares, and fringing for maximum accuracy.

Other Notable Features. An improved image-stabilization system smooths out the action in your videos at rates up to 5.7K 30 fps, and there’s a built-in mic for audio capture. You also get a range of exposure-control and capture modes. Bluetooth connectivity no longer requires you to enter an SSID during setup, which is a serious time-saver. The THETA+ app for iOS and Android lets you edit your photos and video, and internal Multiple Input Multiple Output antennas rapidly transfer images to your phone. 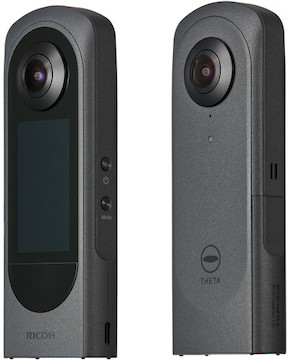 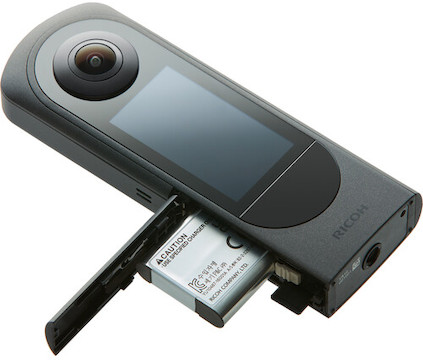