The ARRI WVT-1 Transmitter & WVR-1 Receiver Wireless Video Kit is an SDI-compatible, long-range, zero delay, wireless video system rated for a range of up to 2000’. Key features include:

Expandable 1:1 Kit. This kit includes a single receiver and transmitter but supports multicasting to as many as four WVR-1 receivers from a single WVT-1. Pairing is easy using the dedicated buttons and on-board LED indicator lights communicate signal and network information without the need for an OSD.

Robust Build, . The WVR-1 and WVT-1 are housed in rugged aluminum that is both spray and dust resistant and all ports and antenna posts are collared to protect against damage during demanding production work. Both devices have built-in 1/4"-20 mounting insets and include additional hardware for mounting to ARRI standard 3/8"-16 support accessories and light stands.

Other Notable Features. In addition to the SDI input, the WVT-1 comes equipped with an SDI loop-out for on-camera monitoring. We’ve added a d-tap cable for powering from common power tap sources. The WVR-1 supports two simultaneous SDI output feeds via dual BNC connectors and can power compatible accessories from its 12V 2A 2-pin LEMO power output using the included accessory cable. We include an AC adapter for the receiver and a 24V 3-pin Fischer M-F cable for power and R/S control. 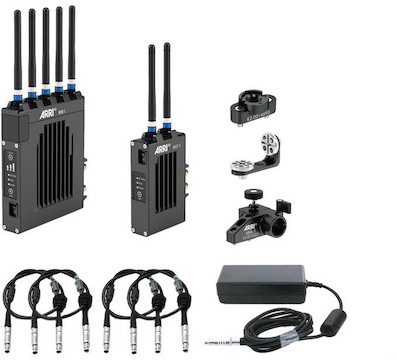