The SanDisk 128GB Extreme Pro 95MB/s UHS-1 U3 SDXC is a SD memory card that’s designed for capturing both still and video files. We also offer a 170MB/s version of this card. Key features include:

Known Compatibility Issues. Not all cameras support SDXC memory. The most notable cameras that have widely reported issues are Pentax’s 645D / 645Z and Leica’s M-E / M Monochrom / M Monochrom – Typ 246. Additionally, there have been reports of compatibility issues involving memory cards with a speed class of V30 or higher and first generation Blackmagic cameras such as the Blackmagic Pocket Cinema Camera and the Blackmagic Design Micro Cinema Camera. 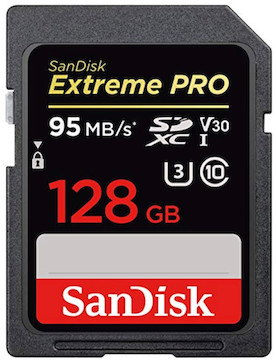