SDI and HDMI Output. This kit can output SDI and HDMI with cross conversion of the two from a transmitter. Dual SDI outputs on the receiver provide more options for viewing the transmitted image.

1080/60p Wireless Monitoring. The transmitter offers support for uncompressed 10-bit 4:2:2 1080p video at up to 60 frames per second. Teradek states that line-of-sight transmission is up to 1000 feet without break-up or image degradation with less than 1ms latency. If you lose the signal, the Bolt 1000 XT will automatically reconnect once you move back into range. For 4K capability check out the Teradek Bolt 4K 750 12G-SDI/HDMI Gold Mount Receiver. 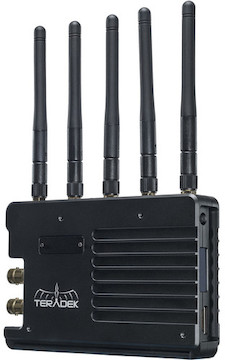