Gear Up for Vacation!

One of the things that is often great (but sometimes terrible) about working at Lensrentals is that you get to talk to lots of photographers all across the country.

This time of year, we get tons of phone calls asking for gear recommendations for the big summer vacation. Sadly, we also get a few post-vacation phone calls from customers, where they tell us what they wish they had known before heading out for their trips.

We’ve gotten Tim and Roger to pool their collective knowledge on what they feel are some things you really should consider before your next trip. The items they are recommending today are not all the most popular items to rent, in fact most of these items are often overlooked for vacation use.

So before you board that cruise ship, safari tour jeep, or station wagon for the wildest 17-hour drive of your life to visit the Corn Palace, let us help you pick the right gear! 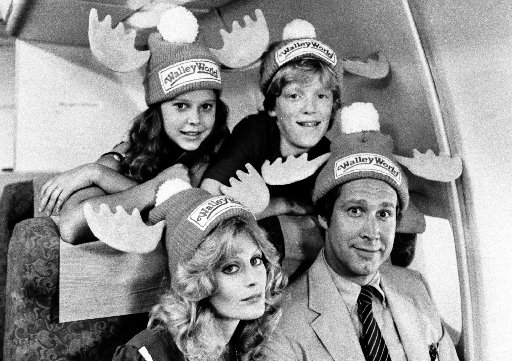 We’ve had almost 20 customers who have gone on African safaris and come home with no pictures because their own camera broke on day one or two. That’s why we say have a small, light back-up camera body (that’s not your cell phone). 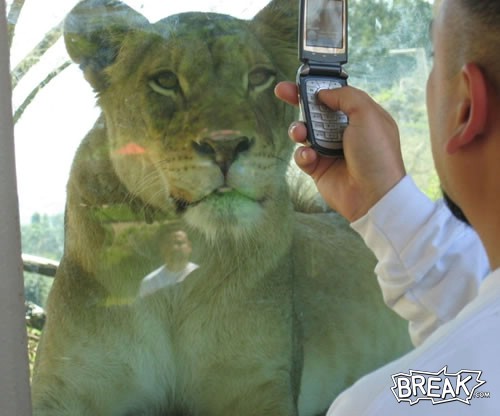 Make sure you get a back-up body that is compatible with your existing lenses (and, hey, if you’re not sure about this part, just let us know which lenses you want to take on your vacation with your rented camera body, and we’ll make sure everything will work together.).

Most people want to travel fairly light. As far as lightweight vacation lenses go, the Canon 24-105mm f/4L IS is both Tim’s and Roger’s personal favorite. Roger pretty well doesn’t leave home without it—or rather, when he does leave home, he doesn’t leave without it. It’s just so useful, and it’s so nice to have one lens that does most things.

Many people have a tough time choosing between this lens and the Canon 24-70mm f/2.8L. It’s true, they’re both great lenses!  But when it comes to vacations, Roger always goes with the  Canon 24-105 f/4L IS. Just look at the advantages—smaller size, greater range and image stabilization—all of which make it perfect for walking around or taking on vacation.

If you plan on renting this lens, though, consider this: it’s pretty wide on a full-frame camera. But if you are shooting with a crop-frame camera, this is not a very wide lens. You should think about taking a Canon EF-S 10-22mm f/2.5-4.5 to go with it. Or, as Tim suggests, you could rent the Canon EF-S 15-85mm f/3.5-5.6 IS USM by itself, since it’s a wide lens that is better suited for a crop-frame camera.

On every vacation there are going to be times that you are inside, where the lighting is poor. This is when you need a wide aperture lens. And again, you’ll want something lightweight like the Canon 50mm f/1.4 or Nikon 50mm f/1.4G AF-S. These are both great lenses for vacation since they’ve got faster apertures for indoor shots and night shots of the city. 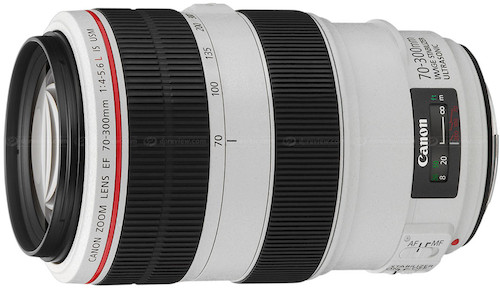 If you are thinking safari this summer, then go with Sigma 50-500mm HSM OS (for Canon, Nikon, or Sony). It is a great range, nice and sharp, and with optical stabilization can be handheld . . . for a while anyway.

Another note on safaris: Roger will tell you that there is nothing like having one lens-camera combination around your neck and another at your side if you need it. So if that giraffe you are shooting half a mile away is one thing and suddenly there’s a lion 50 yards away, you can change lenses real quick. That’s a really cool thing to have (or, if you are going somewhere that your tripod rig might get eaten by a bear, you’ll have the second camera around your neck to take pictures of the carnage).

It’s also a really cool thing to have on “civilized” vacations, like when you are taking pictures of your family making sand castles and then see the most ridiculous tan line/swimsuit combo on the other end of the beach (and you don’t want to get caught lookin’).

Tim emphasizes this the most. He’s done the whole mega-backpack loaded down with equipment on vacations. But nowadays he just wants the lightest, most convenient way to go (not the highest quality). After all, he says the majority of the pictures he takes on vacation aren’t meant for blowing up on the wall—most of the time it’s just a 8×10 frame or going on Facebook.

The Fuji X10 and Canon Powershot G1 X (like their Canon Powershot G12 but fancier) are both good walk around city/wilderness cameras. Both are fairly small in size and even have zoom lenses! The Nikon 1 V1 or Nikon 1 J1 are somewhere between a Canon Rebel camera and a point-and-shoot. Image quality-wise, they are closer to a Canon Rebel, but you have about the same control as a point-and-shoot. Bottom line: they’re easy to use and easy to print a quality 8×10 phot0.

The Canon Powershot D20 Underwater Camera is a fun alternative if you are going to be near water. If you have never taken your SLR to the beach, you don’t realize what an incredible pain it is trying to change lenses and keep your camera dry and sand-free. It’s worrisome.

Still take an SLR on vacation, but on the beach itself take the Canon Powershot D20 Underwater Camera. Jump in the pool with it, take underwater pictures of the kids playing, go out on a boat, go snorkeling—you can do all of that without having to fuss with an SLR. It’s still not going to have nearly the image quality of an SLR, but it’s great for JPEGs online or a 4×6 print for a little frame. 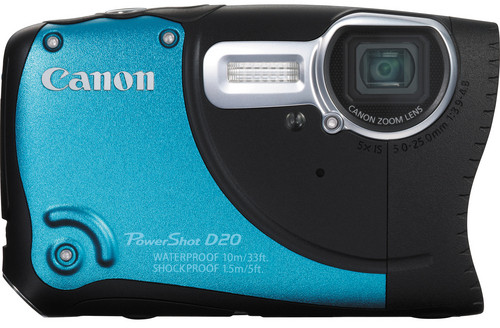 Another wonderful thing is that it fits in your pocket. Roger says there have been many times he and the family have gone out to a restaurant and taken the D20 because nobody wanted to carry the big cameras.

Tim thinks this is a strange idea. He says leave the underwater camera for well, the water, not the restaurant. Take the good walking-around camera for that instead.

Listen up though, divers: if you are diving and are trying to get really good pictures, it’s worth bringing out the big guns like the Sea&Sea DX-1G or DX-2G Underwater Kit (consider them interchangeable) and a Sea&Sea YS-110 Underwater Strobe Kit.  Flash underwater doesn’t work the same way that it does above water, and the little bitty flash on cameras like the Canon Powershot D20 would only be enough to light up to three feet in front of you.

And, no, we don’t rent underwater housing: their failure rate is low but it’s real, and there is no hope for your camera if the housing does so happen to leak on you. Not to mention there’s really not a good way for us to test the housings at 200 feet to see if they’re working properly. So, unless you can afford to replace the camera you’ll put in it, please don’t do it. Roger tears up just thinking about it—all those beautiful SLRs that were never even given a chance. 🙁 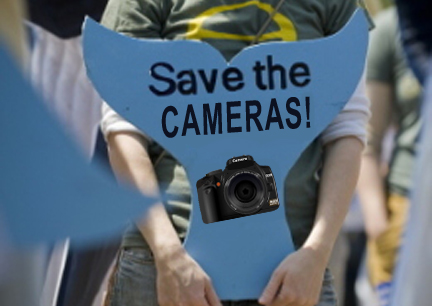 There are two really opposite reasons you will want a flash on your vacation:

We suggest the Canon Speedlite 430EX II or Nikon SB-700 Speedlight—both are small but still quite powerful.

The lens people usually forget is ultra-wide angle. When you go on vacation, there is usually beautiful, huge scenery that you can’t capture with a regular lens, and you need something really wide. Roger says if you take one, it will only be 10 percent of the pictures you bring home, but it will probably be your favorite 10 percent.

For Tim, it’s simple: the Tokina 11-16mm f/2.8 (for Canon or Nikon) is the ultra-wide angle of choice. Roger, of course, rambles on this subject. 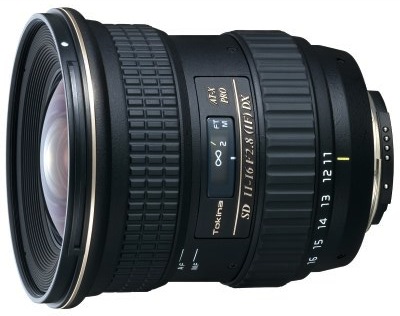 If shooting with a full-frame camera, it’s a different story; there just isn’t as good of a selection of ultra-wide angle lenses. For Canon, there’s the Canon 16-35mm f/2.8L II. For Nikon, the 14-24mm f/2.8 ED is the best, but the 16-35mm f/4 VR is what Roger usually takes. It’s nearly as good, a lot smaller and has vibration reduction.

Small enough to tuck anywhere. Great for landscapes. It’ll let you get sunsets, the night sky, the lights of the city, and self-portraits. One year, Roger even set up a  tripod in the corner of a room and set the camera to take a picture every 30 seconds. They’d play games, sit around and talk, eat, so on. Those were some of everyone’s favorite photos of the trip because of how candid they were.

Roger says you only need a tripod if one of the main purposes of the trip is to take photographs. If you are looking to just document a vacation, a tripod isn’t necessary. 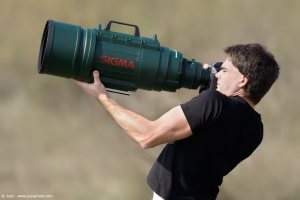 You also don't need a tripod if you're this guy. Photo credit: Juzaphoto.com.

As far as picking which one, the Benro Ultra Light is the best choice. It’s super cheap and (of course) lightweight. The Gitzo Traveler Ultralight is awesome, but it’s twice as expensive and only a half pound lighter. The Giottos Compact Tripod/Monopod is another great, much more cost effective choice than the Gitzo.

When you need the stability of a tripod, but you don’t want to carry the thing around, a Gorillapod is a fun, convenient alternative. They’re much smaller, lightweight, more compact and can fix on to pretty much anything with their bendable legs. Just make sure to get the right size: for point-and-shoot cameras you’ll need a large, and for SLR-size cameras you’ll need an extra-large. Roger LOVES Gorillapods. 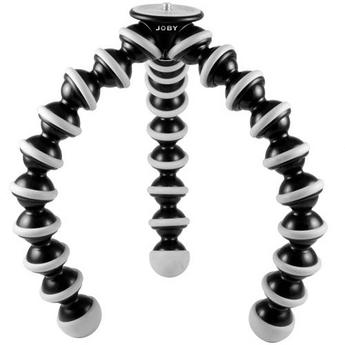 Extra batteries and memory cards are always a great idea for vacation. And you should always always take something to back up your photos. Whether it’s your laptop/ iPad and a card reader or several smaller memory cards (like four 8G, instead of one 32G), you will thank yourself later.

And don’t be that person who gets all this sweet gear and then leaves it in your hotel room the entire trip because it’s “too much” to walk around with. If you are really going to carry camera equipment around all day, a backpack makes that much easier.

Roger advises to take the backpack that fits your spouse, not you, so he/she has to carry all the stuff. Roger has a backpack that is slightly too small for him, and he travels (well his wife, Erin, travels) with that all the time.

Our last recommendation is the GoPro HD HERO2 Action Cam! 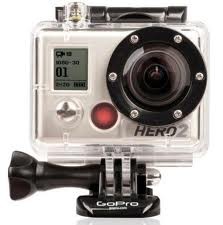 There are all sorts of mounts for whatever adventure you want to take this baby on from chest harnesses to handlebar mounts.

If you are going somewhere cool and you are going to be doing active things, the Go Pro is a great idea. If you’re going on a cruise, you don’t need a Go Pro. Well, we guess it depends on what you are going on the cruise for, but there are probably some cruises that we don’t really want to know about…

We advise that this item is mostly for vacationers under 30, who think heli-snowboarding and mountain climbing are relaxing. Once you get over 30, and your ideal vacation consists of sitting, sleeping, eating, and muttering the simple command “beer!” video documentation isn’t all that important 🙂

Whatever you do with your summer, enjoy it! And if you need anymore help figuring out what to take on your trips, just let us know. We are always more than happy to help you out!

Tweet
Posted in Equipment
Canon 40mm Pancake – How Did They Do That??
Guest Blogger Aaron Nace | How to Capture the Real & Surreal with a Superlative Lens