I tend to not get overly excited about new releases. The last few years have seen a lot of incremental upgrades that rarely blow me away. Usually, I end up thinking the new version of whatever is better than the last version. Not “rush out to the store and buy it” better, but “consider upgrading if you use it a lot” better.

Canon, though, (and Sigma) have hit some real home runs with optics lately, so I was a bit excited when Canon decided to upgrade one of their weaker lenses, the 16-35mm f/2.8, to a Mark III version. And if you don’t want to read the article I’ll summarize: rush out to the store and buy it.

As always, this isn’t a full review; that isn’t what I do. This is optical bench tests. Usually, I say stuff like ‘wait until the reviewers tell you how good it handles, and focuses and what the bokeh is like’ before you decide if it’s a good lens. Not this time. Optically this is such a big improvement that you just need to get it. If there are problems with that other stuff, then learn to deal with them.

Markus has made me a shiny new software tool that makes it easy for me to compare MTF curves between one lens and another, so I’m going to play with that for this post. As always, if you don’t speak MTF higher is better; dotted and solid lines of the same color close together is better; and on the horizontal axis “0” is the center of the image and “20” is very close to the corner. The rest is details. 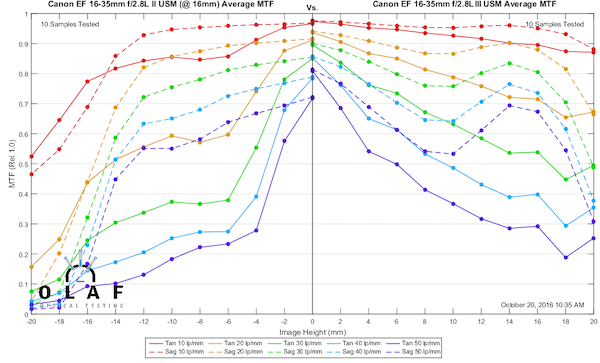 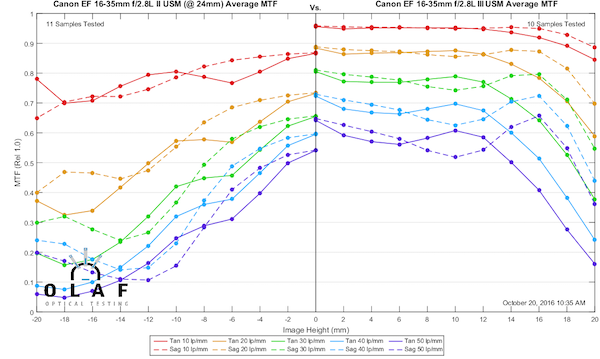 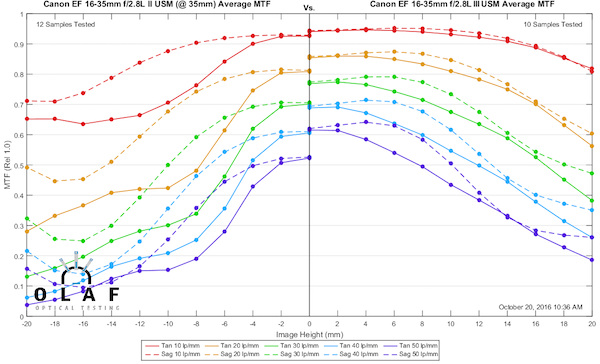 At all focal lengths, the Mk III is clearly better than the Mk II both in center and off-axis sharpness. It also has far less astigmatism at both ends of the zoom range. This isn’t close at all. It’s a dramatic, easy-to-tell-in-your-photograph difference. The mark III version is dramatically better. 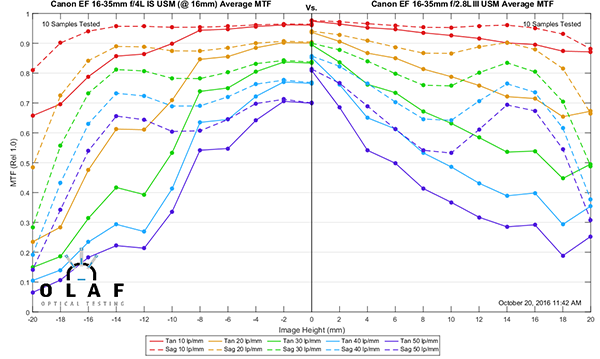 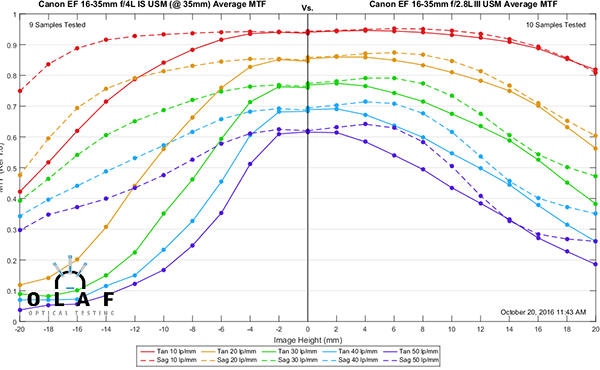 Giving up a stop of aperture is a huge disadvantage for MTF testing, but despite that, the 16-35mm f/2.8 Mk III is slightly better at f/2.8 than the 16-35mm f/4 IS is at f/4. There’s not a lot of difference, obviously, and I wouldn’t choose the f/2.8 Mk III purely on the basis of sharpness; the f/4 is less expensive and has IS. But if you need f/2.8, then there’s no sharpness penalty for going with the wider aperture lens.

The 16-35mm has been considered the weakest of the modern Canon zooms for some time. If I had an option for another lens, I generally went with the other lens. This comparison is one that I was really interested in since I tended to use the 16-35mm as a 16-22mm really and changed to a 24-70mm zoom whenever I could. The Canon 24-70mm f/2.8 Mk II is about as good as we see in a standard range zoom so I didn’t expect the 16-35mm Mk III would be as good but thought it might be reasonably close. 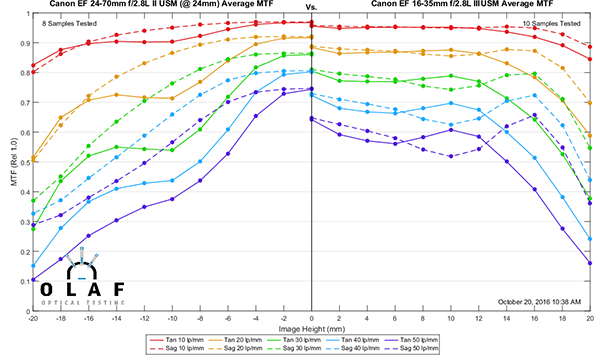 The 24-70mm is, indeed, a bit sharper in the center. As we go away from the center, though, the 16-35mm actually is better by the middle of the frame. It might well be the better landscape/architectural lens at 24mm. I’m pretty surprised by this.

I hesitated to make this comparison, first because I know fanboys are going to start screaming online about it, and second because these aren’t really zooms of the same range. This is the middle of the Canon range but the extreme end of the Nikon. But for years now, the Nikon 14-24mm f/2.8 has been the gold standard of wide angle zooms and I was interested to see if Canon had finally caught up. They’ve done better than catch up. 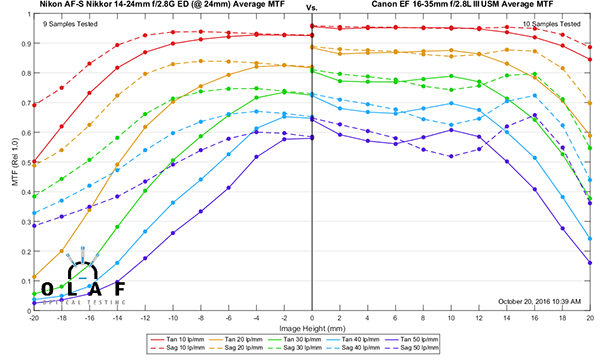 I can keep doing comparisons for pages, but the bottom line is clear. From an MTF standpoint, the Canon 16-35 f/2.8 Mk III is the best f/2.8 wide-angle zoom I’ve ever tested.

The sample variation for wide-angle zooms is usually pretty significant, but the new 16-35mm f/2.8 Mk III keeps that under pretty good control. Below are the variation spreads at 3 focal lengths (most zooms have one focal length at which variation is highest). 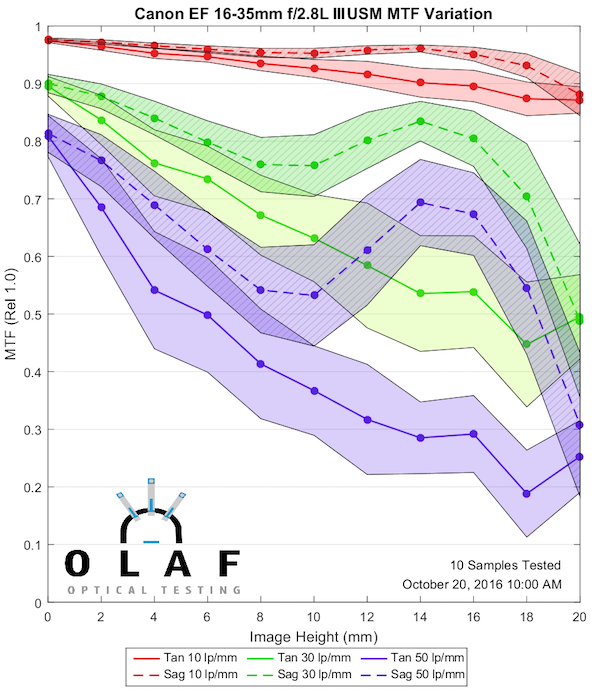 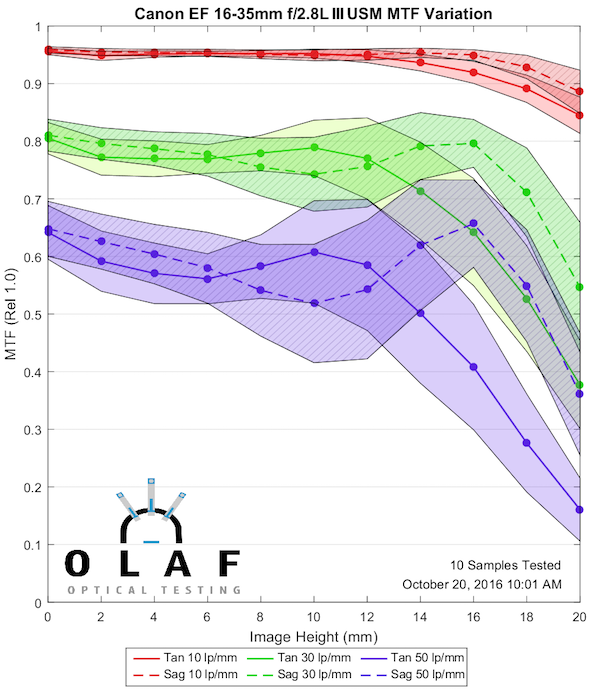 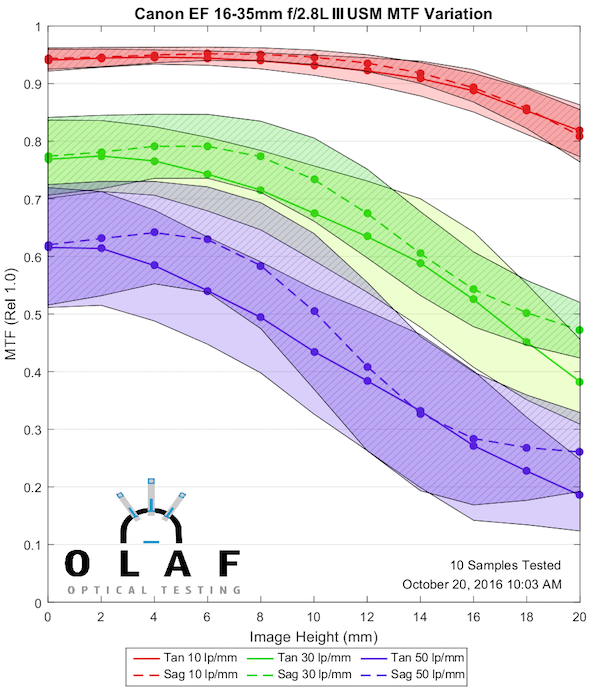 The copy-to-copy variation for this lens is quite reasonable, but if you see it in your copy you’ll probably notice it at 35mm. Still, it clearly has less variation than the 16-35mm Mk II.

This summary is quick and simple. From a resolution standpoint, the Canon 16-35mm f/2.8 Mk III is the best f/2.8 wide-angle zoom available. You might be better served with the f/4 IS and some money in your pocket. There are also some very good wide-angle f/2.8 zooms available from third party manufacturers that are a lot less expensive and might offer more bang-for-the-buck. But if your style of photography needs the highest resolution you can get with a wide-angle lens, well this is it. I don’t use a wide-angle zoom all that often, but when I do, it will be this one.

Addendum: A few Nikonians are upset because I only showed their favorite lens at 24mm, not 14mm where it is best (and they are correct, that is where it is best) I’ve posted the Canon at 16mm vs Nikon at 14mm comparison below. And because I know it’s coming next, I don’t have the Nikon measured at 16mm, but at 18mm, where I do have data, it is not as good as it is at 14mm. 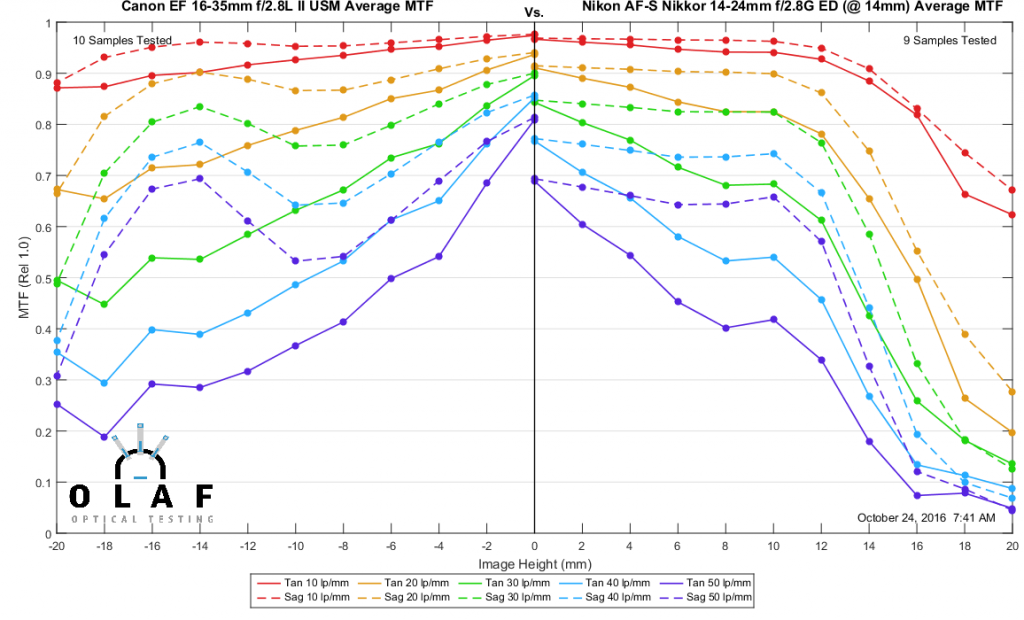 Tweet
Posted in Geek Articles
A Guide on What to Bring for a Landscape Photography Excursion
Nikon 105mm f/1.4E: An Ode to Nikon’s Best Lens