My Not Quite Complete Protective Filter Article 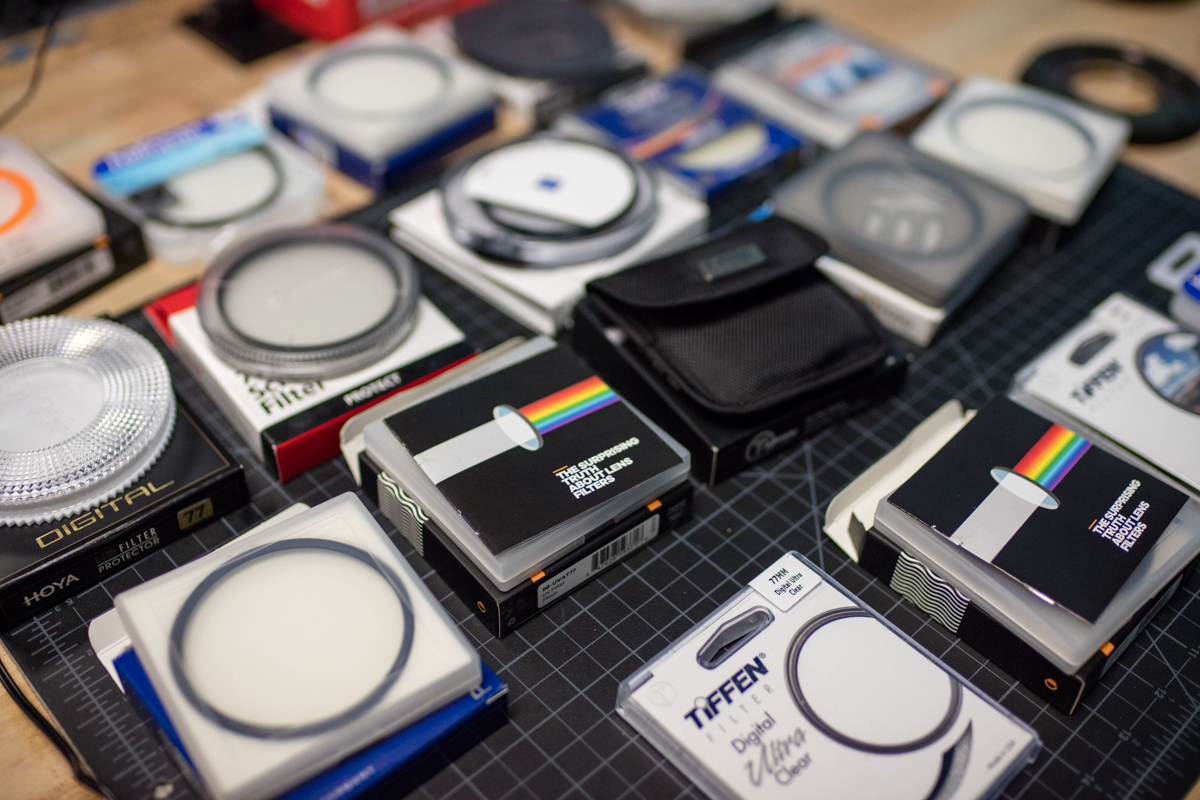 Because no good deed goes unpunished, the result of all this has been about 762 emails asking if this filter was better than this other filter. I answered most with I don’t know for sure because I don’t test filters and, of course, everyone asked me to test filters. To which I said no. Life is too short.

Then Brandon, who sort of works for me, emailed and said he could build a gadget to measure transmission and polarization through filters if I wanted to start testing filters. I told him I’d get around to it some day. Then he said it would have lasers. Someday became right-damn-now; because of lasers. We’ve got lots of cool toys at Olaf and Lensrentals, but no lasers. 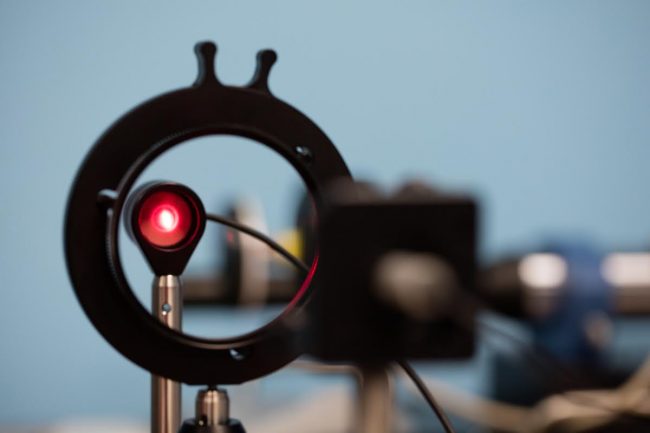 I like to keep these articles, well, no geekier than they just have to be. But I also want our methods to be transparent. So I’m going to give an overview of methodology in the article and put the geekier stuff in a methodology addendum at the bottom.

OK, everybody should know this by now. Plain uncoated glass passes through about 96% of light and reflects back 4%. It does this at both surfaces so if you shine a light through a flat piece of uncoated glass, about 92% of the light passes through. The rest reflects hither and yon. (Yes, I know there will be an argument in the comments telling me ‘hither and thither’ is actually the correct verbiage. But ‘yon’ which is the contraction of ‘yonder’ actually means ‘some distance away, but still within sight’ whereas ‘thither’ means ‘in that direction.’ Scattered light isn’t in a particular direction. So, there’s a thing you know now.)

We are aware that coated glass passes through a lot more light, but how much more varies, depending on the coating. Some manufacturers state the transmission on the filters you buy; most don’t. Even when they do state it, well, I don’t trust anybody anyway. So we set up a relatively simple experiment to test transmission ourselves.

We aimed a collimated laser diode (635nm wavelength) at an optical power (brightness) meter in a dark room. First, we measured the background light. Then we turned on the laser and took multiple readings of its power (brightness) to measure the strength of the laser’s light. Then we placed one of the filters in a self-centering mount in the beam path and repeated the measurement. We repeated this process several times for each filter, and for way too many filters. 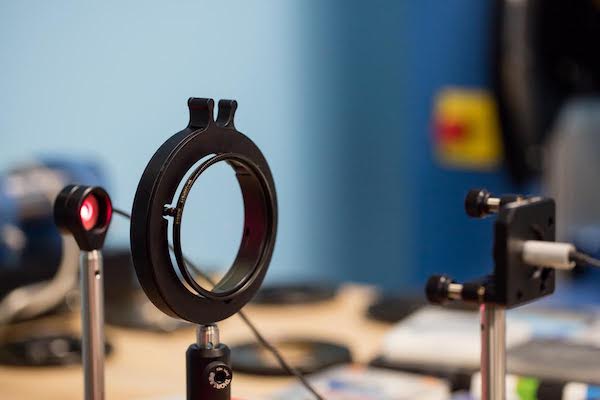 Simple transmission measurement with a laser (right) shining through a filter to a power meter (left).

You can sort the table and play with it if you want. There are a couple of things worth noting. First, I don’t see any increased transmission with clear filters compared to UV filters. Second, our measurements are reasonably consistent with the manufacturer’s claims (for those manufacturer’s that make claims). Several filters transmitted light better than the manufacturer claimed. Only one (B&W UV Haze) was lower than claimed, and this may be because it was the only ‘UV Haze’ filter tested. It may have been designed to tune out light at the wavelength of our laser. There were several ‘reasonably priced’ filters that had a very good transmission.

You may think that a 1% difference in transmission is not a big deal. What is a big deal, though, is that the light that’s not transmitted is being reflected. Reflections can cause ghosting, glare, and decreased contrast and it is a big deal. To emphasize this point, I’ll repeat the table, but this time shows the percent of the light that DOESN’T transmit through the filter.

You can determine what you want to call acceptable and not acceptable. To me, there’s a very obvious break between filters that reflect about 0.5% or less and those that reflect 1.3% or more. There’s another big gap between the three filters at the bottom of the list and everything else. Whether the difference between, say 0.3% and 0.5% is significant I don’t know,  and if there is a difference it probably only shows in certain conditions. I’m pretty confident the difference between 0.5% and 1.3% is significant, though, and I’ll bet my house that 8% reflection causes problems.

Just because the light gets through the filter doesn’t mean it gets through without distortion or aberration. Here’s the opportunity to make fun of marketing (OK, to laugh at the people who blindly buy into marketing). One of the filter manufacturers proudly states they grind their filters flat to 1/10,000 of an inch. Sounds pretty impressive, doesn’t it?

Imaging-grade surface flatness is usually considered 1/4 of a wavelength, which is around 150 nanometers. That 1/10,000 of an inch the marketers are bragging about is 2540 nanometers. So what the advertising actually says is ‘our filters are guaranteed not even to be close to optical grade.’

Significant waviness in the filter surface can distort the light rays passing through. There are lots of ways to look at how irregular the surface of a filter is, but in our last post, we used pinhole collimated lights to look at how much aberration a terrible filter caused. We thought it would work well to do that again. It’s certainly simple: we’re shining tiny pinholes of light through a lens; then we put filters in front of the lens and see if they have any effect.

We tried different methodologies for a couple of days and settled on testing center pinholes on a 70-200mm f/2.8 lens at 200mm. The lens we used for the test is very slightly decentered, which is true for slightly more than half of 70-200 zooms at 200mm. Optically it passes every test we have; this amount of decentering is normal. But I was curious if a bad filter might have more effect on a lens with slight issues. (We double-checked later; the filters that did the worst on this test still sucked on a perfectly centered lens, and the good ones still looked good.)

If you want more details about methodology, there’s an addendum at the bottom of the article. For now, I’ll try to keep it brief because this is a long post. Here’s how the lens rendered 5-micron pinholes at 200mm. You can see the slight decentering flare going to the right. 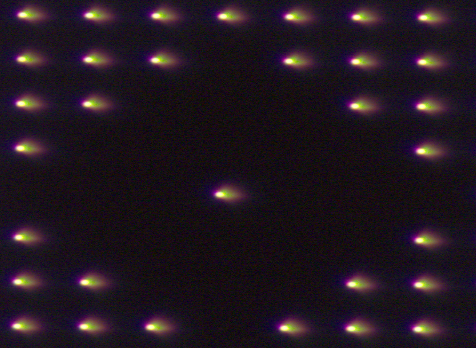 Now here is how the lens rendered just the center pinhole, magnified a bit, with each of our test filters in place. 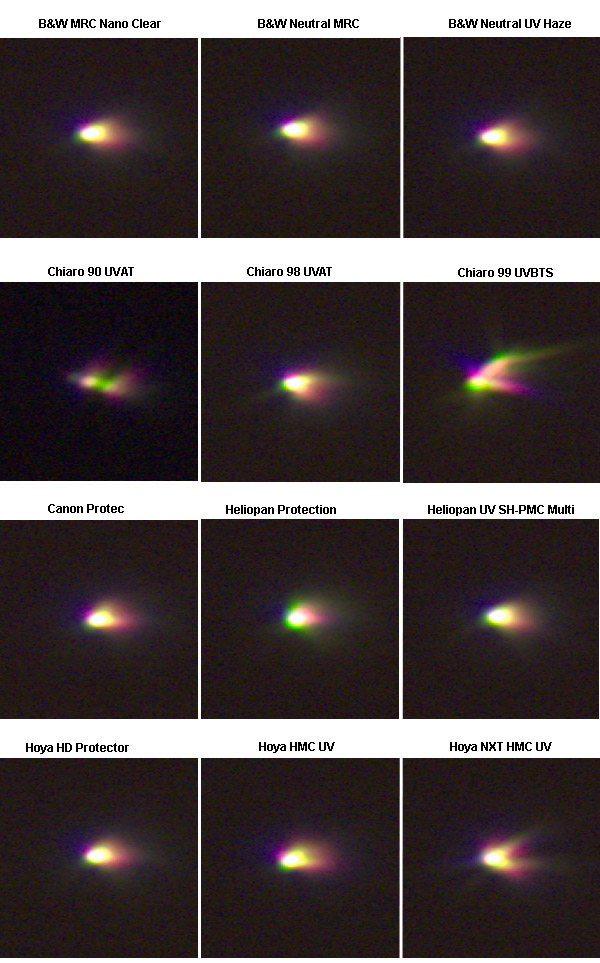 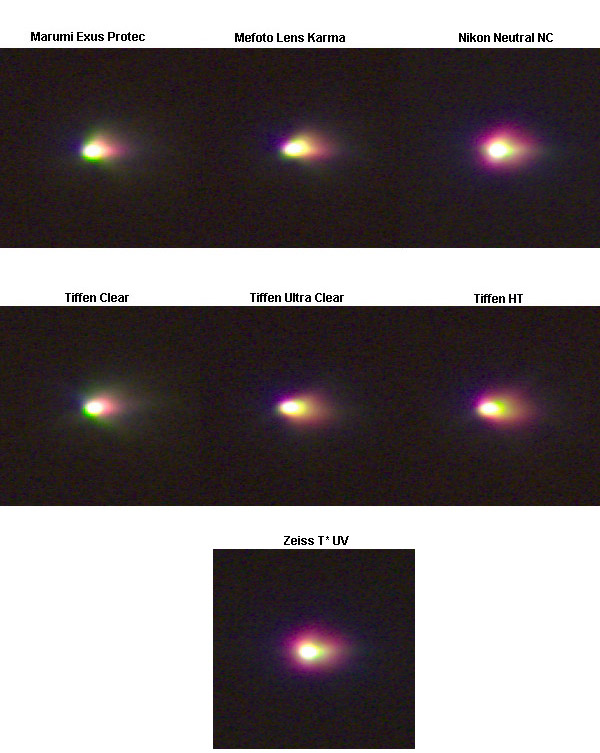 Olaf Optical Testing, 2017 NOTE: The Zeiss and Nikon filters were tested on another lens because Roger lost the original test files.

This is subjective data, of course, and I gave you full-size images so you can make your personal opinion. But Aaron and I spend all day adjusting lenses by evaluating changes in these kinds of dots. We looked at them separately, and both had exactly the same subjective conclusions:

Filter may have had an adverse effect: Hoya NXT HMC UV, Tiffen Clear;

I set out to do the mother of all filter tests and put this subject to rest for good. But, I failed to remember what should be on my family coat-of-arms: “No good deed goes unpunished.”

Instead, I got the step-mother of all filter tests because it’s got some good stuff that is useful, but it doesn’t cover everything, and while it answers some questions, it raises others. We probably should test transmission at more wavelengths of light than just the single one we chose. We didn’t even consider (nor are we interested in) testing UV blocking power. We wanted to know how much good light gets through and how much the filter would affect our image. But it’s possible that a blue or green wavelength laser might behave differently.

The bigger question, the one I didn’t want to consider, would be ‘is there sample variation in something as simple as a filter’? The reason I wonder is the Chiaro results. I’m not surprised that the $10 Chiaro isn’t as good as the $50 filter. But it is surprising that the $100 filter is far worse than their $50 filter in this test. Chiaro doesn’t make their own glass and filters; they subcontract it, as best I can tell. But it makes me wonder about quality control for bulk quantities of filter glass. Are there bad batches? I don’t know.

As to the results we have, though, I personally wouldn’t consider any filter that reflects more than 1% of light, which eliminates 8 of the filters we tested. I’d also eliminate the Chiaro, Tiffen Clear, and Hoya NXT on the basis of the distortion test (the latter two may be OK, but there are other options at the same price). What we’re left with on my not-quite-completely-tested acceptable filter list are the following:

You now have as much information as I do. This is, I know, where I’m supposed to put a click-bait statement like “the Wunderbar UltraClear” is the absolute best filter. That’s kind of silly for filters, I think. Most of us just want to know which ones won’t screw up our images. Personally, there’s nothing I see that makes me feel like the highest-priced filters are worth the money, at least on the basis of these screening tests. The Hoya, B&W, and Marumi filters on the list above all have good reputations and are reasonably priced. They should all do just fine.

As always, use in the field is the ultimate proof, but these are what I’d select from. It might be that in your own type of photography you might find one is superior to another. On the other hand, for critical work, it only takes a few seconds to remove the filter and put it back on.

The elephant in the room, of course, is whether there is variation in filters. If one batch of glass is wavier than another, it could make a difference. I don’t have any firsthand knowledge, but I seriously doubt that every filter is being put on an interferometer before packing and shipping. And yes, we will probably do screening on a larger number of filters to see if we detect variation.

And I should mention that I was only interested in the glass for these tests. Whether a thin-mount or thick-mount housing is used may be of primary importance to you when selecting a filter, but the glass inside should be the same whether the housing is thick or thin.

For the more technically inclined, here are some details most people don’t care about.

We tested the lenses both at best focus and defocused (to look at bokeh effect). While the defocused images are interesting, we didn’t find any filter that only affected bokeh; if the defocused circle was bad so was the pinhole. The bokeh circles might be considered more dramatic, though. Here is the defocused Chiari 90 from above compared to one of the other filtered lenses.