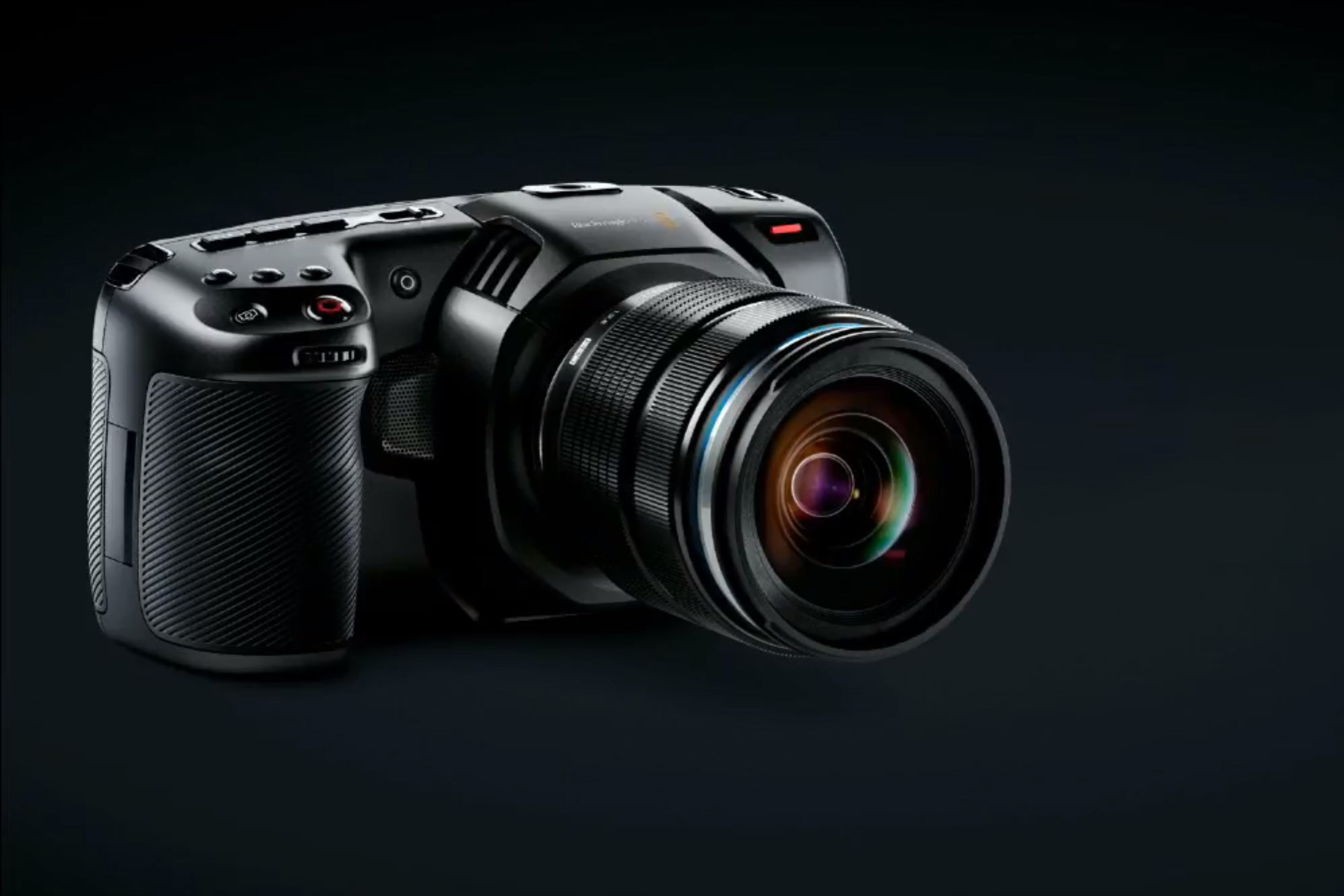 With new products coming into our office all the time, and new products being limited in their releases, it’s always a bit of a scramble in the office to get your hands on the newest products to test. But the rental stars had aligned, and I had a full weekend before the Blackmagic Pocket Cinema Camera 4K went on its first legitimate rental. To pull the curtain back a little, we at Lensrentals.com default to renting our brand new gear to you, the customer. We know you digitally queue up days, weeks, and often months to try out the latest and potentially greatest photography offerings, and we want to fulfill those dreams as quickly as possible. So it’s a pretty cool feeling, holding what few have held. There’s an excitement to being the first to press the shutter on a hotly-anticipated and hard-to-find piece of imaging machinery. Well, this time the pleasure was mine. I dutifully present to you renters that may have neglected or may still be waiting on that preorder my hottest take on the Blackmagic Pocket Cinema 4K camera.

We’ll start with the overview, and it’s built on a spec list tailor fit to the videographer on a tight budget of space as well as cash. If I could get our in-house joke out of the way, we have been lovingly referring to the BMPCC 4K (Blackmagic Pocket Cinema Camera 4K) as the Cargo Pocket Cinema Camera. It’s partially in honor of Roger – everyone’s favorite Lensrentals blog writer – but mostly because implying this camera will fit in a pocket smaller than that of your tattered JNCOs (may they rest in peace) is ludicrous. The 5-inch, 1080p display alone is more than most can cram in their skinny jeans. The carbon-fiber-infused polycarbonate shell travels a full seven inches from corner to corner, and if I’m being honest, it somehow feels even bulkier than it sounds. Think of the design aesthetic as a miniature but simultaneously-inflamed Blackmagic Ursa Mini. The thing that catches you off guard as you lift it is the absence of a heft that should accompany the bulk. It is a very light camera from the company that brought you the 16.32-pound URSA, but lightweight works in the camera’s favor here. With your average-sized Micro Four Thirds lens attached, balance is fantastic. The trend toward more and more-useful buttons that was started with the URSA Mini Pro continues here, and they struck a great balance. Exposure controls are never more than a button plus dial away and can be controlled without pulling an eye away from the action. The menu system is a continuation of the URSA Mini line as well. It remains navigable while not completely intuitive. There are less options by design, and that again works in the camera’s favor. The ergonomics overall work really well for me. 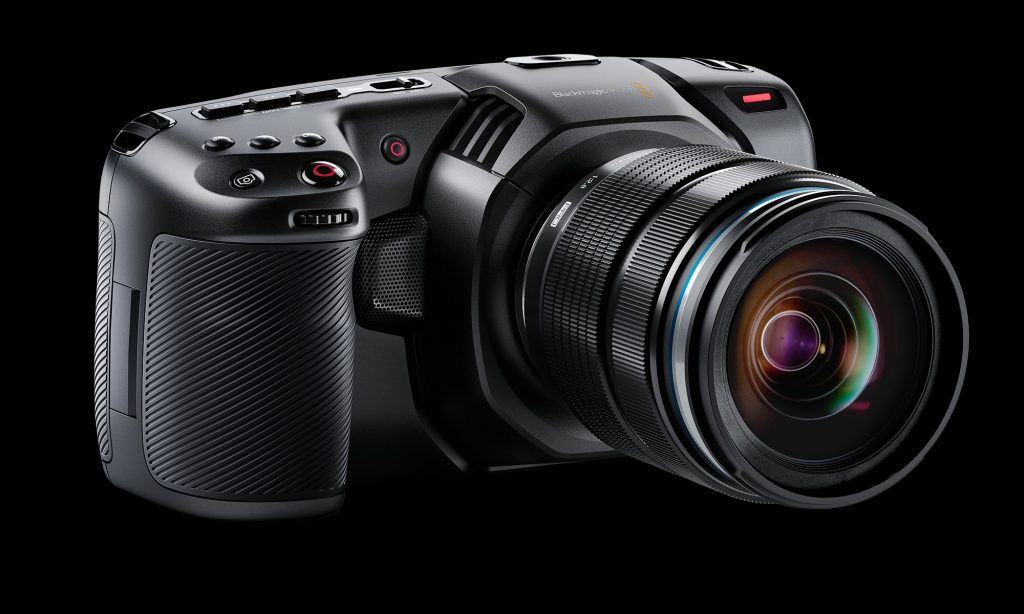 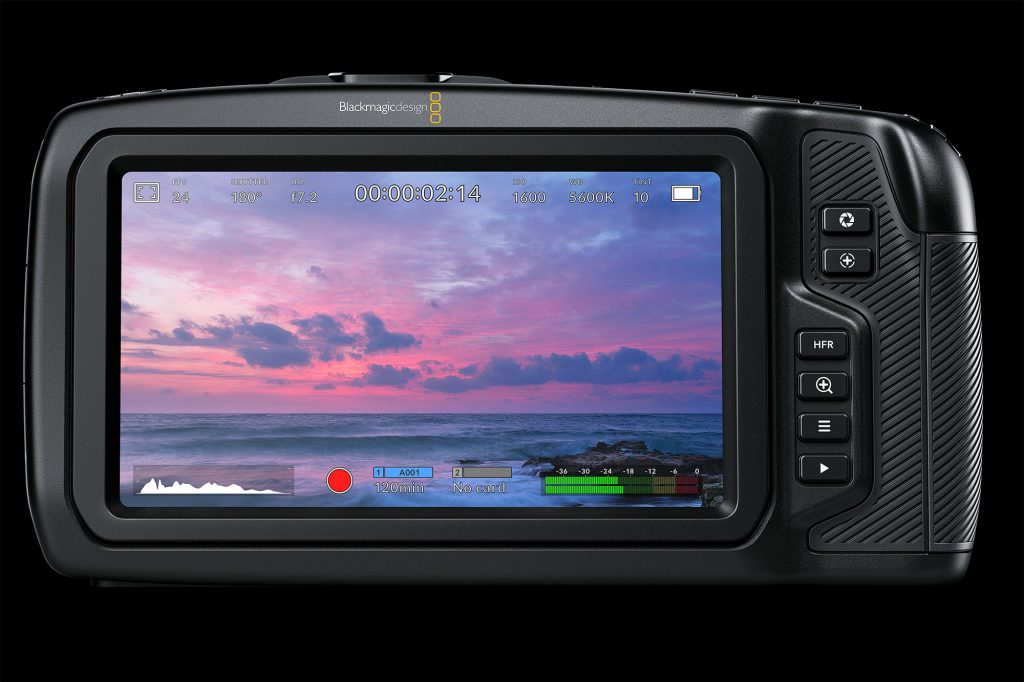 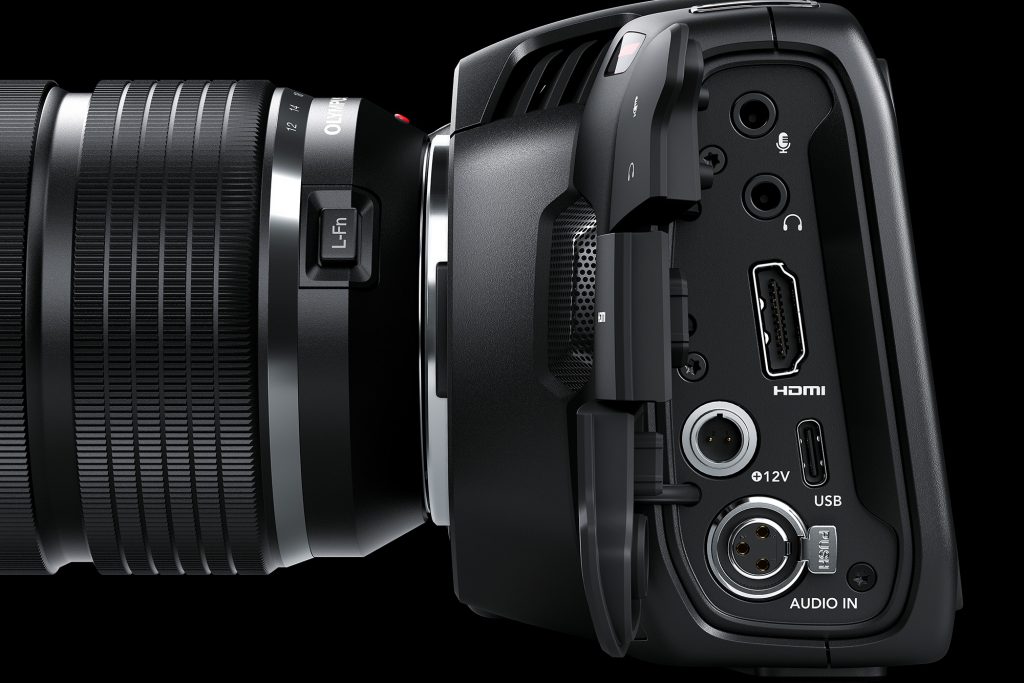 The Super 16 sensor of the former Blackmagic Pocket Cinema Camera was a limitation that I could never really work past. It produced nice images but never fully reached cinematic in my eye. The new M4/3 sized sensor gets much closer with its full DCI 4K resolution and 14 stops of dynamic range. I shot shaded subjects in full sun and stage-lit subjects at night, never feeling like I was compromising exposure on any one part of the image. Bringing the DNG images into an editor reveals all 14 stops of the dynamic range. The ability to pull up clean shadows persists to ISO 3200 without the need for noise reduction, and the highlights didn’t clip in full sun. I didn’t think to purposely blow a shot so I can’t speak to the roll-off there. The characteristic that caught my eye is the color. This camera can reproduce some astounding color with very minimal post work. My raw edit of the below DNGs consisted of nothing more than adjusting highlights and shadows and bumping vibrance to +33. A RAW workflow can’t get much easier than that. Sensor crop will be a factor for those not shooting in full DCI 4K. My advice would be to shoot everything at maximum resolution and down-res in post to bypass the limitation. The one exception is in Prores at 1080p. The camera will allow you to sample the entire sensor in that one specific crop mode. 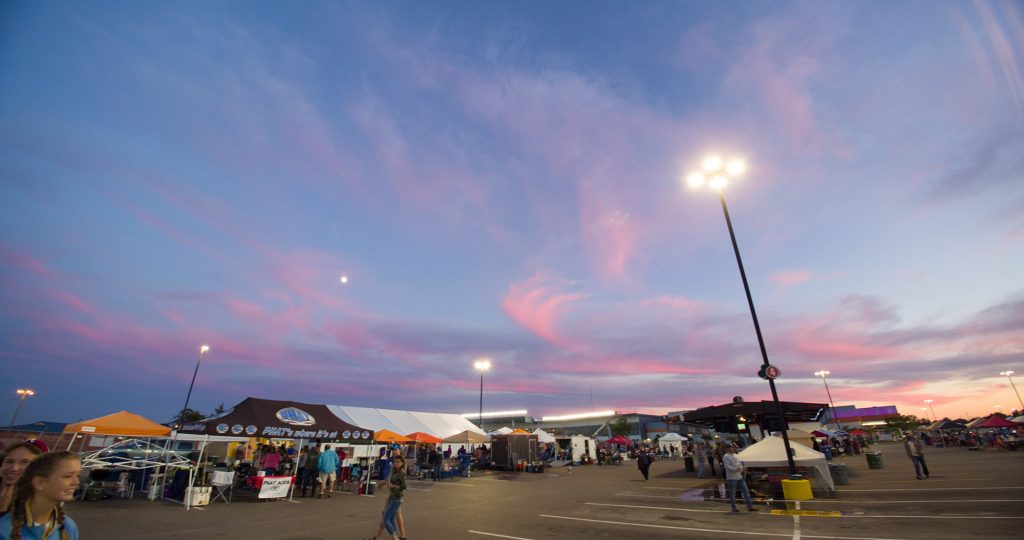 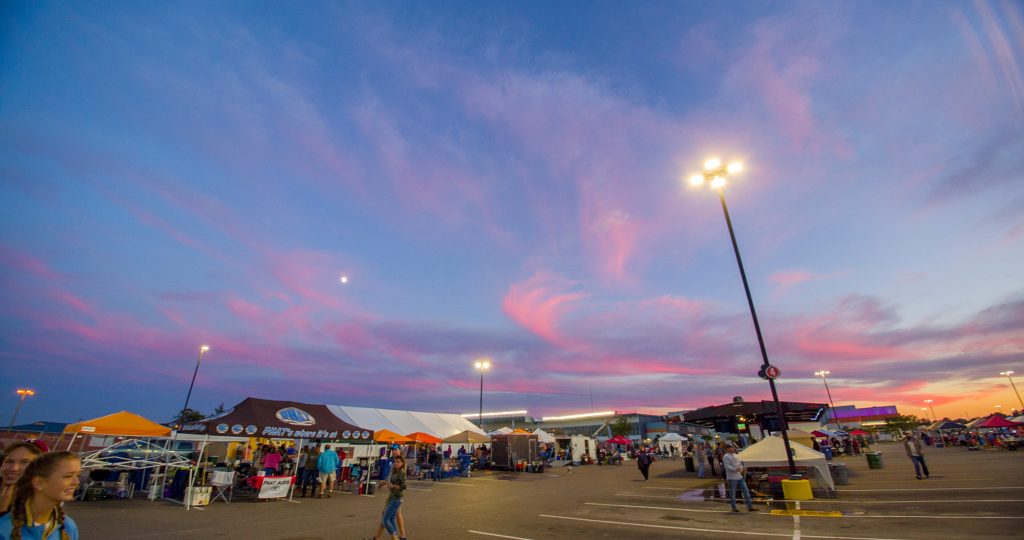 Still with minor adjustments to vibrancy

The final stand out feature of the BMPCC4K may not be impressive to most, yet it has been one of my biggest but admittedly exaggerated gripes with Blackmagic cameras in general. This camera has a usable autofocus feature. To take it a step further, it has a usable touch-to-autofocus feature. No longer does Blackmagic jerk lens focus around seemingly randomly to maybe luck into finding image focus. The Pocket Cinema 4K smoothly and purposefully heads toward your intended focal point and simply stops when it is found. File this one under most improved. Before you get too excited, there is no continuous autofocus. Although I’ve seen Blackmagic hint at a possibility of the feature showing up in a future firmware upgrade, I’m not sure it’s that fast yet. 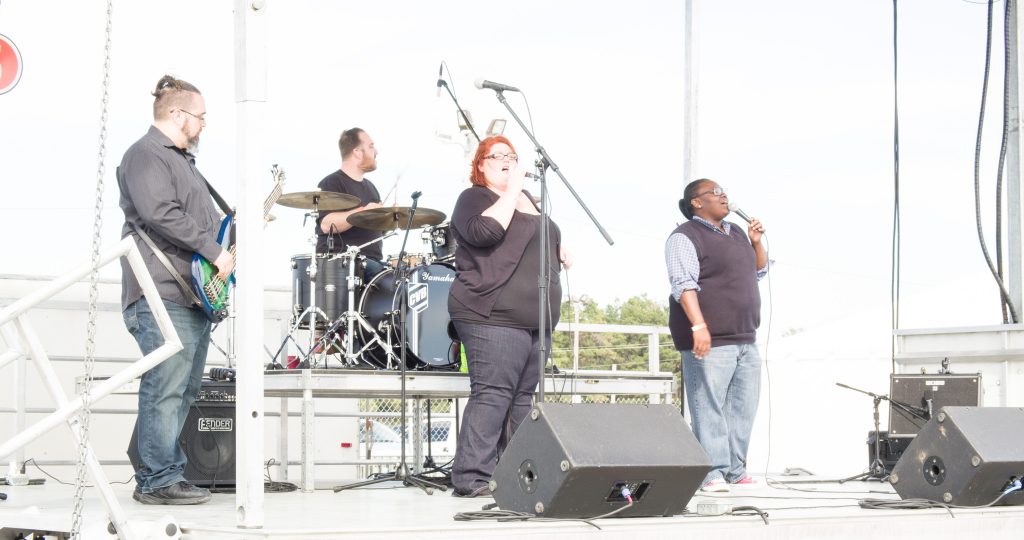 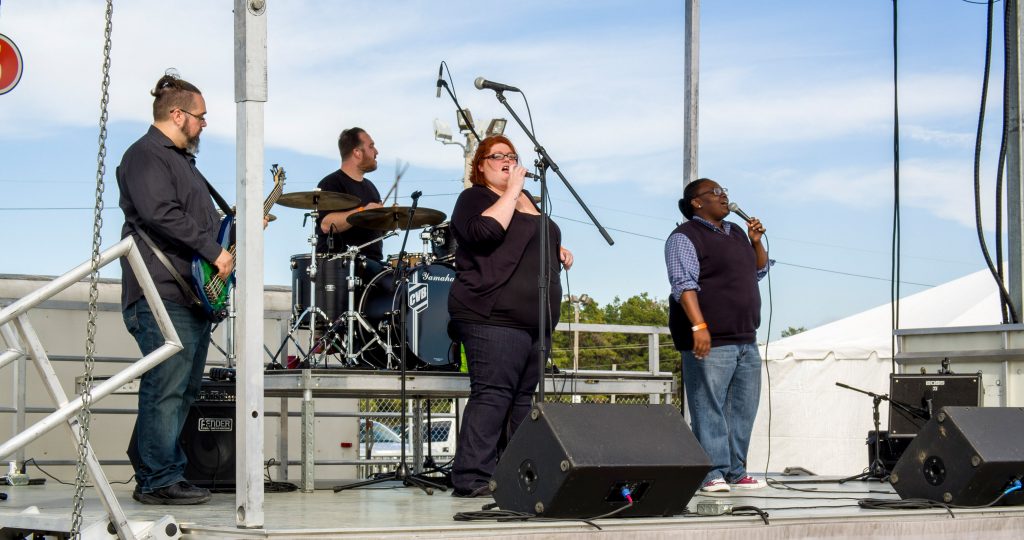 Features that don’t typically get their own paragraph but certainly deserve a mention are a phantom-powered XLR input, options for CFast 2.0 or UHS-II SDXC cards, and a USB Type-C port that allows recording straight to compatible SSDs and thumb drives. If you want to shoot full uncompressed DCI 4K RAW, I would urge you to stick with CFast 2.0. We’ve yet to find a UHS-II SD card that’s up to the task. I’m sure more camera support options are on the way, but options are slim at the moment. I used a Wooden Medium DSLR cage with great success. It’s worth noting that the camera does not have a top shoe mount like most in its size range, so you’ll have to get inventive with mounting. I used the accessory shoe mount in the Wooden kit on top of the camera. Gimbals are another sticking point at the moment. I was able to successfully balance the camera on a DJI Ronin-M, but it would not have been possible without the CineMilled Counterbalance Kit. The camera is just too wide to fit between the cage rods, so front weight must be used to push the body of the camera behind them. A full-sized HDMI port is always a plus, but note you’ll be limited to 1080p output. The convenience of using Canon LP-E6 for power is easily overlooked but means already having a stockpile of batteries for many of us. 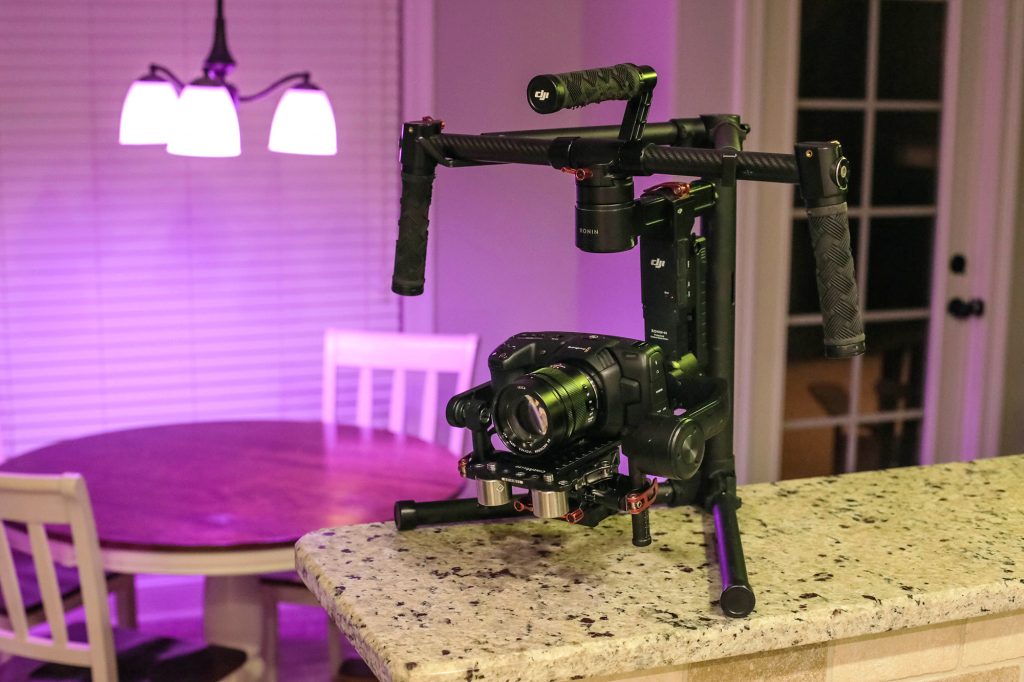 Lens compatibility is broad thanks to 10 years of Micro Four Thirds lenses. The powered M43 lens mount is capable of iris and focus control on compatible lenses, and I specifically used Olympus 7-14mm and Panasonic 42.5mm lenses for the testing seen in this article. We have had issues getting full control of Canon lenses through a Metabones adapter, so contact us with specific compatibility concerns. We’re still working it all out but will do our best to make sure your specific combination of gear will play nicely together.

Perhaps the biggest talking point in regards to this camera system is its price. At $1,295, you won’t be able to find a better RAW-capable video camera for less. With footage rivaling that of Sony’s a7s II and Panasonic’s GH5S, it’s hard to believe that it’s positioned $1,000 under the competition’s price points, but perhaps that is what Blackmagic does best. It has certainly been one of the stronger selling points for all of their cameras. The Ursa Mini, for example, competes with systems like the Sony FS7 II, RED Raven, and Canon C300 Mark II and at a fraction of the cost. Blackmagic is known not only for their ability to create professional quality camera systems but do so in a way that is conscious of those with a limited budget.

To wrap up, I’m impressed. The Blackmagic Pocket Cinema Camera 4K had a lot of hype to live up to, and in my limited time with it, found success. The camera feels nice in your hand. The improvements to basic usability by way of exposure controls are great. This image quality simply cannot be found in a similarly sized and priced camera. Will this camera be enough to pry a Panasonic GH5S out of my hands? It’s a big ol’ maybe right now. I’ll report back when current rental orders are filled sometime next year and I spend some more quality time with it.

You can download the DNG stills from this camera by clicking here.