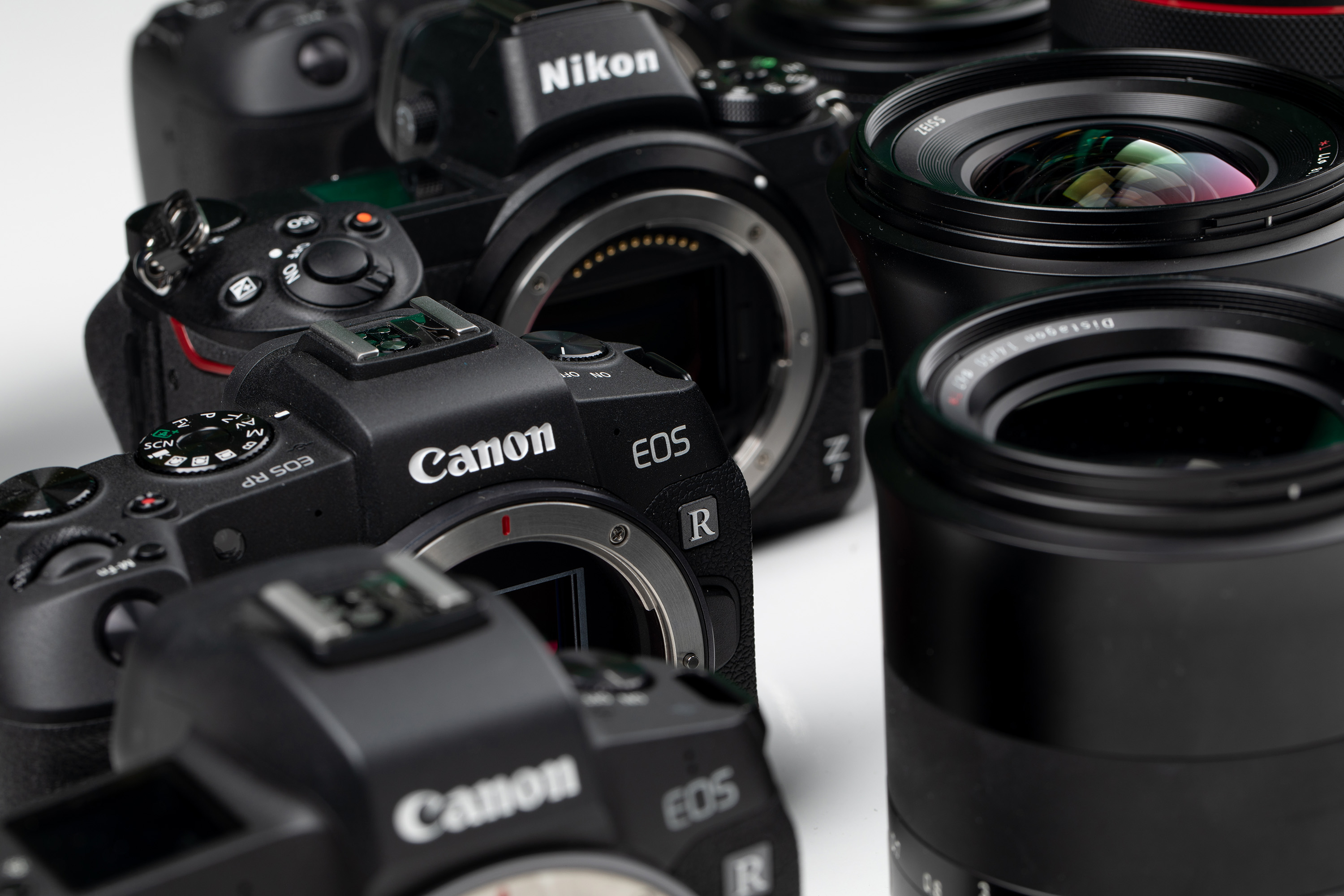 Let’s be absolutely clear; this is not a practical or useful article. It won’t help your photography or cinematography become better. It won’t help you choose equipment any time in the next couple of years. It won’t provide any fodder for your next Forum War. It’s just a geek article that may interest some people. It may give a little peek into what may come in the future, and some insight into the kind of work we’re actually doing behind the scenes at Olaf. So if you’re interested in that kind of stuff, read along.

We try hard not to assume, so we tested a bunch of lenses at high frequencies on the MTF bench (high-frequency MTF is basically high resolution on the camera). This requires testing MTF at ultra-high resolutions, way higher than any camera of today. The manufacturer wanted 240 lp/mm (compared to the 50 lp/mm we use currently). I wasn’t sure that was necessary, and actually wasn’t sure we could do it, so we settled on 200 lp/mm. If you want some understanding of what all that means, you can read the above post or Brandon Dube’s excellent post. Or you can just accept it and move on.

There was no photo or video lens that could resolve 200 lp/mm wide-open. (Our standard for ‘resolve’ was an MTF 0f 0.3; an MTF of 0.2 was borderline. There’s some evidence to support those cut-offs, but someone could argue them. Wait, this is the internet. Someone WILL argue them; it’s what someone lives for.)

We did find several prime lenses that could meet those criteria stopped down to f/4 in the center of the image, but none could near the edges. The best results were for the Zeiss Otus 85mm f/1.4 lens at f/4. A few other lenses (Zeiss 135mm f/2 APO-Sonnar; Sigma 135mm f/1.8 DG HSM Art; Zeiss 55mm f1.4 Otus) were acceptable at f/4 in the middle portion of the image. Nothing wider than 50mm was really acceptable, although the Canon 35mm f1.4 Mk II and Sigma 35mm f/1.4 Art were close.

Back to the Future

Two years later, that customer asked us if we knew of any other lenses that they should consider. There’ve been a lot of lenses released since we did these tests, and some of those lenses fit the criteria for possible ‘ultra-high’ resolution; primes with focal lengths of 85mm or more. The manufacturers are obviously making these lenses with at least moderately higher resolution cameras in mind. So perhaps some of the newer lenses would resolve ‘ultra-high’ frequencies better than some of the older lenses we had tested.

So we checked some new lenses all the way up to 240 lp/mm, something sufficient to make a 200 megapixel FF camera worthwhile. To be clear, this is NOT coming to a camera near you anytime soon; it’s a research project. But if the researchers are making such a sensor, it makes sense they want to know which lenses would get the best results from the sensor. It is not a test for if the lens or sensor out resolves the other, because that doesn’t happen.  (For those of you who believe in perceptual megapixels or that the earth is flat, I’ve included an appendix to clarify this a bit – with no math more complicated than multiplication.)

The Best We Found Last Time

Last time we found some tendencies: longer focal lengths perform better, and f/4 is the minimum aperture that any lens can resolve such high frequencies. To give you a reference, here are several lenses that met our criteria last time (notice on these we set the highest frequency at 200 lp/mm). 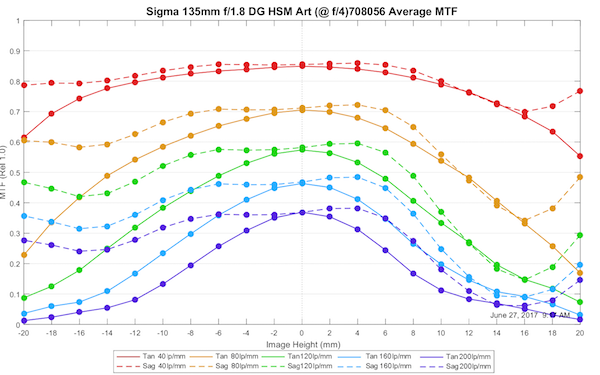 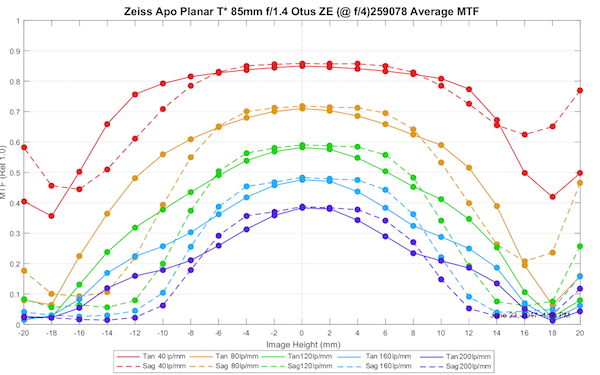 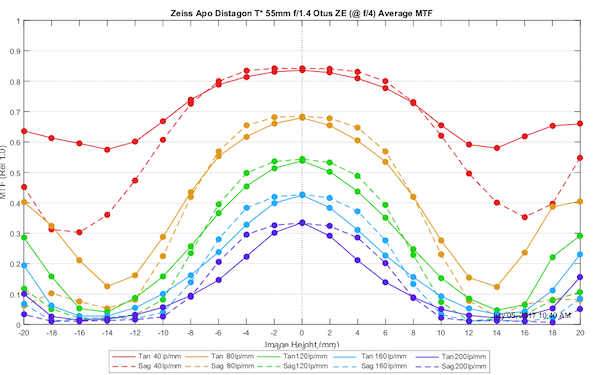 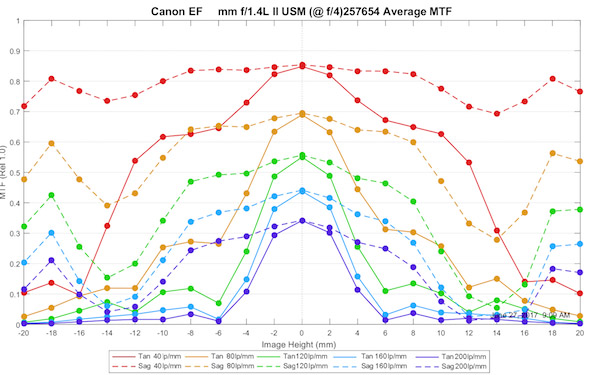 The 35mm Lens Whose Name Cannot Be Spoken

You’ve seen the best results we had from lenses you could actually buy and use. We did see one lens that you can’t purchase, a prototype lens that will probably never be made, that was truly amazing, particularly for a 35mm focal length. 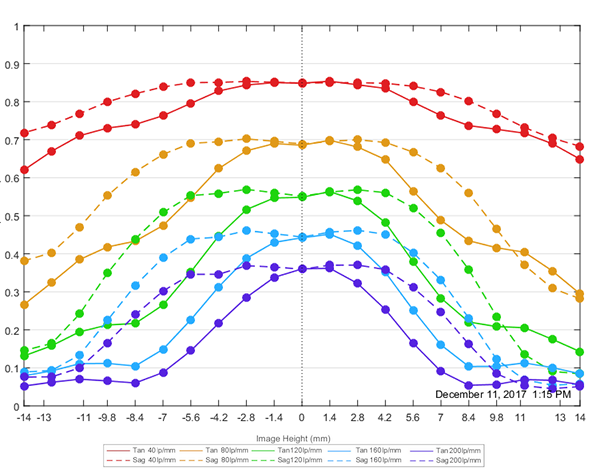 So here is a 35mm lens that is as good as the 55m Otus; it’s that it’s this good at f/2.8 and doesn’t improve much at f/4. I put this up just to show that current lenses are not designed to do their best at ultra-high resolution, but they could be.

We Wanna Take it Higher

Last time around, we set our peak at 200 lp/mm, even though the client really wanted 240 lp/mm. We didn’t think the higher number was really necessary, and honestly, we weren’t sure that any of our lenses would adequately resolve even 200 lp/mm. This time, though, we felt comfortable we could test at 240 lp, and doing that, let us also test at 192 lp/mm, which is pretty close to the original 200 lp peak.

For starters, we repeated the test using a Sigma 135mm f1.8 Art. You can compare it to the one done at 200 lp up above. Remember, these are single copy tests, so there is a little sample variation, but you can see the light blue line of this run (192 lp/mm) is comparable to the purple line of the previous lens (200 lp/mm). Even at 240 lp/mm, the MTF still exceeds our ‘borderline’ MTF cut-off of 0.2, at least in the center, but it doesn’t quite reach and MTF of 0.3. 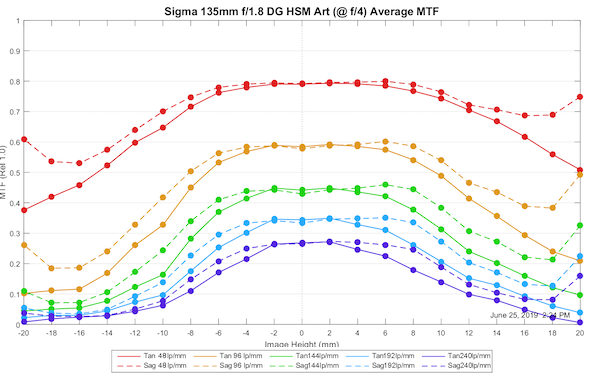 We’ll consider this our standard for the new tests, then, and see if any of the other lenses do as well.

We’ll start with the usual “Roger had expectations and was disappointed” part, because, after all, disappointment is the sole purpose of expectations. One of the reasons I was excited about testing new lenses was that the Sony 135mm f/1.8 GM had the best normal-range MTF scores we’d ever seen, besting the Sigma 135mm f/1.8 Art. It seemed logical that it might also best the Sigma in ultra-high resolution tests. Reality 1, Logic 0. We tried the lens at f/4, but it was actually a bit better at f/5, which we show below. At high frequency, it’s not as good as the Sigma. 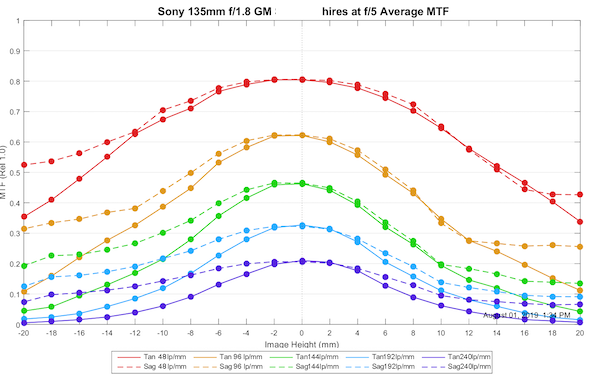 Let me repeat, for those of you who want to mistake this test as having something to do with, say, the 60-megapixel full-frame camera you’re shooting; it doesn’t. Somewhere around 80 lp/mm would be more than sufficient for that. If you compare the orange lines of the Sony and Sigma 135mm graphs, you’ll see that at 96 lp/mm the Sony is actually a bit better than the Sigma. At ridiculously high frequencies, the Sigma is better. The takeaway message is important: better MTF at one frequency doesn’t mean better MTF at all frequencies.

So let’s look at a couple of other candidates I thought might do really well.

Even though this copy was slightly tilted, in the center, at least, it is the first lens to make, albeit barely make, our ‘acceptable’ cut-off of MTF 0.3 at 240 lp/mm. At 192 lp/mm, it actually touches MTF of 0.4. So we have a new high-resolution champion, and that’s despite, as you can see below, this copy of the lens having a slight tilt. 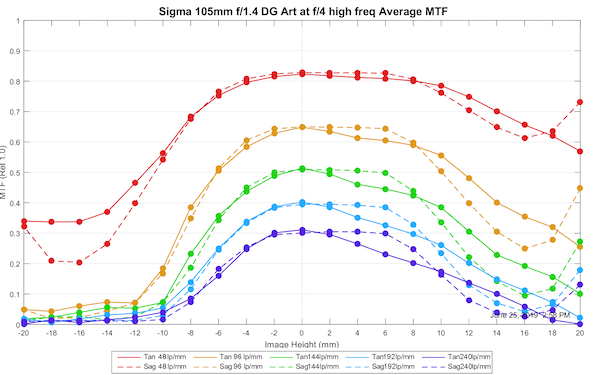 Another good contender; not quite as good as the Sigma 105mm, but very similar to the Sigma 135mm. 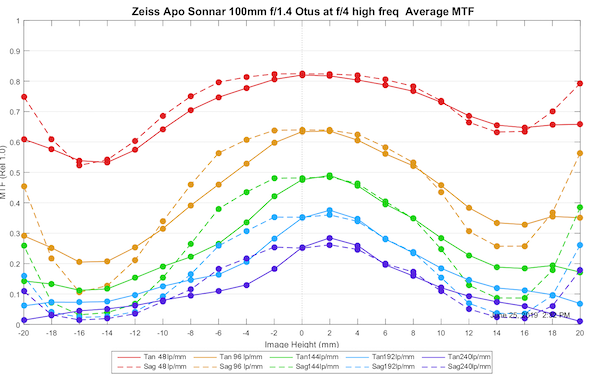 This one I had low expectations for, but we had one handy, so we thought we’d give it a try. Set your expectations low, and they will be met. Again, don’t get me wrong, this is a really, really good lens, it’s just not as good at ultra-high resolutions. 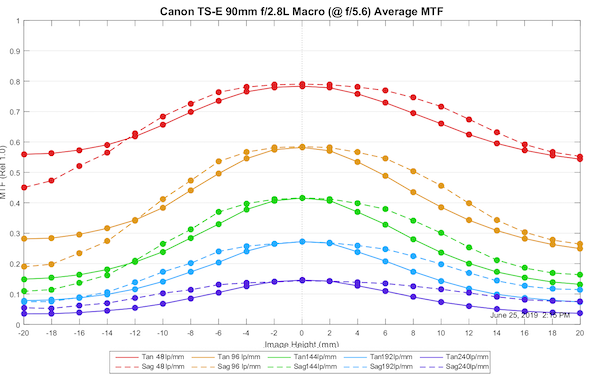 We learned from earlier testing that wider-angle lenses don’t do as well at these frequencies. But the Sigma 40mm Art tested so spectacularly at normal MTF that we thought it was worth a shot, at least. 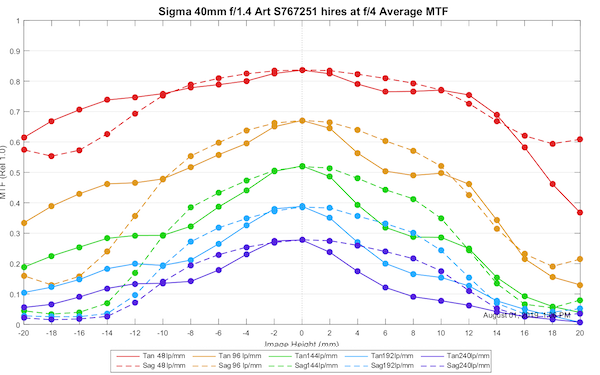 Here’s a case where good at normal resolution translates to good at ridiculously high resolution. This is close to, although not quite as high in the center as the Otus 55mm. It stays acceptable further away from the center than the Otus 55mm does, however.

I say summary, because there are no practical or useful conclusions to be made. The only thing of interest, probably, is that only really good lenses can resolve ultra-high resolutions you’ll never need. However, even among these really good lenses, you can’t assume how a lens will perform at ultra-high resolutions based on its results at normal resolutions. You can also see that ultra-high-resolution performance is a bit easier to obtain in short telephoto focal lengths than in standard or wide-angle lengths.

Oh, yeah, and you can also wonder why someone, somewhere, is wondering what lenses will perform well at resolutions more than twice as high as what you might need today.

Appendix: Why Perceptual Megapixels are Stupid

I get asked several times a week if this lens or that is ‘capable of resolving’ this number of megapixels. Some people seem to think a lens should be ‘certified’ for a certain number of pixels or something. That’s not how it works. That’s not how any of it works.

What if I got a better camera and a better lens? Well, theoretically, things would be so good I could see the ants if I enlarged the image enough. MTF is somewhat of a measurement of how sharp that image would be and how much detail it contains. (The detail part would be the higher frequency MTF.) That would, of course, be the MTF of the entire system, camera, and lens.

Lots of people think that will be ‘whichever is less of the camera and lens.’ For example, my camera can resolve 61 megapixels, but my lens can only resolve 30 megapixels, so all I can see is 30 megapixels.

Now, let’s say I get a much better camera with much higher resolution; the camera MTF is 0.9. The system MTF with the same lens also increases: 0.7 X 0.9 = 0.63. On the other hand, I could do the same thing if I bought a much better lens and kept it on the same camera. The camera basically never ‘out resolves the lens.’

Roger’s rule: If you have either a crappy lens or crappy camera, improve the crappy part first; you get more bang for your $. I just saw a thread for someone wanting to upgrade to the newest 60-megapixel camera, and all of his lenses were average zooms. I got nauseous.