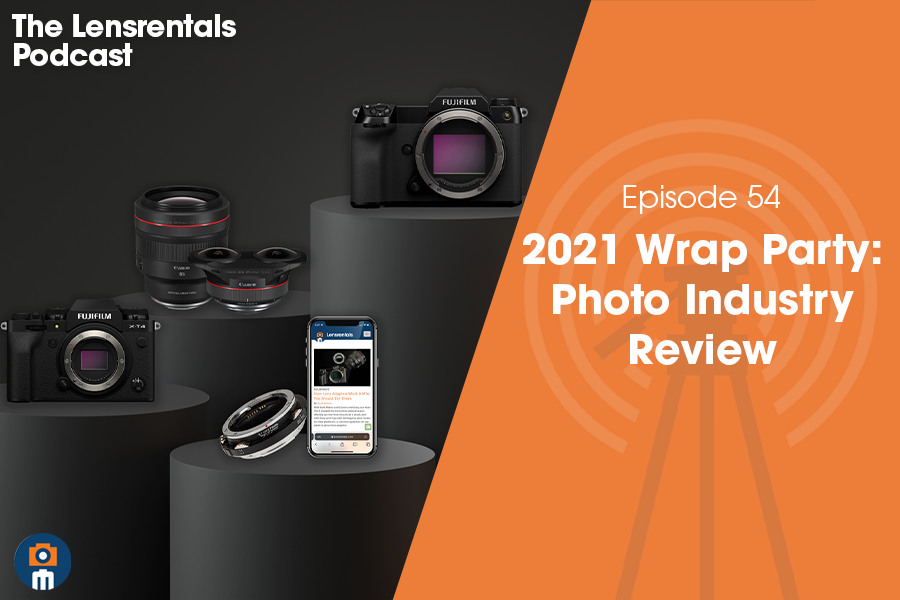 It’s our year-end review of photography! Ryan Hill is talking with Lensrentals Quality Control Manager Joey Miller and Blog Editor Zach Sutton about their favorite gear of the year, what they’re looking forward to next year, and what photographers inspired them in 2021. Before we get to all of that though, Roger wasn’t able to join for the full conversation so he recorded an annual report of sorts, sharing his insights on the year in optics.

There was a lot to cover in the photography world in 2021, from new launches of flagships like the Canon R3, and the soon-to-be-released Nikon Z9, to talks of unionization for many people in various industries in photography. Ryan, Joey, and Zach sit down and talk about some of their favorite products for 2021, where they think the industry is heading as a whole, and where they find their inspiration in a year that is considered by many as a rebound year for the industry as a whole. What was the most important thing you learned about the photography industry this year? What were some of your favorite products and announcements this year? Feel free to start a discussion in the comments below, and listen in as some of our resident photographers talk about what brought them the most joy this year.

0:45 – Roger is not only frequently asked about how optics are changing, but often told that there’s not been change in the entire industry in quite some time. And Roger says that actually, the entire camera industry has changed a lot. From days gone by of “intro cameras” to obliterated supply chains to technology vastly improving, to manufacturers not actually assembling their own gear much less repairing it.
6:00 – Time for Joey and Zach to join Ryan in reviewing the year, as positively as possible. Ryan is asking the photo guys the same 5 questions he asked of our contributors in the video end-of-year episode to keep things consistent. Question 1, “What product or products made you the happiest this year?” Joey and Zach both sing the praise of the Fuji GFX 100S Medium Format Mirrorless, mainly because it’s the size of the Fuji GFX 50S while also having the “big ass” sensor in it.
10:40 – Are there advantages to shooting at a higher resolution than a photographer is going to deliver the images in? In the video world, it’s common to shoot 4k and deliver in 1080 for sharpness and cropping, and we discuss how there are similar benefits for photographers.
11:40 – Having used Canon almost exclusively for his professional work in beauty portraits, Zach is a big fan of how the GFX 100S is “the most un-medium-format, medium-format camera” he’s ever used. And known medium format film lover Joey confirms that “it’s better than literally any film medium format.”
16:30 – The other product sparking happiness for Zach is the Fotodiox Pro Fusion Smart Autofocus Canon EF to Fuji GFX. It allowed him to avoid a pain point he was dreading and he was such a fan he wrote a whole blog post about why photographers should try lens adapters again because they’ve come a long way, read more about his experience here
21:40 – Question 2: What are you looking forward to besides the R3 and the Z9? Joey doesn’t personally think he’ll shoot with the R3, but the face detection and eyepoint detection made a recent gig noticeably easier for him using the R5, so he and Zach are both excited to see the R3 in use the world, even if they’re not necessarily going to be using it.
25:00 – There is a common theme in this episode where the photographers are excited about the same items mentioned by the videographers. Zach is continuing this by sharing how he’s excited that Canon is “just getting weird” with several of their lens choices as of late. From the Canon RF 85mm f/1.2L DS to the Canon RF 5.2mm f/2.8L Dual Fisheye 3D VR, photo and video are merging, and it’s getting very apparent.
27:45 – Fuji has a GF tilt-shift lens that is slated for 2023, and a 55mm f/1.7 too. 2022 should include a 20-35mm wide-angle zoom which is cool, but we wouldn’t mind seeing some more weird lens options from Fuji as well.
28:25 – Break
29:05– Question 3: How do you think the industry changed this year? Zach has noted a shift from staying busy with smaller shoots, to having larger jobs that cover multiple days, and are less frequent. Which can be pretty stressful for self-employed individuals.
31:25 – It also seems that the vast majority of people have realized that remote work isn’t inherently bad. Being sent product, a style board, discussing the vision and having a deadline has not only made product work easier to produce for many creatives, but also enabled a little more quality from the sense of freedom to take a few more moments to perfect the shot in-camera, resulting in less retouching, etc etc.
33:50 – Zach tethers into Capture One for all of his shoots allowing live remote viewing with his clients as he works which allows them to see images as they come out, leave notes, and select favorites. The process doesn’t have to be entirely blind if it’s remote,
35:00 – Question 4: How do you hope the industry changes in the next year? There’s been a lot of churn over the last 2 years with full-time photographers leaving the industry at the same time as many people have left their traditional jobs and gotten into the industry too. Everyone hopes the diversity in who is behind the camera and creativity in how commercial work is being shot continues.
38:00 – Another hope is for people to get paid what they’re worth, creatives coming together in their communities to form more unions or guilds and in lower markets to stop trying to undercut each other. Obviously, these themes have been on all of our minds lately as this came up on the video end-of-year episode too.
40:25 – Question 5: What photographers should we know about? Zach’s list is heavily influenced by his Instagram feed which features mainly beauty photographers and he recommends looking up Sarah Brown, Kate Whyte, William Clark, Mandy Stoller.
Joey recommends Phil Penman, Jason De Freitas, and Liz Potter.
43:45 – Ryan shouts out Naomi Harris who Joey realized rents from us. She does documentary style with a very fun bent.