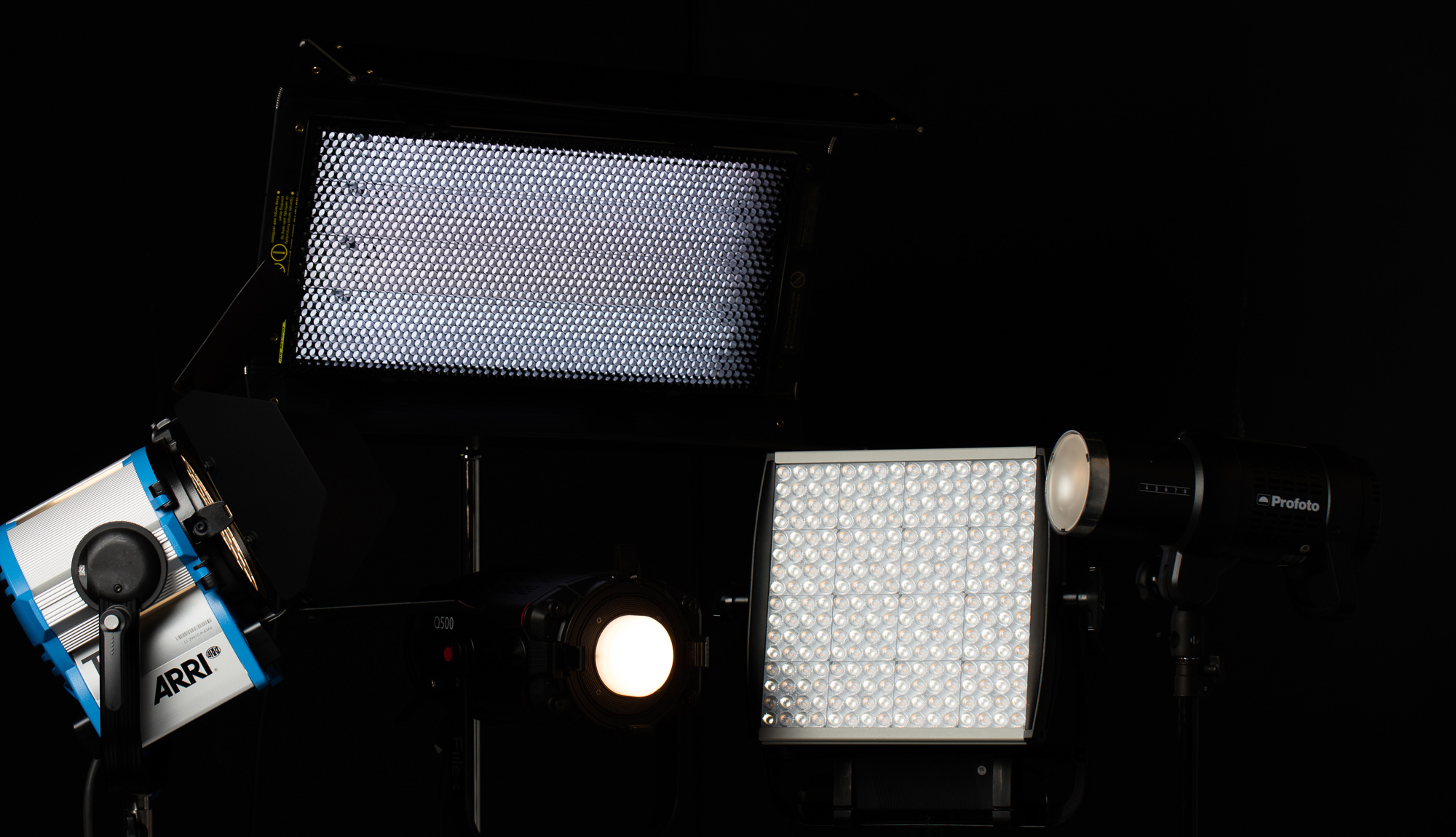 A common question when bringing off-camera flash to your repertoire is whether you should invest in studio strobes, or if you should be using consistent lighting for your photography work. If this were ten years ago, I’d say to invest in strobes, and this advice would look more like a tweet than an actual article. But these last few years especially, there have been several new advances in technology, and as such, my answer is far more complicated. So let’s dive in on this question – Is constant lighting the new favorite for photography, or are strobes still the answer?

What Are Studio Strobes?

As the industry standard since the 1940s when Speedotron packs started making their way to studio photographers, studio strobes are a way of lighting your subject by shooting a bright light at an incredibly short duration (commonly called a strobe flash). By firing the light at fractions of a second, studio strobes allow you to use faster shutter speeds (that can help cut ambient light), and be incredibly more efficient with your lighting, as the flash is only firing when you click the shutter. Its short flash duration allows the light to “freeze” motion and creates a bright light with almost zero heat.

What Is Constant Lighting?

Constant light, as the name suggested, is a light that is always powered on. Common in video productions (because the lights gotta stay on, obviously), Constant lighting come in a broad range of style and fixtures. From HMIs to LEDs, and fresnels to panels, constant lighting has grown and changed considerably over the last few years, offering higher power output with lower heat issues. Because of their always-on design, constant lights have the benefit of giving you a “what you see is what you get” style of lighting, and paired with the ability to use them for both stills and video.

What Lingo is Attributed With Each Light?

Each light style has several unique verbs used to describe its features, so before we dive into which light is the best for your photography work, we must talk about some of their terms so that we have a better understanding of how each works.

Strobes are generally measured in Watt Seconds or Ws. Most lighting geeks hate this standard of measurement, as it doesn’t give you the full picture. Watt seconds (and watts, by definition) is a measure of power consumption, which doesn’t always translate to light output. In the same way, a 250hp Mazda Miata would be way faster than a 250hp Toyota Tundra truck, the watt-to-light output is dependent on efficiency. Two 500Ws lights could provide different light outputs – particularly if one uses high-quality electronics whereas the other cuts corners in its electronics. But alas, I’m going on a tangent. In layman’s terms, power output is usually signified by watt seconds in strobes.

In recent years, battery-powered strobes have become a popular staple in the photo world, which gives them a huge advantage over constant lighting. The ability to move your lights from in-studio to on-location without the need for an outlet makes shooting on the go way easier. However, with battery-powered strobes, comes a few additional numbers to look at. If you’re looking at battery-powered lights, you might also want to look at battery size, and how many flashes that will get you.

Additionally, each brand of lighting will also have its own mounting system, which is an important feature when determining which brand to go with. While the mounting system doesn’t fundamentally limit you on the number of modifiers you have for each light (as speedrings can be converted), the process admittedly can be a pain. Among the most common mounting options are Profoto’s rubber press mount, and Bowens mounting brackets. You’ll need the correct speedring for each light modifier to play nicely with your strobe.

Measured differently than studio strobes, most constant lighting options measure their lighting in wattage (not to be confused with watt-seconds). However, like before, wattage is a measurement of electricity going to the unit and isn’t always indicative of actual output. And when it comes to photography, the watts and watt-seconds don’t translate well – a 500Ws light is quite a bit more powerful than a 500-watt constant lighting – particularly when applied to photography. Most all newer lights have a power dial built in, so a general rule of thumb, is it’s better to have too much power and turn it down than try to make do with something not powerful enough. To illustrate the 500-watt constant power light and a 500Ws strobe point, I took exactly that into my studio, and with a reflector attached (to help with light spread), I took a quick photo with each light at full power.

The color rendering index (or commonly, CRI) is a measurement used to determine the ability of a light source’s ability to accurately reproduce the colors of the things it illuminates. This is measured on a scale of 0-100, with 80 being considered good, and anything above 90 considered excellent (with pro-level lights pushing the 95+ range). The term is most frequently associated with LED panels and lights, as incandescents are generally regarded as having perfect, or near-perfect CRI levels.

Modern LEDs have the huge advantage of being color-changing – offering you the ability to change the color of the light coming from the source. While this feature will often affect the CRI levels of a light (because everything is a give and take), this is usually depicted by two terms. Bi-color LEDs allow you to adjust the white balance of your light, from a cool blue to a warmer white tone. These lights don’t offer actual color-changing abilities beyond the white spectrum, but can be incredibly useful when shooting in a variety of lighting scenarios. RGB (and RGB+W) lights allow you to adjust the light’s color output, along with the power (red, green, blue, power). When using RGB lights, you no longer do you need to find colored gels for your work, and instead can rely on the light to change your light’s color output as needed.

There are several advantages to using a studio strobe over a constant light for your photography work – however that gap is closing. The biggest advantage is just the power abilities found with a studio strobe. When used right, a 500Ws can compete well with the sun’s brightness, allowing you to get an even spread of light across your subject. This power advantage also helps with sharpness in the studio. Whereas with a constant light, you may need to be shooting at ISO 800, and at 1/80th of a second and f/5.6, a strobe can easily get you to ISO 100, 1/200th a second, and f/16, which will result in generally cleaner and sharper photos throughout. They can also do this will little heat, since the light is only on for 1/10,000th of a second or so.

While constant lights are getting ever more powerful but still sit behind most standard strobes, their biggest advantage over studio strobes is their standard use case – for video. Whereas strobes are designed specifically for photography, constant lighting can apply to both video and photography. This gives you far more versatility than a studio strobe and offers a light that could potentially double duty as both a video light and a photography light. Additionally, as many constant lights are now LEDs, many of them also offer to gel on the fly, allowing you to change the color setting of the light from a range of 16 million different colors.

So which one is the answer for a modern photographer? Well sadly, there is no blanket answer for everyone. I still use studio strobes for 98% of my work and will continue to invest in strobe platforms. However, many studio strobes haven’t made any large advancements in power levels and other features in several years, whereas LED technologies in constant lighting are constantly putting out new advancements in technology and power. As video resolutions increase, I absolutely see a future where actor and business headshots are taken in 10-second video clips, and the favorite frame is picked from that selection – if the video isn’t used altogether.

This article is by all accounts, an intro to this subject. If you would like us to expand further on this topic, be sure to chime in in the comments below.

I’m Zach and I’m the editor and a frequent writer here at Lensrentals.com. I’m also a commercial beauty photographer in Los Angeles, CA, and offer educational workshops on photography and lighting all over North America.
Twitter Facebook
Tweet
Posted in Equipment
How Front Element Scratches Affect Your Images
Why has the Fuji X100V Grabbed the Attention of Millions?