The Canon ST-E3-RT Speedlite Transmitter is Canon’s first wireless transmitter based on radio-signal technology. Please note that we also carry an updated version of this transmitter. Key features include:

Flexibility. The Canon ST-E3-RT Speedlite Transmitter gives users the flexibility of line-of-sight-free shooting when coupled with the Canon Speedlite 600EX II-RT, 600EX-RT, or 430EX III-RT. With a range of 98.4 feet and the ability to adjust ratios and actual power settings from the transmitter itself, the ST-E3-RT greatly simplifies elaborate lighting setups.

Intuitive Controls. The ST-E3 features a detailed LCD with clearly laid out, backlit buttons for full control of settings. Since the transmitter uses a radio signal, it’s only compatible with the radio-signal based 600EX-RT. Despite this, the ST-E3-RT transmitter still offers more control of its compatible Speedlite than any other trigger system out there.

Power. The ST-E3-RT is powered by two AA batteries (not included).


The ST-E3-RT transmitter gives Canon the upper hand in the world of off-camera flash shooting. It eliminates the need for multiple accessories just to make your flash work off-camera. While I do ...

The ST-E3-RT transmitter gives Canon the upper hand in the world of off-camera flash shooting. It eliminates the need for multiple accessories just to make your flash work off-camera. While I do have a few big gripes with it, like the lack of AF assist & no infrared signal, it’s still a wonderful step forward. If you’re using 600EX-RT Speedlites off-camera, you want this trigger.

One quick rant, because just looking at the picture doesn’t tell you this. The display screen and controls are on the top of the transmitter, which isn’t too big a deal. Just tilt the transmitter, because Canon was smart enough to make it pivot. WRONG! There is no pivot! Full control of off camera Speedlites is possible using the improved screen and button layout, but quick adjustments must be done by lowering the camera to waist-level to see the screen. Why Canon, why? It’s not a deal breaker by any means, but you will notice this omission. 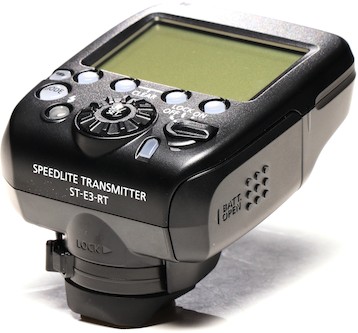 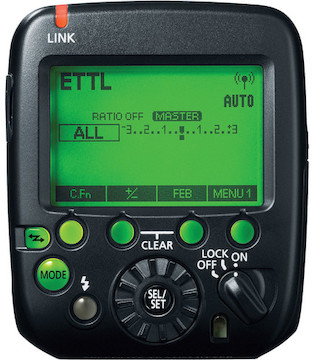