New Body. The GoPro HERO5 represents a significant change in body design from the most recent GoPro HERO generations. The HERO5 is now waterproof down to 33 feet without the need for an external case. For the first time in the Black edition, there’s a built-in rear LCD with full touchscreen controls. The included Frame adds extra protection and support for a variety of mounting options.

New Image Processor. The HERO5 features the same sensor as the previous-generation HERO4, but uses a faster image processor that allows for RAW photo capture in the proprietary .GPR format. You also get electronic image stabilization that helps keep your shot steady. And the HDMI output has also been upgraded to support clean, 8-bit 4K output.

More Controls. GoPro’s manual mode has been extended to give you control over ISO and shutter, allowing you to lock in each independently. You can also start and stop the camera with the sound of your voice.

Better Audio. The HERO5’s body features three microphones. In adverse sound conditions, like wind, the camera will analyze the audio captured by all three mics and automatically pick the best source to create a mono track. This gives the cleanest audio available to the camera at any given moment.

Auto-Exposure Tracking. The HERO5’s auto-exposure mode allows you to set a subject and track it, making it even easier to keep proper exposure on your subject in unpredictable situations. 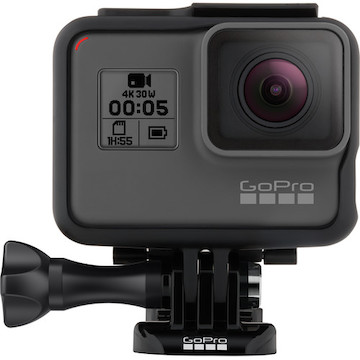