The Metabones Canon EF Lens to Sony E Camera Adapter IV is the fourth iteration of the Metabones Smart Adapter for EF to E. Key features include:

New to the Mark IV. The Mark IV’s new inner housing design features a larger opening than the Mark III’s, improving functionality when using a Tilt-Shift lens. A black coating has been applied to the inner housing, further reducing internal reflections that can cause flare.

Canon EF Lens To Sony E Camera. This adapter allows you to mount Canon EF-mount lenses to Sony E-mount cameras and camcorders. It offers full-frame coverage, making it the go-to Canon adapter for use with the a7, a7R, and a7S. 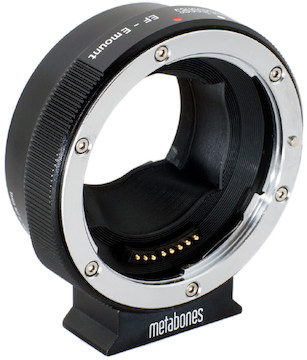