While we no longer rent this product, we do carry the Olympus OM-D E-M10 Mark IV. You may also find alternatives in the Recommended section on the left-hand side of this page.

What’s Changed? The E-M10 Mark II builds on the original E-M10 by incorporating some of the E-M1 and E-M5 Mark II’s best features. A few of the most notable additions are five-axis image stabilization, a larger electronic viewfinder, Full HD 1080/60p video capture, an electronic silent shutter, and a 4K time-lapse mode.

Five-Axis Image Stabilization. Probably the biggest improvement in the E-M10 II is the move to a five-axis image stabilizer. The former’s three-axis was decent, but it just left you yearning for the superior five-axis found in the rest of the Olympus lineup. With up to four stops of correction applied to any lens mounted, the EM10 II makes camera shake much less of a concern.

Improved Autofocus. The autofocus system hasn’t necessarily changed—it still uses an all contract-detection system with 81 AF points. A new standout feature is the AF Targeting Pad, which allows you to select the autofocus point using the rear LCD while shooting with your eye to the viewfinder. If you’ve used any of the small-body mirrorless cameras, you’ll welcome this feature with open arms.

Build and Ergonomics. This is one area in which the Mark II is vastly superior. There’s still no weather-sealing and the body is largely plastic, but the buttons and dials are higher quality and the control layout is improved. The Mark II has the same 3.0-inch touchscreen rear LCD as its predecessor, but the larger 2.36M-dot OLED electronic viewfinder is a welcome improvement. Lastly, Olympus once again included a built-in pop-up flash rather than removable accessory flash.

Other Notable Features. The E-M10 Mark II balances beginner-level, user-friendly auto and art modes quite well with the button customization and manual controls desired by advanced amateur and prosumer users. In-camera HDR, 4K time-lapse capture, and Live Bulb/Live Time settings are also available to those who want to try their hand. Like most cameras these days, there’s built-in Wi-Fi, enabling wireless image transfer and camera control via smartphone. The camera records images and video to SDHC/XC memory cards, and the included rechargeable battery is rated for 320 shots per charge. 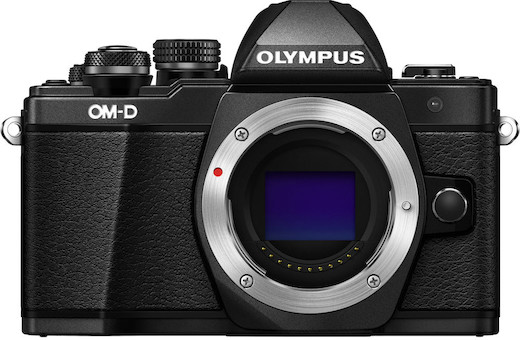