The Sony 256GB XQD 440MB/s G Series is a high-speed XQD memory card that’s designed for 4K video capture. The newer version of this card has a capacity of 240GB. Key features include:

Reliable Storage. While Compact Flash memory cards use a multiple pin interface, the XQD format adopts a variation of the PCIe computer interface. This means no bent pins or warped pin holes, making the format much more reliable. 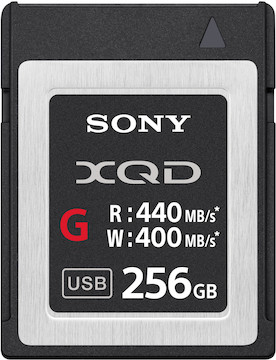