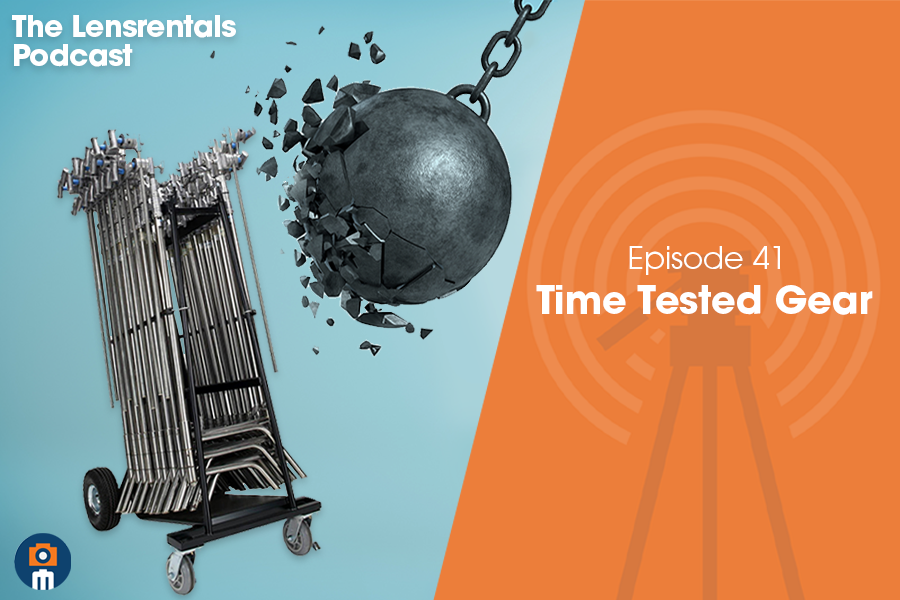 Today Ryan is joined by Roger and Joey, who are part of our in-house repair team, and they are among those who know the most about which photo gear breaks down more frequently and which are “bulletproof”. Lensrentals receives and inspects around 20,000 items a week and as careful as we and our customers try to be, it’s inevitable some of those items are going to break down. Today we’re recommending time-tested photo gear, and get to the bottom of why some products hold up better than others. But while we listen to this week’s episode, lets also talk about some of the discussions throughout the recording in a little more depth.

When you start paging through a B&H Photo page, you’ll see that a number of products have newer versions, redesigns, etc etc. While these product refreshes from Mark I to Mark II and beyond usually come with a new standard of sharpness or new feature sets, they also usually come with a number of fixes that help the general durability of the equipment. From changing how one board is soldered to another, or changing the basic design of a battery compartment to handle the use and abuse on the field, there have been a few generational changes that are worth mentioning.

We’re particularly proud of one update, which is the change of the battery door on the Blackmagic Pocket Cinema Camera 4K. We’re proud of this change in particular, because we were among the first to notice its defect, and swapped out all of our own cameras with a custom 3d printed version that we designed in-house. Since finding the defect, Blackmagic reached out to their customer base and offered a free swap out of a newer, better-designed door.

While I’d be willing to bet that there are no products in this industry that are actually bulletproof, there are a number of products that just hold up better than others. Products that are metal and mechanical will generally hold up really well over time. I’ve never had anyone have a C-stand break, especially if it’s of higher quality like a Matthews, Avenger, or Kupo. But the same applies to lenses – the less electronics in the lens, the better it will probably hold up over time. Manual focus lenses are going to last longer, because the focusing is dependent on the user, and will only go out of sync if your own vision does.

The same methodology applies to prices of gear. More expensive gear will usually hold up better than cheaper gear – which is expected. Lenses from Leica will generally hit our repair tables less, where budget-friendly brands like Rokinon need adjustments far more frequently. When purchasing gear, you really need to measure the price verse expectation metrics, to find out what is best for you. For example, it still might be more cost-effective for you to buy 5 Rokinon lenses over 10 years than it is buying a single Zeiss.

If your gear does break, there are a number of professional services that allow you to send in your equipment and get it repaired, sometimes at a discount. While several people have requested that we open our own repair facility for public repairs, it’s just not something we have the time and workforce to do. However, many manufacturers do offer platforms for repairs, so let’s talk about a couple of options.

Sony Professional Services & Support
Sony’s program is just called Professional Services and Repair, and doesn’t have nearly the frills as the CPS or NPS systems. However, there is no membership fee for their program, and as long as your product is in warranty, Sony is able to offer you a repair as part of that warranty.

When is Broken too Broken?

Eventually, you have to ask yourself when is broken too broken? Different parts of gear are expensive, and sometimes you need to just cut your losses. There is no sense in fixing a front element of a $600 lens if it’s going to cost you $450. So when do you determine that you should cut your losses?

Each scenario is unique, but there are some things that are generally more expensive than others. For example, front elements of lenses are generally incredibly expensive to replace, and it might be worth putting a UV filter or attaching the lens hood if you think the lens’s front element might be in danger. Additionally, many manufacturers have their input ports attached directly to their mainboard, so a quick tug on an HDMI or USB cable can easily result in a costly repair. To prevent those things, I personally recommend products like the TetherBlock or even a JerkStopper. There is no telling how much a repair can be, I’ve personally had expensive lenses come apart into half a dozen pieces, and the repair only is a couple of hundred dollars, whereas smaller issues have resulted in incredible expensive repairs. Fortunately, most of the repair centers will offer you an estimate on your repairs.

Listen to the episode above to hear even more stories and get more recommendations as to what gear holds up, and what doesn’t. And if you have any questions, feel free to chime in using the comments section below.

1:00 – Starting with lenses, Zeiss is an example of a hearty lens manufacturer due to the lenses being mechanical instead of electronic, not having image stabilization units (except in some Zeiss branded items that aren’t “true” Zeiss) and are appropriate to their prices.
2:40 – Can electronic failures be fixed? Well, it depends on the manufacturer, some IS units we can replace, but some have to be reprogramed using proprietary software we can’t access.
3:00 – The difference between photography as a skilled trade vs “a think you do” according to Joey is being able to get good images without autofocus, like they did pre-1980s. Pre-focusing, evolved into auto-focus thanks to automation and electronic lenses.
4:10 – With the advent of automation, everything becomes more accessible, and anyone can pick up a camera and make a good photo. In Joey’s opinion that doesn’t mean that they’re bad photographers, it just means they haven’t studied that craft long and hard enough to really make the camera do anything they want it to do.
5:15 – We aren’t saying that if a lens is manual and has no electronics that it’s reliable. Roger thinks that boutique and crowd-sourced lenses are disposable because there aren’t parts or people to service them.
6:30 – Roger and Joey shoot and own a few Rokinon and like them for what they are, but they also know they won’t last forever and will need to be replaced at some point. Broadly speaking, if you’re looking for a lens that will last for a long time, look for as many manual mechanical features as possible, Ryan advises. And consider losing any electronic feature you can do without.
7:30 – Most people do want image stabilization, electronic aperture, and autofocus though, so pro-level series lenses are what we recommend here. The big names, and now also Sigma and Tamron too. Also, the front element is important to keep in mind too, what used to be a plain piece of glass is often a lot more complicated these days, which if it needs to be replaced could cost a whole lot more than in days past. We highly recommend good filters, here are a few of our favorites. And here are more thoughts on filters we’ve had over the years: UV Filter for Protection and rating the UV filter brands.
9:30 – At one point, 30% of our Sony 70-200s were in repair at any given time, a good example of how when there is a lot of new kinds of tech in one lens it’s often got a lot of kinks that get worked out in the second and third generations of that product.
10:25 – The Canon 5D MkIV has been time-tested and refined over past generations. We’ve easily had over 1,000 come into our rental rotation and then sold as used, giving us a really large sample size to look at for durability, and it’s held up really well. Inversely, GoPro’s can get pretty beat up, but that’s not as much a product design flaw as it is the nature of event that those types of cameras are used for.
15:00 – Iterative changes come generation by generation as manufacturers figure out what is more prone to fail or break when in use. We loved the Nikon D750, the equivalent to the Canon 5D MkIV, it never broke! Getting rid of the CF card slot lead to that improvement for sure.
16:00 – We used to spend a lot of time in repair replacing broken and bent CF card pins, always because someone tried to put a card in where one of the holes got filled and it bent the inside of the camera, which was soldered to the mainboard. So if you jam a card in and tear it up, it’ll be $500+ to replace.
18:25 – Joey mentions that despite his personal feelings toward Pentax, they really make some tough cameras that just don’t break.
20:10 – BREAK
20:50 – Our favorite time-tested lights, are Paul C Buff B800, and Einstein lights. And we appreciate their great repair department also. LED lights ship well, but in general, big strobes don’t hold up a ton, not that most people are shipping their gear around the country like we are.
23:15 – As far as flashes and speed lights go, they don’t break very often but they can burn out and it’s full disassembly of the head to replace the tube once it does. Canon and Nikon hotshoes tend to break from being dropped. Sony flashes have plastic feet which have exposed contacts at the front that get bent often, and we don’t love the contact design in comparison to metal hotshoes.
25:25 – Ryan’s favorite item on this list is C-stands. They are solid metal things that weigh pounds versus light stands which weigh ounces. And don’t forget sandbags!