The GoPro Fusion is a dual-lens 360-degree camera that records up to 5.2K 30 fps video or 18MP RAW photos to two microSD cards. It’s the predecessor to the GoPro Max. Key features include:

360° Spherical Video Up To 5.2K. The GoPro Fusion records 360 degree spherical video in resolutions up to 5.2K 30fps & 3K 60fps via an offset, two-lens design. The camera is also capable of capturing 18MP spherical photos in RAW and JPEG formats. Continuous video recording time tops out at a maximum of 80 minutes, but expected time will be reduced by enabling WiFi and other features. Video recording requires two U3 rated microSD cards.

Four-Channel Audio. Video recording is accompanied by four channels of audio for what GoPro calls “spherical surround sound.” It’s not a full-fledged ambisonics audio solution, but it will provide a more immersive sound field than what is provided by traditional on-camera GoPro mics.

Overcapture Video Cropping. Use the built-in “Overcapture” feature to crop into the 360° video for a more traditional 1080p or 720p shot that can be directed around the spherical video field. Using the GoPro app, videos can then be saved or uploaded to a wide range of video platforms.

Rugged, Waterproof Housing. GoPro has been the go to for durable action cameras for over a decade, and they continue the tradition here. The waterproof housing found on the Hero5 and Hero6 is the inspiration for the Fusion body and means the camera is waterproof up to 16 feet. 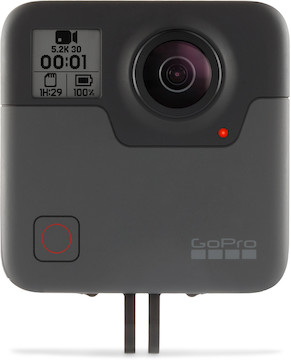 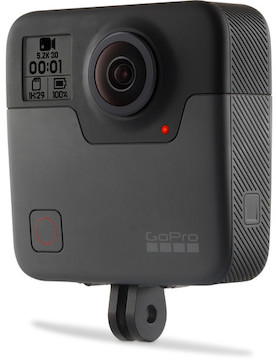 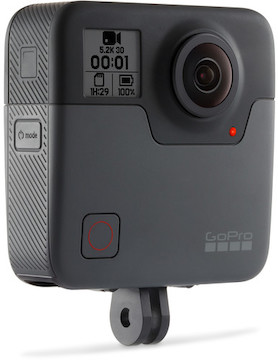 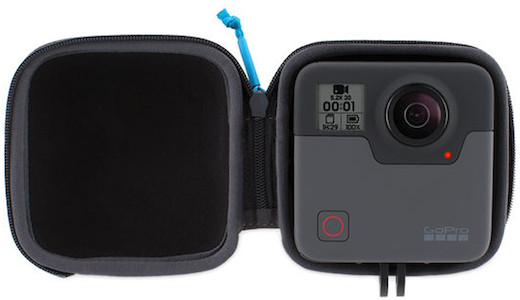