The GoPro Supercharger is a wall charger that lets you simultaneously charge two GoPro devices or other USB Type-C and Type-A devices. Key features include:

Dual Charging. The GoPro Supercharger’s USB Type-C and USB Type-A ports let you simultaneously charge two GoPro devices or other compatible USB devices. This means it can charge two USB-C cameras or devices if you provide a USB-A to USB-C cable.

Optimized for GoPro Devices. The included USB 3.1 Type-C to Type-C cable lets you charge a GoPro Karma Grip up to 70% faster; GoPro batteries up to 45% faster; and a GoPro HERO8 Black, GoPro HERO9 Black, GoPro HERO10 Black, or GoPro HERO11 Black up to 20% faster. It also lets you continuously power your GoPro during long shoots, such as time-lapses. 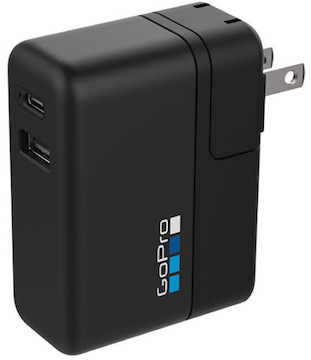