XT Upgrades This mid-range wireless kit features the same 3G-SDI and HDMI inputs and wireless video transmission range rating as the previous Teradek Bolt Pro 1000 but is housed in a redesigned lightweight, aluminum chassis with a transmitter-integrated ARRI rosette. Other improvements include dual SDI outputs for the receiver and pass through power compatibility.

V-Mount & NP-F/LP-E6 Powered. Each kit will include one D-Tap to 2-pin Lemo cable for powering the transmitter and one 18W 6-foot AC adapter for powering the receiver. Additionally, we include one V-Mount male and one V-Mount female plate attached to the receiver unit for standard v-mount brick batteries. On the transmitter, we include one Sony/Canon bidirectional battery plate attached for powering via your choice of Sony L-series or Canon LP-E6N battery. Do note, batteries / chargers are not included with the kit but are available for rent separately.

Realistic Wireless Expectations. While this kit is rated for wireless transmission up to 1,000 feet without break-up or image degradation, performance varies greatly from one location to the next. In our experience, we’ve found use at the maximum distance generally unreliable under normal circumstances due to RF interference and recommend stepping up to a long-range option or pairing with an Antenna Array when achieving long distance transmission is critical. 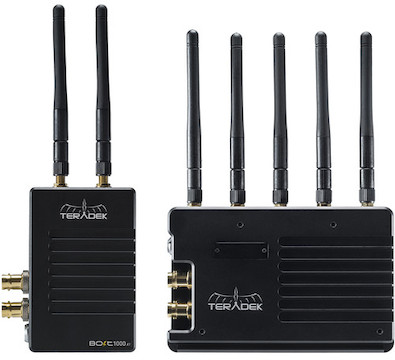 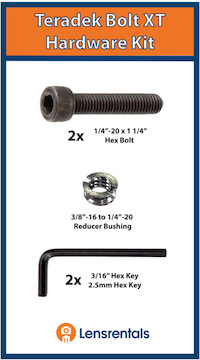