Mixing Camera Systems: Our Guide on How to Use Adapters Properly 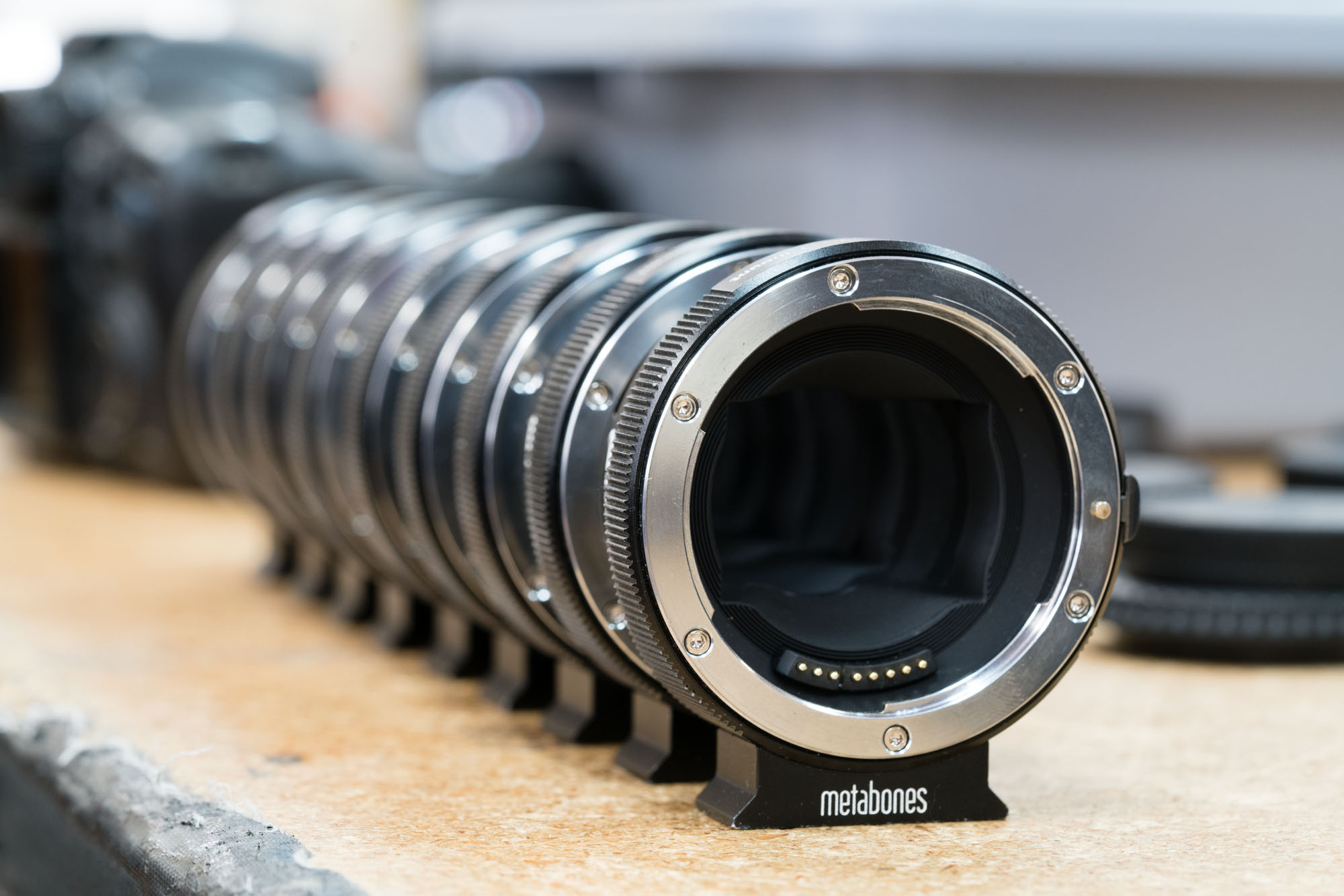 Mirrorless cameras have become incredibly popular these days, saving a lot of users from the size and weight of bigger SLR systems out there. As consumers make that switch, they often want to bring their current lenses along for the ride. Thanks to shorter flange distances, this is physically possible, but in practice, it’s not as simple. Because of that, it felt necessary to explain the differences, the challenges, and what you might not know when going into a new system when a handful of adapters. Let’s break down the most popular options out there that we carry.

To start, we’re mainly talking about the following three camera systems that make adapting easier than the others: Sony E/FE mount, Micro 4/3s (Olympus and Panasonic), and Fuji X mount. Lenses from Canon, Nikon, Leica, and Sony’s SLT lineup, as well as third party lenses in those mounts, are all able to be adapted, with some degree of success.

Let’s start with the simplest, Fuji X mount adapters. We currently only carry two adapters, one for Nikon lenses and the other for Leica M mount lenses: The Metabones Nikon G to Fuji X Speed Booster Ultra Adapter, and the Fuji M-mount Adapter for X-mount camera by Fujifilm. 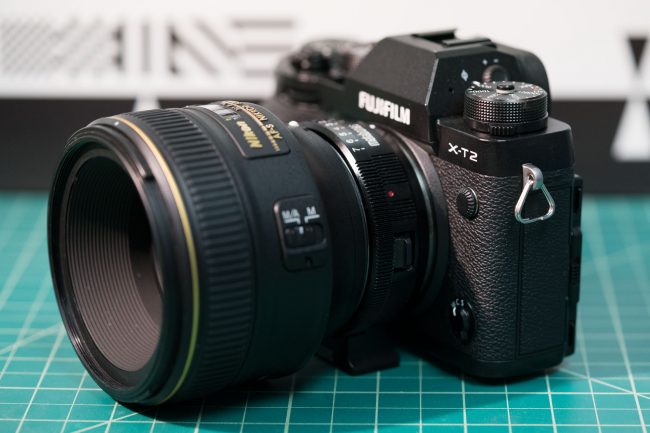 Both of these are mechanical adapters, meaning there are no electronic connections for things like autofocus and stabilization. When using Nikon lenses on the Metabones Speed Booster, the aperture is controlled by a ring built into the adapter, but precise aperture demarcation is unavailable. Manual focus and manual aperture control can be used with any Nikon lenses except the newest E series lenses that have electronic apertures. We currently know of no adapter for Fuji that will give aperture control with those lenses, so be sure to keep that in mind when looking through the Nikon E series lenses. One upside to using the Metabones Speed Booster is that the optical elements in the adapter both reduce the focal length and increase the aperture. The focal length reduction counters the crop factor of the APS-C sized Fuji sensors so that a 50mm lens looks more like what you’d be used to when using it on a full frame camera. But since it’s a focal reducer, the Speed Booster can’t be used with DX lenses. You’ll have to stick to full frame lenses. 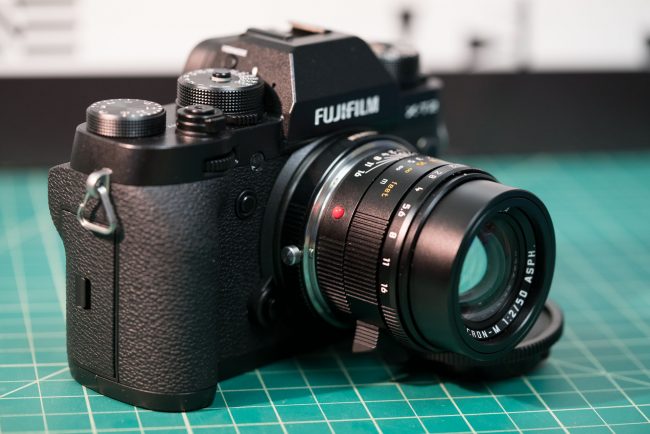 The X mount to Leica M mount adapter is even simpler. It’s just a piece of metal of the right thickness. All M mount lenses will work with this adapter but do keep in mind that all Fuji mirrorless cameras have APS-C size sensors. If you’re looking for full frame equivalence, remember to apply the 1.5x crop factor to your focal length.

Continuing in reverse order, we have several micro 4/3s adapters, for Canon, Nikon, PL mount, and M mount lenses. Like Fuji above, the Nikon options are mechanical only, so the same caveats apply here. We have two options: the Novoflex Nikon G to Micro 4/3 Adapter, and Metabones Nikon G to Micro 4/3 Speed Booster XL Adapter. 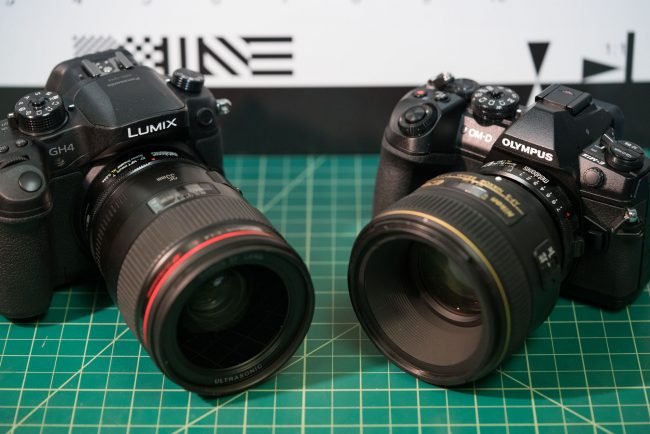 The first, by Novoflex, is just a basic adapter, so remember to account for the 2x crop factor when trying to find full frame equivalents. Since the Novoflex adapter has no optics in it, you can use FX and DX lenses with it. Both will cover the smaller micro 4/3s system, no problem. The Metabones we carry is the Speed Booster XL, which has a .64x focal length reduction, meaning a 1.28x crop factor for stills, and 1.5x crop factor for 4k video. With all of the Metabones adapters we carry, you’ll want to make sure they’ll fit your particular micro 4/3s camera since some of them only work with specific models. Metabones has gotten better about compatibility issues like that as they continue to put out new versions of their adapters, but there is still quite a bit of segmentation in their adapter lineup.

The M mount adapter for micro 4/3s is just like the one for Fuji—a simple piece of metal; called the Micro 4/3 camera to Leica M Lens

We also have a PL mount adapter, that’s also a dumb piece of metal, albeit a little more complex: the Wooden Camera PL Lens to Micro 4/3 Adapter

With both of these, you have manual aperture and focus control.

They function about the same, the only difference being how much they reduce the focal length of the attached lens. The Metabones Ultra is .71x, and the Metabones XL is .64x. Metabones has seen fit to make their adapters firmware upgradable, and they’ve also managed to figure out how to make Canon lenses autofocus really well on micro 4/3s cameras. As firmware updates are released, performance with these adapters gets better and better. With better AF systems in newer m4/3s bodies, EF lenses are just about as snappy as they are on native Canon bodies. So if something seems wonky, check the firmware first.

And that brings us to Sony. Oh Sony, you are the king of adapters. While there are the standard dummy adapters for Nikon, PL, and M mount, there are also a couple of outliers for Nikon and M mount: the Vello Select Nikon F to Sony E Auto Lens Adapter (LAE-SE-NF) and TechArt PRO Leica M Mount to Sony E-Mount Autofocus Adapter.

The Vello adapter promises AF and aperture control with certain AF-S Nikon lenses on certain late generation Sony bodies. They have a short list of lenses and bodies that work, which you’ll want to check on their website.

I wish I could say this adapter works great, but it’s pretty hit or miss. The firmware can be updated, so it’s always possible for things to be better. But for now it works sometimes, and that’s the best it’s going to do. Don’t expect this to work on your high end paid shoot. 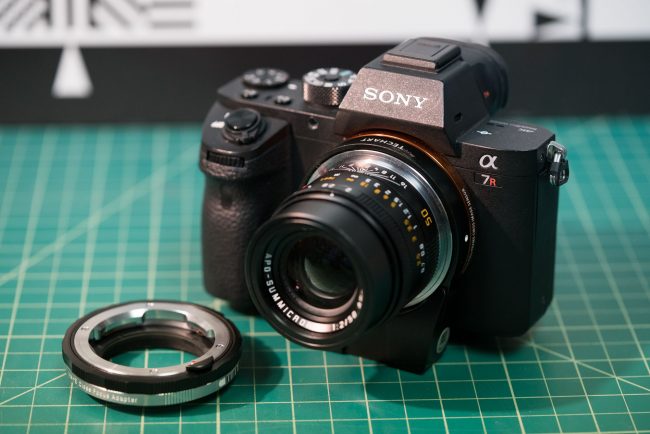 The TechArt adapter, however, is something of a marvel, at least on the right camera. It’s currently only recommended for use with the Sony a7II and Sony a7RII, both of which have phase detection autofocus. The latest firmware update for it has improved stability and performance. And did I mention it turns manual focus lenses into autofocus lenses? IT DOES! And by adjusting the manual focus on the lens, you can change the close focus. It’s a win/win.

For Nikon, there are the standard Metabones adapters, which the only thing to be careful of there is to avoid using Speed Boosters on full-frame Sony bodies. Speed Boosters are only meant to cover APS-C sensors. 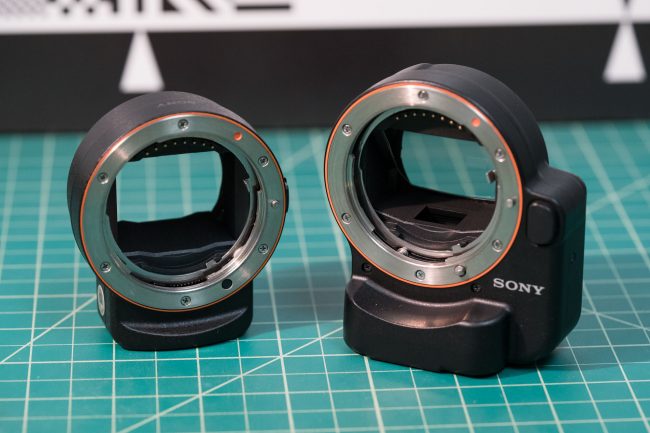 Both of these provide full frame coverage with full frame A mount lenses. The main difference is that the LA-EA3 relies on the camera’s AF system to control the lens, and the LA-EA4 has its own AF module, very similar to the a99 AF module. The LA-EA4 also has its own focus motor, so all A-mount lenses will work on it. The LA-EA3 is best used on PDAF cameras like the full frame Sony a7II and Sony a7RII, and crop frame Sony a6000, a6300, and a6500, with SSM lenses. For all others, stick to the LA-EA4.

And that brings us to Canon EF mount. This has become a Pandora’s box of sorts. The two “best” options are Metabones and Sigma. I say “best” in quotes because, well, after lots of experience with Metabones adapters, we’ve seen fit to include this warning:

We can’t recommend this product for professional work. We reached this decision after Lensrentals folks and rental clients experienced repeated failures in the field. Though it might work much of the time, it’s our opinion that this product’s performance is too unpredictable to be trusted on high-value projects. Use for casual testing or try-before-you-buy purposes only. If you have any questions, please contact us. 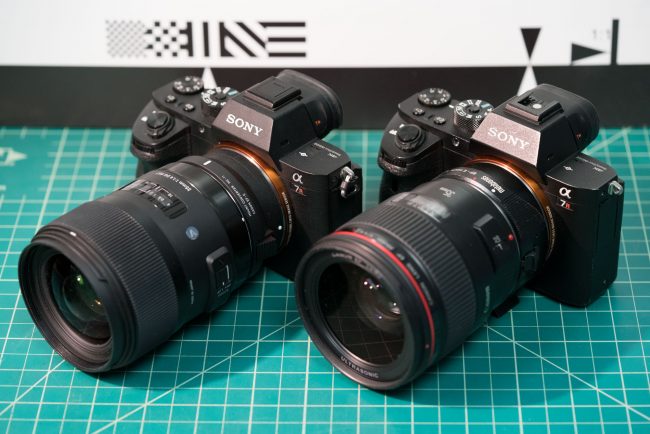 Ever since Generation IV of the Metabones adapters, firmware updates by the user have been possible via micro USB connection. Metabones puts out a firmware update every few months, and the updates do seem to help improve performance and stability. However, they’re still really damn finicky. Usually, aperture control works and IS works, but AF is very hit or miss. Sometimes it initiates focus but never actually locks, and sometimes it locks quickly but incorrectly. Sometimes it works flawlessly with one lens, but not another copy of that same lens. There’s no rhyme or reason to it, but there is one little trick that can sometimes get things working better; Just try the following steps:

This switches the mode of the Metabones adapter. Sometimes that does the trick. Sometimes you have to do this a couple of times to get things working. Sometimes it never works. Sometimes you just want to take the adapter off and throw it across the room.

The Sigma MC-11 works much better, as long as you’re using the latest generation Sigma lenses. I think the reason is pretty obvious why this adapter works better than the Metabones adapter with any EF lens. This is a Sigma adapter talking to Sigma lenses and only having to interpret Sony commands, whereas the Metabones is a third party trying to translate between at least two other companies. Something always gets lost in the translation. Does the MC-11 work with Canon lenses? Not officially, and not without some instability, so use it at your own risk. Got a full set of Sigma Art primes? You’re in luck! You’ll have fewer issues—still won’t be issue free.

So there’s your rundown of adapters. For some further reading on how adapted lenses perform on cameras they weren’t designed for, here’s a couple of previous blog posts that go in-depth on the subject:

There Is No Free Lunch, Episode 763: Lens Adapters

As always, it’s best to use native lenses whenever possible. One day, when mirrorless camera manufacturers have fully rounded out their lens lineups (I’m looking at you, Sony), these adapters will be less and less necessary.

Tweet
Posted in Equipment
Completing the Teardown of the Sony FE 70-200 f/2.8 GM OSS: Part II
Our Guide to Getting Started in Live Streaming